Columbo Goes to the Guillotine/Murder, Smoke and Shadows 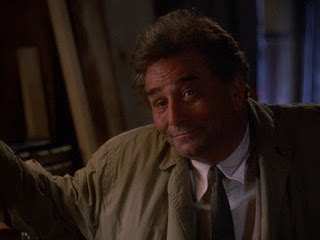 In 1978, after an astonishingly successful run on NBC, Lieutenant Columbo finally hung up his crumpled raincoat for good. Or so it seemed. But it was not the end after all. In 1989 Columbo returned in a series of TV movies, this time on ABC, which continued intermittently until 2003. I approached this later incarnation with trepidation, fearing that it would be a disappointment.

It actually gets off to a pretty good start with an ambitious locked-room mystery, Columbo Goes to the Guillotine. It combines stage magic (always a winner in my book), psychic phenomena and some delightful mockery of the CIA.

We have to wait a long time for Columbo to make his entrance but the setup for the murder is extremely clever, genuinely puzzling and thoroughly entertaining. Elliott Blake (Anthony Andrews) is a psychic and he’s being studied at the Anneman Institute for Psychic Research. This time they’re convinced they have a real psychic on their hands and they’re very excited. The Pentagon and the CIA are excited as well - this will give them a vital weapon against the commies (the episode went to air in early 1989 when the Soviet Union still existed).

However the CIA wants to be sure. And what better way to be sure than getting renowned magician and sceptic Max Dyson (Anthony Zerbe) to try to debunk Blake. Dyson has exposed countless fraudulent psychics and phoney mediums and if Blake is using trickery then he’s the man to uncover that trickery. Of course you can see how tis might lead to murder, and it does. And it’s a wonderfully ingenious murder.

The way in which Columbo unravels the mystery is entirely satisfying. The vital clues are provided by a fifteen-year-old aspiring magician named Tommy. Introducing a precocious kid is always a risk but in this case it works. Tommy’s most important contribution comes when he tells Columbo that it’s not that difficult to figure out how a trick is done as long as you always keep in mind that it is a trick. 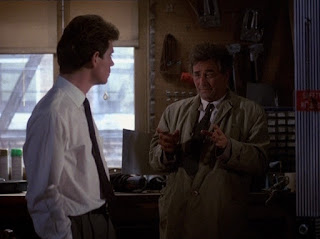 The murder is almost a perfect murder but there are a couple of tiny details that to Columbo’s mind just don’t quite fit. The plot is excellent, combining intricacy with the expected battle of wits between Columbo and the suspect.

Anthony Andrews is pretty good as the suspect constantly dogged by the rumpled homicide lieutenant. Pretty good, but I can’t help thinking this episode might have worked better with the two major supporting rôles reversed. Anthony Zerbe is a more colourful actor than Andrews and might have been a more formidable opponent for Columbo. Zerbe is an absolute delight as Max.

Oddly enough the one minor weakness in this episode is Peter Falk whose performance seems a bit mannered and a bit overdone. It had been eleven years since he’d played the part and he doesn’t seem entirely convincing. In the 1970s episodes Columbo was an outrageous but believable character, a very smart cop who was a bit eccentric but who carefully played up his eccentricities to put suspects off-guard. In this 1989 incarnation he just seems too obviously an actor. It’s almost as if he’s forgotten how he used to play the rôle and he’s trying too hard.

The magic stuff is terrific and the explanations of how the tricks were worked are fascinating.

All in all Columbo Goes to the Guillotine is surprisingly successful. Maybe not quite equal to the very best of the earlier episodes but still very good and very enjoyable.

Murder, Smoke and Shadows went to air in late February 1989. Once again there’s an attempt to make the setting as colourful, and as artificial, as possible. This time it’s the world of movies. Whizz-kid film director Alex Brady has a problem. A few years earlier when he and his friends Lenny Fisher and Buddy Coates were aspiring film-makers still making ultra low budget movies Lenny’s sister Jenny was killed when a stunt went wrong.  Alex panicked and left her to die. Lenny didn’t know about this but he does now and he’s arrived in Hollywood to wreck Alex’s career. Alex isn’t going to let that happen. 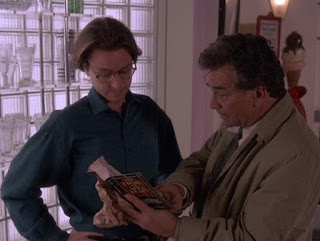 As in Columbo Goes to the Guillotine the murder is devious and ingenious. Alex’s attempts to cover his tracks are less clever. He knows a lot about making movies but as a murderer he’s at best a gifted amateur.

It just hasn’t occurred to Alex that the police are professionals at this sort of thing and they have vast resources. The ability of the police in general and Columbo in particular to piece together the story of a murder is as impressive as Alex’s ability to tell a story on film.

It’s another clever plot even if the theatricality is overdone at times. The ending is very theatrical indeed but it’s in keeping with the feel of the story.

Again Peter Falk’s performance seems not quite right. He just isn’t relaxing into the part they way he used to. Columbo’s malicious glee when he nails his suspect also seems a bit out of character.

A Columbo story depends a lot on the quality of the villain. Fisher Stevens as Alex is quite good but there is one big problem. At twenty-five Stevens was ridiculously young to be playing the part of a film director so well established that books have been written about his films. He looks even younger than twenty-five and comes across as being more like a precocious high school kid than a seasoned Hollywood veteran. Setting so much of the episode in Alex’s private little “boys’ club” hideaway with its train sets and pinball machines and soda fountain just makes him seem even younger. If only Stevens had been ten years older his performance might have worked splendidly - he certainly plays Alex as the kind of self-centred manipulative narcissist you’d expect to find in Hollywood. 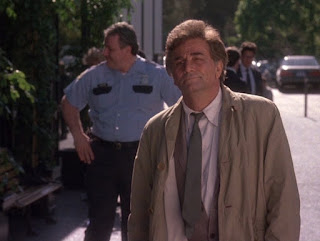 Alex is also a Columbo villain who loses his cool quickly and seems cocky in a teenaged way rather than the type of smooth confident murderer who might present a real challenge to Lieutenant Columbo.

Steven Hill plays a small rôle as a ruthless producer whom Alex has made the mistake of crossing and Hill's assured performance, while very entertaining, also serves to make Alex seem like a naughty schoolboy.

So this episode has some problems. It does have its strengths however. The film studio setting is used very effectively and the story is basically excellent. So it’s a mixed bag but still enjoyable.

Was it a good idea to resurrect Columbo? Probably not. Both these episodes are brave attempts and they’re reasonably successful but the magic is not quite there.