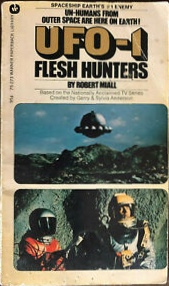 John Burke (1922-2011) wrote countless novelisations of movies and TV series in the 60s and 70s, including Moon Zero Two, based on Hammer’s extremely interesting movie of the same name. The Moon Zero Two novelisation is actually pretty good.

UFO was not just a fun alien invasion science fiction series - it also had a bit more psychological complexity than you might expect. A lot of the focus was on the personal price that had to be paid by people working for a top-secret organisation (called SHADO) set up to defend Earth from murderous attacks by UFOs. In particular there was a focus on the loneliness of command. The head of this organisation, Commander Straker, has to make frighteningly difficult decisions and he has to make those decisions alone. Even some of his subordinate commanders, such as Lieutenant Ellis (in charge of Moonbase), have to be prepared to sacrifice their personal lives if necessary. It was a surprisingly character-driven series.

The author spends the first third of the book giving us the setup - governments have known for years that alien invaders have reached Earth but they have to make sure that the public knows nothing about this, in order to prevent panic. Test pilot Paul Foster blunders across the truth, and he will face consequences.

While this part of the book necessarily involves a lot of info-dumps it’s hard to see how that cold have been avoided. Anybody who had seem the first few episodes of the series would have known all this stuff, but anybody who had started watching the series several episodes in, or anybody who hadn’t yet watched the series, was going to need to have the show’s fairly complicated premise explained.

Fans of the series would not have minded since one of the things they liked about UFO is that it wasn’t totally action-oriented.

The book also gives us an introduction to the most important characters from the series. Straker, the most interesting character of all, remains a bit of an enigma but that’s the type of man he is. He does not reveal his emotions. Not ever. 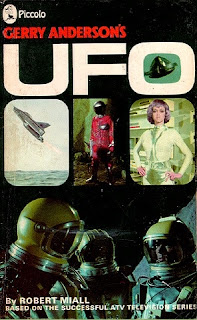 SHADO’s biggest frustration is that they have no idea why the aliens are attacking Earth. Then they get a lucky break. They recover an alien from a wrecked UFO. This answers some of their questions, and the answers are terrifying. And what they’ve learned just serves to raise more questions.

There’s a major security leak in SHADO, and there’s an ambitious plan by SHADO to discover the home planet of the aliens.

Burke shuffles the sequence of events around a little, with events from the second episode taking place before events from the opening episode. He has legitimate dramatic reasons for doing this however.

I generally enjoy TV tie-in novels but I have a strong preference for original novels based on a series rather than novelisations and this book is a good example of the potential problems with novelisations. It’s based on four episodes of the series and the novel is therefore very episodic with no strong narrative thread tying things together. Originally novels are often interesting because they offer a writer a chance to explore characters and situation in more depth and from slightly different perspectives. This book does not do this. We learn no more about the characters than we learn from watching the series. In fact, give the high standard of acting in the series and in particular given Ed Bishop’s subtle performance as Straker we actually learn a good deal less about the characters from the novel. The novel also feels incredibly rushed with no real dramatic tension or suspense.

While my experiences with original novels based on TV series has generally been quite positive I was rather disappointed by this book. The events described in the book seemed so much more interesting when watching them on the screen.

Unless you’re totally obsessive about collecting UFO memorabilia you’d be well advised to skip this book.