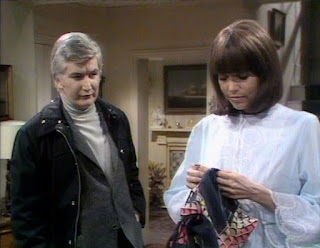 I purchased the complete series boxed set of Brian Clemens’ celebrated 1970s horror/thriller anthology series Thriller back in 2010. I’ve worked my way very slowly through it and I finally reached the end about a year ago. By the time I started this blog I’d already reaches season four. I’ve posted lots of reviews of the later episodes. And now I find myself wanting to revisit the earlier seasons. It is after all around twelve years since I’ve seen some of these episodes.

So if I’m going to do this I should start right from the very beginning.

Lady Killer is the first episode of the first season and was originally screened in April 1973. Lady Killer was, like just about every episode, scripted by Clemens.

Lady Killer starts in an English seaside hotel. Paul Tanner is romancing Jenny Frifth (Barbara Feldon) but we’re immediately suspicious of his intentions. He sneaked it into her room to get a look at her passport before making his first approach. Then we hear him talking on the telephone to a colleague or accomplice and we realise that for some presumably dishonest reason he is planning to manipulate Jenny into falling in love with him.

Which he has no trouble doing. Jenny is pretty and seems like a pleasant person but she’s obviously shy and lonely, and we know from that phone conversation we overheard that Paul has selected her specifically because she is a lonely lady.

Jenny is swept off her feet. Had she been less lonely and a bit more worldly she might perhaps have realised that this guy is just a bit too smooth and too charming and that he knows every trick in the book when it comes to playing with a woman’s emotions. Jenny is so emotionally starved that she agrees to marry Paul even though she’s known him for just a couple of days. 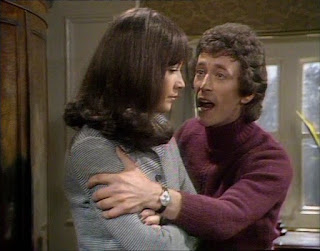 Gradually she notices little things, or little things are pointed out to her, and the seeds of suspicion are planted in her mind. The problem is that Paul is incredibly quick-witted and is able to provide a plausible explanation every time.

We know that Paul is up to something and it’s pretty obvious what his plan is. But don’t despair. Brian Clemens has a few very neat plot twists up his sleeve.

The casting is quite interesting. Robert Powell was an obvious choice to play Paul. No-one could do oily sinister charm and emotional manipulativeness better than Powell.

Jenny is played by Barbara Feldon. Yes, 99 from Get Smart. She gives a terrific performance, capturing Jenny’s unworldliness and vulnerability without ever allowing her to seem ridiculous or pathetic. And her performance is totally believable - Jenny reacts the way a rather lonely woman desperate for love would react.

The other major female character, Toni, is played by Linda Thorson, which is somewhat surprising since Clemens and Thorson had a fraught and uneasy relationship on The Avengers. Thorson is excellent and her performance is also believable - she has certain logical motivations but they’re complicated by emotion and Thorson makes Toni just sympathetic enough - we don’t approve of her actions but we can understand them.

The icing on the cake for me is the presence of T.P. McKenna, one of my favourite British character actors of that era, in a secondary but crucial role.

All the performances are extremely good and, most importantly, Powell and Feldon and Powell and Thorson work exceptionally well together. 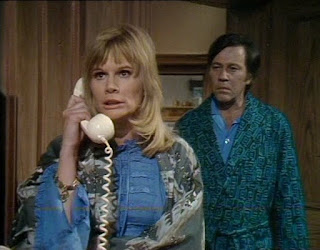 A mystery-thriller needs to have a coherent plot but it doesn’t matter if it’s a little far-fetched. That’s the nature of the mystery and thriller genres. In real life people rarely plan incredibly elaborate crimes, but that’s why real-life crime is boring. The mystery-thriller genre should have nothing to do with realism. As long as the plot has internal coherence there’s no need to ask yourself if anybody would really carry out such a complicated crime which apparently required three years’ worth of planning.

It’s a clever enough plan. Not dazzlingly original but the sheer effort and sacrifice and patience required to make it work are impressive. It won’t take most viewers very long to figure out what Paul’s plan is. That doesn’t matter because Clemens has a couple of very nifty little plot twists to spring on us in the third act. And those plot twists are very cleverly executed.

That’s so much here to enjoy but the greatest pleasure comes from the performances of Robert Powell, Barbara Feldon and Linda Thorson. They really are a joy to watch.

Lady Killer is a great way to kick off a brand new series.

Possession is episode two and already the series is shifting gears to keep us on our toes. Suddenly we’re in supernatural territory, with a haunted house story. With Thriller you could never be sure if there were going to be supernatural elements or not. And the supernatural could be handled in a rather ambiguous way in this series.

In this case the setup is a classic haunted house story. Successful businessman Ray Burns (John Carson) and his wife Penny (Joanna Dunham) have just bought a lovely old house in the country. 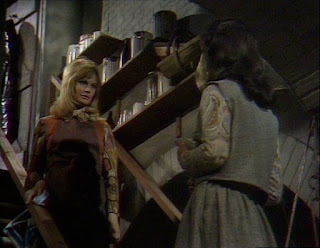 At first everything goes well, with just a few very tiny odd things that disturb Penny. Then there are problems with the central heating and the basement floor (which for some mysterious reason had been concreted) has to be dug up. A gruesome discovery is made, which seems to provide a partial solution to a 20-year-old mystery. This discovery also explains some increasingly odd events. There is a ghost haunting the house, but whose ghost? Is it the ghost of the victim or the murderer?

The obvious step is to get a medium to conduct a séance. As is always the case in movies and TV the séance turns out to be a seriously bad idea.

Penny is now quite frightened and Ray is pretty shaken as well.

And there’s the matter of the murder that takes place nearby. There’s no connection of course but it is an odd coincidence.

This story leads us up the garden path pretty effectively. We think it’s a very conventional ghost story but things are by no means as simple as they appear to be.

There are some clues as to what is going on, clues such as the killer’s fondness for whistling Greensleeves, but these clues can mislead us if we’re not careful.

It’s a clever variation on the haunted house theme.

So two very good episodes right at the start of season one.