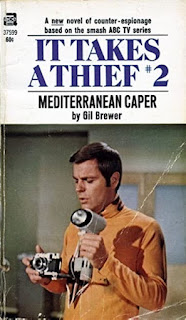 Published in 1969, Mediterranean Caper was the second TV tie-in novel based on the very successful 1968-1970 American TV spy series It Takes a Thief.

It was written by Gil Brewer, much better remembered as one of the great hardboiled/noir writers of the 1950s.

If you’ve never seen the TV series (and if you haven’t you should because it’s terrific) Al Mundy is a cat burglar facing a long prison sentence. One of those shadowy US intelligence agencies offers him a deal - he can stay out of prison if he agrees to steal for the government. He finds himself, very reluctantly, working as a spy.

He doesn’t like it. The SIA (the agency in question) is pretty ruthless. They offered him his freedom but he isn’t free at all. He’s under permanent house arrest and he has to do whatever they tell him to do. Sometimes he thinks prison would have been better - criminals have better ethical standards than intelligence agencies. But he has no choice.

In this case he has to steal a coded formula and he has to rescue a Soviet defector named Marina. Her defection went wrong and she’s fallen into the hands of the KGB. She’s being held somewhere in Marseilles. And the Red Chinese are after her as well.

And, as luck would have it, this Soviet defector happens to be a beautiful glamorous woman.

This mission turns out to be a very easy one. Too easy. He gets the formula but he loses it. He gets the girl but she’s the wrong girl.

It gets worse. Not only has Marina been captured, the bad guys have Miss Agnew as well. Miss Agnew is Al’s parole officer but she also works for SIA. She’s more or less his keeper. Al has a thing for Miss Agnew. His feelings are not reciprocated but that doesn’t worry Al. He’s sure that eventually his charm will win her over. But now she’s in the hands of a madman, the fiendish Red Chinese spymaster Hu Yang who has an obsession with American women. Al has a fair idea what Hu Yang plans to do to Miss Agnew and it isn’t a pretty thought.

TV tie-in novels were often written by authors who had only seen the original outline for the series in question and maybe the first couple of episodes. Sometimes they hadn’t seen a single episode. As a result the tie-in novels often have a slightly different feel compared to the TV series. Sometimes they’re a bit sleazier. That’s not the case here. But this novel does have more of a Bond movie feel than the series. Hu Yang is very much a Bond villain.

Brewer certainly does know how to tell an action-packed tale.

Brewer also captures the essential element of the series - Al is very unhappy about working for SIA. Al’s moral standards are flexible but he’s basically a decent guy. He likes stealing but he’s not keen on violence unless he has no alternative. In this novel Al really doesn’t care about the secret formula. He’s not unpatriotic but he’s not overly patriotic either. Politics bores and disgusts him. He does however very much dislike the idea of pretty girls falling into the hands of lust-crazed madmen. His main motivations are to do what he has to do to avoid getting sent back to prison and to rescue the two girls. If the SIA ends up getting that formula then that’s fine but Al doesn’t care.

Brewer was a noir writer so the idea of writing about a man forced into spying against his will would have had some appeal to him.

Mediterranean Caper is lightweight but it’s fun and breezy. Highly recommended, especially if you’re a fan of the TV show.

I reviewed the first season of It Takes a Thief a while back.