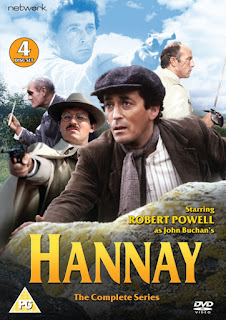 Hannay is a thirteen-episode (spread over two seasons) TV series featuring the hero of John Buchan’s classic thrillers, Richard Hannay. The series serves as a kind of prequel to The 39 Steps.

The episodes really have nothing to do with Buchan, apart from borrowing his hero. They’re all original stories. If you’re expecting the stories to be in the same class as Buchan’s novels you’ll be disappointed.

The stories are all over the place as far as tone is concerned. The best episodes are very lightweight and rely to an embarrassing degree on unlikely narrow escapes carried out by methods that are both silly and corny. These stories are much more like a cross between an Edwardian Boys’ Own Adventure Paper tale and an episode of Ripping Yarns. But they are fun in their own way. Other episodes are much more humourless and try to be serious. Many episodes are not spy tales at all but mysteries, some good while others are not so good.

The series does have one huge asset - Robert Powell as Hannay. He played Hannay in the 1970s movie version of The 39 Steps and he was by far the best thing about that film. In fact I’d go so far as to say that Robert Powell is the definitive screen Richard Hannay. Even better than Robert Donat in Hitchcock’s 1935 movie (which I rate as one of the ten best movies ever made).

At least he should be a huge asset. Unfortunately his performances are uncharacteristically restrained. A bit too restrained. If you’re going to put Robert Powell in an adventure series then you expect him to go totally over-the-top. You expect him to sparkle. But he doesn’t.

I can’t help thinking this series would have been much much better had it been made fifteen years earlier. For starters a younger more vigorous Robert Powell would have been a lot more fun. And it would have featured fewer ludicrously anachronistic social attitudes. 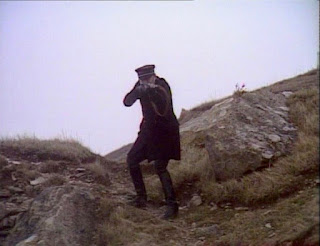 The biggest problem with this series is that not a single character behaves as you would expect people to behave in 1912. They’re all 1980s people wearing period costume. All the political, social and cultural attitudes are pure 1980s.

The characters we’re supposed to find sympathetic never express a single thought that is at variance with the orthodoxies of late 1980s social attitudes. This has the effect of making them seem self-satisfied and at the same time lacking in any actual personality. The characters we’re supposed to find unsympathetic come across as cardboard cut-out villains. Richard Hannay himself has no real personality whatsoever.

The TV series was shot entirely on videotape. Even the location shooting (of which there’s quite a bit) was shot on videotape. In spite of this looks it looks quite handsome. This is British TV at the tail end of its golden age so the costumes are terrific and it takes advantage of the abundance of superb character actors in Britain at that time.

The first episode, The Fellowship of the Black Stone, opens with Hannay getting shot in South Africa. He is left for dead and is found clutching a black stone. His would-be assassin was notorious German spy Count von Schwabing (Gavin Richards). And a fine melodrama villain he turns out to be. He doesn’t actually twirl his moustache before carrying out dastardly deeds but you know that he’d like to.

On the ship carrying him back to Britain Hannay encounters the Earl of Haslemere (David Waller) and the earl’s daughter, the Lady Anne. Hannay is charmed by Lady Anne, to say the least. 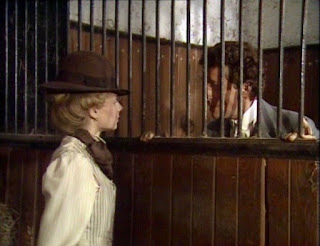 Hannay had worked for the British Secret Service but had left their employ some years earlier. He finds himself caught up in a spy drama anyway, with the Germans hatching dastardly plots and poor Hannay getting himself repeatedly captured, tortured and threatened with certain death. Fortunately, although the German secret service is very efficient their agents have never been taught to tie a knot properly. Hannay keeps escaping by slipping out of his bonds.

The highlight of this episode is Charles Gray as a senior Scotland Yard man.

It’s all breathless stuff with a reasonable amount of action. A fine episode.

As it happens there’s an immensely valuable diamond necklace sitting in the safe. And things will soon get complicated and dangerous.

Historical anachronisms are always a problem in series such as this. I have to say that in this episode I just didn’t buy Lady Madrigal’s behaviour. The story takes place shortly before the First World War. We assume it’s around 1912. I don’t believe any well brought up lady at that time would have risked her reputation so recklessly. It would have been social suicide and would have wrecked any chance she might have of making an even halfway respectable marriage. Had she been one of the Bright Young Things of the 1920s then I might have found it plausible. But not in 1912.

It’s still an amusing, clever and entertaining story with a certain amount of charm. 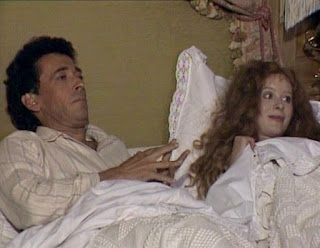 In Voyage into Fear Hannay is accosted in an art gallery by a young girl who insists that there is a dangerous man who is trying to kidnap her. She insists that Hannay should pretend to be her father, to get her out of the gallery and back home safely. Hannay is inclined to think it’s all nonsense until he realises that the girl might be telling the truth.

Then things start to go badly wrong, Hannay and the girl are drugged and they wake up on board a ship, having absolutely no idea where they are. This is a really fun episode.

Death With Due Notice is a murder mystery story. Several men have received anonymous threatening letters, all in the form of quotations from Shakespeare. A routine episode that doesn’t really have the right flavour.

Act of Riot is one of the worst pieces of television I have ever seen in my life. A clumsy embarrassingly obvious script, stodgy direction, heavy-handed political messaging, atrocious acting, leaden pacing, a total lack of action, dull and humourless. Robert Powell is clearly bored and uninterested and I can’t say that I blame him.

The Hazard of the Die is better. At least it’s a spy story. The wife of a Cabinet Minister loses heavily at the casino at Monte Carlo and is trapped into espionage. The first problem is that there really aren’t enough plot twists. It’s a bit predictable. The second problem is a total lack of action. This is an adventure series. We’d like to get some adventure. It all falls just a bit flat.

So the first season of six episodes is a mixed bag. The first three are terrific fun. The next three are pretty dull.

The second season opens with Coup de Grace. Hannay gets involved with a woman and he’s charmed by her, and he meets charismatic hard-driving businessman and gambler Sir Marcus Leonard (Anthony Valentine). And Hannay gets caught in the middle. With Anthony Valentine as guest star you assume you’re going to be in for some fun and Valentine certainly delivers the goods. What’s strange is that Robert Powell allows himself to be totally overshadowed by Valentine. It’s a crime plot rather than an espionage or adventure tale but it’s a decent story. 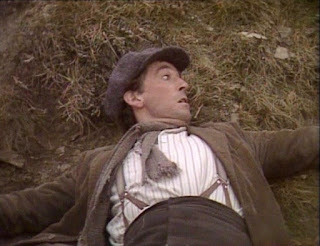 The series gets right back on track with The Terrors of the Earth. Not only is it a spy story, it’s a totally outrageous spy tale. There’s actually some action and Hannay gets to be much more energetic and pro-active than usual. And Robert Powell’s performance has some zest. A very entertaining episode.

In Double Jeopardy a rich dying man entrusts Hannay with some diamonds. Hannay is to pass them on to a man named Desmond Leigh but only on certain conditions. This puts Hannay in a very awkward spot. Leigh has failed to meet those conditions but he has a young wife. Then the plot gets really convoluted with a murder and a kidnapping and Hannay under suspicion and all manner of conspiracies. The plot might be convoluted but it’s quite nicely constructed with some fine twists. A very good episode.

The Good Samaritan gets off to a promising start. Hannay is in central Europe, he’s on a train and he’s just met a beautiful mysterious woman. There’s a shady oilman of indeterminate nationality. And oh yeah, there’s a corpse. And a vanishing lady. It’s hard to go wrong with those ingredients. This is a terrific episode which movies along at break-neck pace.

In That Rough Music an old friend of Hannay’s dies and leaves his estate and fortune to his half-African daughter. A totally unconvincing story told in a very clumsy manner.

The Confidence Man is a major improvement. Hannay comes to the rescue of a music-hall proprietress menaced by an extortion racket. Hannay’s initial attempt to help ends in disaster. He realises he’s going to have to be much cleverer and he turns out to be a rather goof confidence trickster, all naturally in a good cause. A lightweight episode but it moves along briskly and it’s fun.

Say the Bells of Shoreditch involves a disappearing bridegroom. The young man works for his father who runs a shipping and insurance empire. There’s something strange going on in the company with all sorts of rumours flying around.

The jilted bride is Hannay’s goddaughter so he feels compelled to find the missing young man. Hannay discovers an ingenious and dangerous conspiracy.

Most of the episodes are quite entertaining but the series just doesn’t quite ring true. It’s very very uneven. The bad episodes are absolutely terrible but the good ones are very good. And the good episodes do outnumber the bad.

Network have released the complete series on DVD.
Posted by dfordoom at 09:06