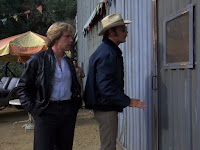 It's tie to once again look back over the year just gone. I was almost going to say that this hasn't really been a bumper year for me as far as cult television is concerned, but having a quick scan through my 2022 posts I find that in fact I discovered quite a few exciting series that were new to me.
My most exciting cult television find in 2022 was undoubtedly the 1983 first season of Simon & Simon, a delightfully quirky and charming private eye series.

My other exciting discovery was the Japanese anime TV series Ghost in the Shell Stand Alone Complex. It was made in 2002 so it's a bit outside the normal time frame for this blog but it's a terrific science fiction series.
There was also the 1957 cop drama Decoy, the first cop series entirely focused on the work of a policewoman. Not an action series but intelligent, sensitive and occasionally provocative. In fact it's bet series ever made about a female cop.
And this was the year I discovered Miami Vice. This is my kind of TV show - style, style and more style.
So overall, not such a bad year.
Posted by dfordoom at 02:49