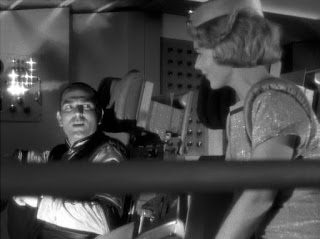 Three more Outer Limits season 1 episodes from 1964. They’re not among the best episodes but even lesser episodes of this series are pretty good and pretty interesting.

Second Chance was written by Sonya Roberts and Lou Morheim and directed by Paul Stanley. It went to air in Match 1964.

A group of people are drawn to a carnival spaceship ride. They don’t know why. It’s just a silly fake spaceship. They get quite a surprise when the fake spacecraft actually lifts off and they find themselves in deep space. The carnival ride has been transformed into a real spaceship by an alien from a distant planet.

The people on the ride are a motley assortment and it’s difficult to understand why the alien wanted them aboard. That will however gradually become clear.

This is yet another example of The Outer Limits giving the alien invasion idea a major twist. And it’s another example of the series treating aliens as beings who might not necessarily be hostile. The idea of a carnival ride turning into a nightmare ride through outer space is very cool.

And, as so often in this series, there’s more emphasis on character than you’ll find in most TV sci-fi. The plot is mostly a device to allow the characters to learn something about themselves.

The Children of Spider County 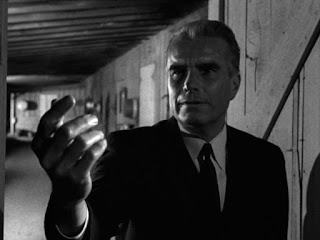 In The Children of Spider County the Space Security agency gets involved when four young men disappear. There are extraordinary links between these four men that suggest a possibility that seems insane, but the links just can’t be explained by coincidence and Space Security takes the matter seriously. There’s also a fifth young man, Ethan Wechsler, and he’s facing a murder charge.

This episode illustrates some of the weaknesses of this series - cheesy makeup and iffy special effects. But The Outer Limits never worried about stuff like that. If they felt that the monsters needed to be shown, they’d show them, and if they looked cheesy the producers felt that the scripts would be good enough to compensate. And usually they were.

This episode works because it takes the alien invasion idea and gives it lots of interesting twists, and lots of ambiguity. Cleverly, the ambiguities are never fully resolved. There’s some slightly cringe-inducing speechifying about accepting differences but there are some genuine moral and emotional dilemmas.

Not one of the great Outer Limits episodes but even the less-great episodes of this series tended to be very good and very thoughtful. 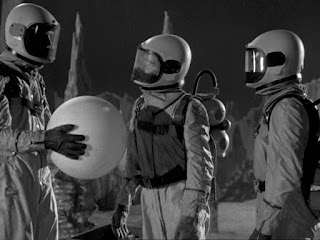 Moonstone begins, naturally enough, on the Moon. American astronauts discover an artifact which is clearly not natural. At first they assume the Russians must be behind it but it soon becomes apparent that this small white sphere contains a number of alien intelligences. Are these aliens friendly or hostile? They seem benevolent. The aliens have a problem, and it’s a big problem. And it becomes a problem for the crew of the lunar mission as well. The commander of the lunar mission, General Stocker, will have to make a tough decision. He had to do that once before and it had consequences for which his second-in-command, Major Anderson, has never forgiven him.

It’s that decision made by General Stocker in the past that provides the main thematic interest of this episode. It’s all about decisions and decisions that have to be made by both the human and alien characters. The aliens simply function as a catalyst for major personal upheavals involving General Stocker and Major Anderson and the mission’s chief scientist, Professor Diana Brice (Ruth Roman). There’s a romantic drama between the general and Diana Brice but Major Anderson seems to be mixed up in it as well.

It’s not very profound but it is a bit more than just a space adventure yarn.

The special effects are very cheap-looking but the aliens are rather cool. These are aliens who really look profoundly alien, rather than being guys in rubber suits or cheesy makeup.

The acting is good enough to make the characters at least a bit more than cardboard cutouts.

Not a great episode but it’s solid enough.

Final Thoughts
I've described these as lesser episodes but I think they're all worth watching.

I’ve reviewed a number of other episodes of The Outer Limits, including The Sixth Finger, Don't Open Till Doomsday and ZZZZZ and The Man Who Was Never Born and O.B.I.T.
Posted by dfordoom at 16:09