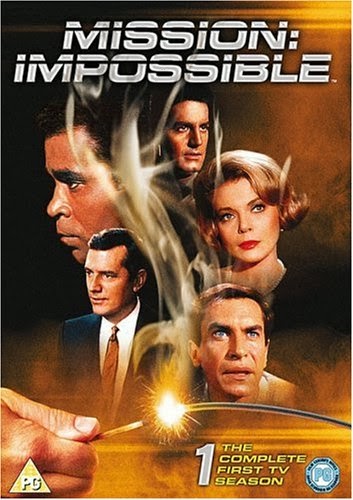 Mission: Impossible was one of the most successful spy series of its era, running on the American CBS network from 1966 to 1973.

There are broadly speaking two approaches to the spy thriller. There’s the gritty realist approach, usually with a hint of cynicism, typified by British series like Callan. Then there’s the action/adventure approach, typified by the Bond films and by most British and American spy TV series of the 60s such as The Avengers, The Man From U.N.C.L.E. and It Takes a Thief. Mission: Impossible belongs firmly in the action/adventure camp. The action/adventure type of series can be done in a tongue-in-cheek manner or it can take itself fairly seriously. Mission: Impossible takes itself fairly seriously, more seriously than The Man From U.N.C.L.E. for instance. It is most certainly not a spoof, no matter how outrageous some of the plots might become.

I’d seen numerous episodes of Mission: Impossible years ago but it wasn’t until I bought the DVD boxed set than I realised I had never seen any of season one. So it’s with season one that this review is concerned.

The main difference is that in the first season the leader of the Impossible Missions Force is Dan Briggs, played by Steven Hill. This came as quite a shock to me since I’d been so accustomed to the later episodes with Peter Graves. The other, reasonably minor, difference between the first season and the second is that the opening sequences in which Dan Briggs gets his orders and then has to destroy them are more varied, and more imaginative, than in the later seasons.

Apart from Dan Briggs, the basic team is the same as in the second and third seasons. Barney Collier (Greg Morris) handles the gadgetry, Willy Armitage (Peter Lupus) provides the muscle, Cinnamon Carter (Barbara Bain) uses her feminine wiles and Rollin Hand (Martin Landau) uses his mastery of disguise and illusionism. Landau is always billed in season one as Special Guest Star although he’s in almost every episode. He was originally intended to be an occasional character but quickly became a regular. Landau and Bain would leave after season three and the series would change slightly but it’s season one we’re concerned with here. 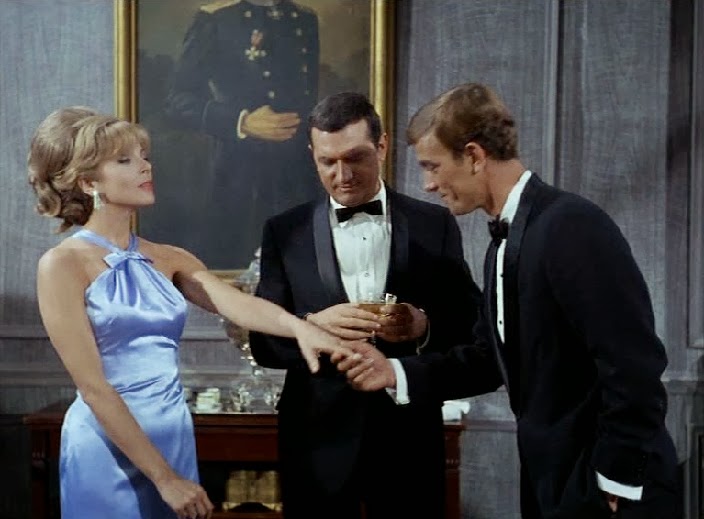 In his book on British action/adventure series of the 60s Saints and Avengers James Chapman singles out Mission: Impossible as an example of a series that conforms rigidly to the conventions of the genre and adheres strictly to a set formula, in contrast to a series like The Avengers which in its later years gleefully played around with genre conventions. In general it’s a fair observation. Of course it’s an observation that applies to the vast majority of TV series, but Mission: Impossible is a fairly extreme example. Not just the content but the tone of the series remains very consistent, never becoming really dark but never veering into the spy spoof arena. There’s a small amount of humour, but not much, and that remains constant in just about every episode.

Of course working to a rigid formula provides its own challenges. Somehow you have to stick to the formula without letting it get stale, and without letting the audience realise you’re working to a formula. The favoured way of doing this in the 60s was to ship your spies off to a different exotic location for each episode. Of course even American TV series did not have the budgets actually to do this, so both British and American series relied on stock footage, clever set dressing and heavy (and usually rather unconvincing) accents. Mission: Impossible uses these techniques in practically every episode.

There are a couple of interesting and slightly unexpected elements in this series. The first is that the IMF is usually aiming to discredit enemy spies rather than kill them. This is in fact the preferred technique of real-life intelligence agencies in peacetime. Killing agents of a foreign power tends to cause unpleasant diplomatic incidents, and that in turn tends to cause intelligence agencies to get major grief from their own political masters. 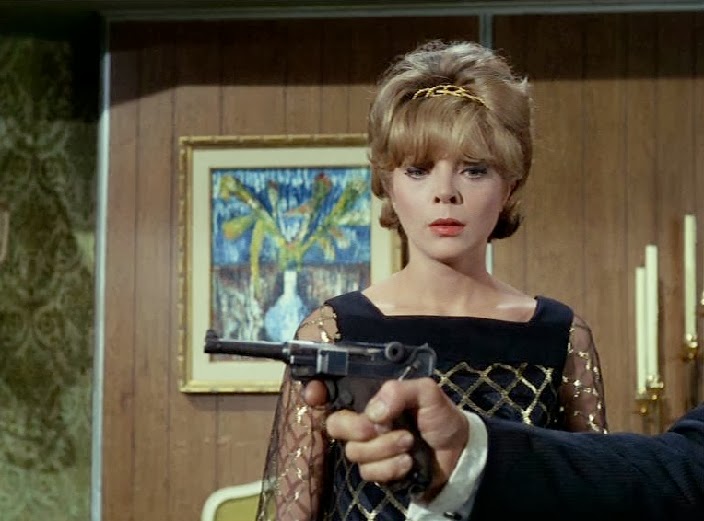 The other surprisingly realistic element is the way Cinnamon Carter is used. Real female spies are very rarely kickass action heroines. They are much more likely to be used as bait for one of the most popular and perennially successful espionage techniques, the honey trap. In other words, using sex to set up enemies who can then be blackmailed or discredited. This is in fact exactly how Cinnamon Carter is used in most episodes. She is in fact by far the most realistic of all the female spies in 1960s television, or in spy TV series or spy movies of any era for that matter.

The difference between a successful series and an unsuccessful one more often than not comes down to having the right balance between the characters, and between the actors. Mission: Impossible (in its early seasons at least) scores highly in this area. The four main agents employed by Dan Briggs provide a very good balance and they had the right actor  to play each role. Briggs himself seems like a convincing spymaster - he’s polished and slick and could just as easily be taken for a middle-ranking bureaucrat, but Hill avoids making him merely dull. He seems like a guy who would be a natural leader, accustomed to taking responsibility and to issuing orders. Greg Morris plays Barney Collier as exactly the kind of tech nerd who would be doing the high-tech gadgetry stuff. Peter Lupus is the muscle, but without being a stereotype heavy. Martin Landau plays Rollin Hand with the mischievous deviousness you’d expect from a successful stage magician.

Barbara Bain has perhaps the most difficult role because she can’t rely on martial arts skills and gunplay. The roles assigned to Cinnamon Carter in a typical mission do not require such skills. What they do require are a cool head, nerves of steel and a great deal of seductiveness. Bain gives her character the air of a woman who possesses these skills and knows how to use them. She’s a bit of an ice blonde, which is what you’d expect. A woman who betrays her emotions will quickly end up dead when playing such dangerous games. It’s also interesting that it is at least implied, albeit very discreetly (as was necessary in a network TV series in 1966), that Cinnamon is prepared to sleep with enemy agents in the line of duty.  We can believe that she would be prepared to go this far, and we can still respect her for it because she’s a professional doing her job. 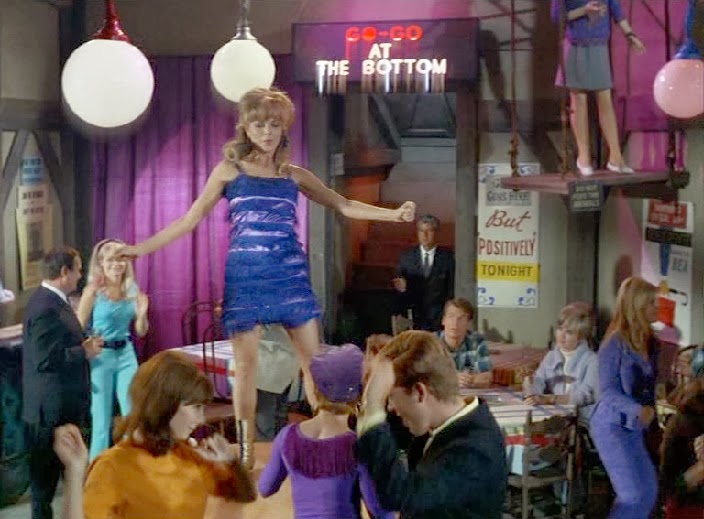 Those involved in making the series clearly felt that too much reliance on straight Cold War themes might try the audience’s patience so the IMF’s missions frequently take it to a variety of Third World countries where they are either trying to overthrow hostile governments or prop up friendly ones. There is, mercifully, no attempt to deal with any serious political issues. This is an action/adventure series, not a political soap-box, and we take it for granted that the IMF represents the good guys and their enemies are the bad guys. If you want cynicism and a questioning of the morality of espionage then you’re watching the wrong series.

As I said earlier the tone remains very consistent. There are one or two minor exceptions. In The Short Tail Spy Cinnamon Carter goes perilously close to becoming emotionally involved with the Russian spy she’s supposed to be setting up for a honey trap, and Bain gets the opportunity to have Cinnamon show some real emotions. Which she does, without overdoing it.

Mission: Impossible has been released on DVD in Region 1, Region 2 and Region 4. The set I have is the Region 2 set, which offers perfectly acceptable transfers at a reasonable price.

Mission: Impossible might be in most respects a very conventional TV spy series but in season 1 at least it’s extremely well-executed and it’s thoroughly enjoyable. Recommended.