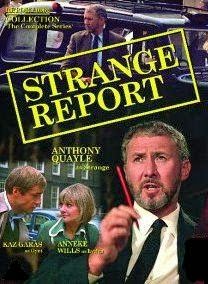 After half a dozen episodes of The Strange Report I’m perhaps not entirely hooked on the show but I’m enjoying it enough to keep going with it. The series first aired in Britain in 1969 and in the US in 1971.

Adam Strange (Anthony Quayle) is a criminologist, retired from Scotland Yard and now pursuing cases that happen to catch his interest him on an unofficial basis. He still has contacts at the Yard, and he has the obligatory two assistants, one male and American, the other young, female and pretty.

To give Adam Strange the necessary touch of eccentricity he drives an (unlicensed) London taxi-cab.

It’s a bit along the lines of Department S in the sense that the plots revolve around crimes that are offbeat or unusual. It’s not as stylish as Department S but it’s still quite entertaining.

ITC always hoped for American sales for this series but for this one they felt they had guaranteed it by making it as a co-production with an American company, Arena. The idea was that the first production run would be filmed in Britain and the second in the US. In fact after the initial production run of sixteen episodes shot in Britain in 1968 and 1969 the series came to a rather unexpected halt when Anthony Quayle lost interest and quit (which was apparently something he was prone to do).

It’s also somewhat unusual among British series of its era in that, in keeping with its Anglo-American origin, it features scripts by both British and American writers. 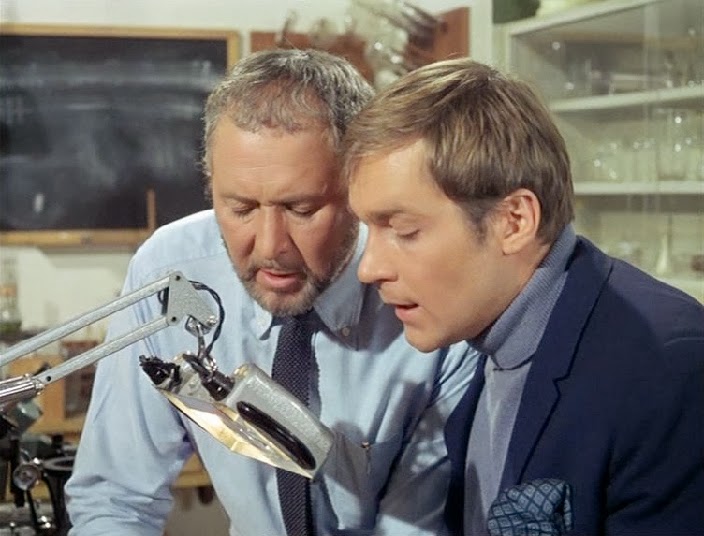 Anthony Quayle’s performance is enjoyable and strikes just the right balance. He plays the role fairly straight but with just a hint of a twinkle in his eye. This is in keeping with the general tone of the series - it’s mostly played straight and avoids the overt camp feel that is so evident in series like The Avengers and Department S, whilst at the same time avoiding the gritty realistic feel that had started to appear in British television in the late 60s with series like Callan and Public Eye.

It’s a tricky balancing act that is not always entirely successful, some episodes coming across as rather serious and even including (alas) some political content whilst other episodes such as Cover Girls are almost too lightweight.

Strange and his assistants rely on scientific methods rather than flights of intuition. It has to be said that the series does manage to come up with some genuinely original ideas in this area. My favourite is the episode where the solution to the crime hinges on the fact that sewing machines, like typewriters, have a distinctive signature. If you have a piece of sewn fabric you can trace the sewing machine on which it was sewn. I have no idea if there’s any truth to this or not but it is a fun idea. 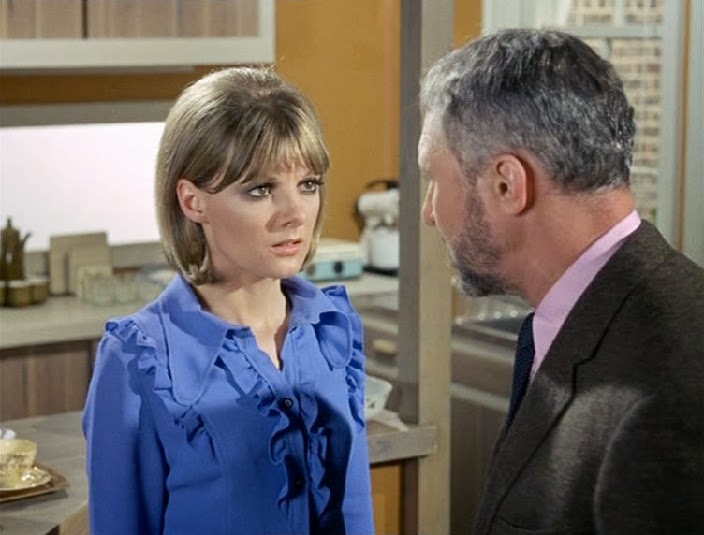 Another episode sees Strange trace a kidnapper through a ransom note written, in time-honoured style, with letters cut from magazines. By identifying the types of magazine from which the letters were cut he deduces the personality of the kidnapper. These are the kinds of nice little original touches that help to give the series a certain distinctive flavour.

Kaz Garas is quite adequate as Strange’s male side-kick Hamlyn Gynt while Anneke Wills brings a delightful Swinging 60s charm and glamour to the role of his female side-kick Evelyn.

As is always the case with British TV of this era you can have fun spotting the wonderful actors who show up in guest roles.

The series was released on DVD in Australia by Umbrella Entertainment a few years back, and more recently in Britain by Network DVD.

The Strange Report has a certain quirkiness, but it’s a nicely subtle quirkiness, and it’s enough to make it worthwhile viewing.
Posted by dfordoom at 19:19