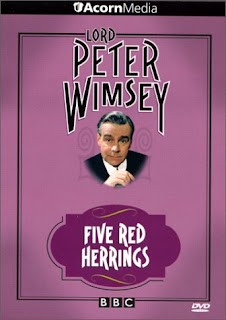 I personally think the BBC adaptations were more enjoyable than Sayers’ novels. Nit-pickers might object that Ian Carmichael was by this time a little too old for the role but he’s so absolutely perfect that it doesn’t matter.

This is in some ways the most outrageous of the five BBC adaptations, with the victim and all the suspects being artists and all of them wildly eccentric.

Lord Peter is in Scotland, looking forward to two weeks of relaxation and fishing. He is of course accompanied by his gentleman’s gentleman Bunter (who also provides a good deal of useful assistance in Lord Peter’s crme-solving activities). Bunter, a keen Sunday painter,  is hoping for an equally relaxing time with his brushes and his easels. Of course it is not to be - wherever Wimsey goes murder is sure to follow.

The Scottish village that Wimsey has chosen for his holiday is something of an artists’ colony. Everybody there seems to be a painter. Even the secretary of the golf club is a painter. And what do you get when you put a group of artists together? You get an extraordinary amount of bitchiness, back-biting, jealousy and murderous rages. The catalyst for much of the trouble is the incredibly bad-tempered argumentative Campbell. Just about everyone has at some time threatened to kill him, and he’s threatened to kill them as well.

When murder finally is committed it does not come as a great surprise. 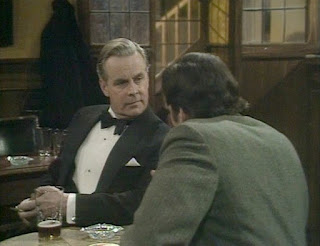 And it is murder, although it has been cunningly contrived to appear to be an accident. Wimsey knows it is murder because the paint on the painting at the murder scene is still wet, which is impossible. Equally impossible is the absence of a certain tube of paint.

It is clear that the murderer has to be one of six local artists. Therefore five of these artists must be red herrings.

As you would expect in an adaptation of a golden age detective novel alibis play an absolutely crucial role. This means a great deal of emphasis on railway and bus time-tables, on the time it would take a man to travel a certain distance no foot, by bicycle or in a car, on the accuracy or otherwise of eyewitness sightings of suspects, and all the other similar stuff that golden age detection fans like myself dote on. In this case it all reaches a climax in the re-enactment of the crime - this very extended sequence (taking up most of the final episode) is an absolute tour-de-force as Lord Peter gradually reveals the intricate manner in which the murder was planned and carried out. Detective novels often end with the detective offering a lengthy description of such events but having it all re-enacted by the indefatigable Lord Peter (and the long-suffering Bunter who must endure of good deal of discomfort in the process) makes it much more fun. Ian Carmichael really throws himself into these sequences and seems to be having enormous fun.

There is however more to this story than elaborate alibis. The lineup of suspects is a delightfully rich gallery of outrageous and extremely entertaining eccentrics. All the suspects have powerful motives and secrets to hide and the motives reveal just what a powder keg an artists’ colony can be! 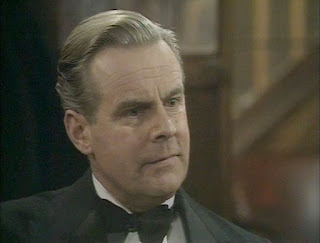 Ian Carmichael is in magnificent form. It was a tricky role - Wimsey’s affectations could easily make him appear to be a bit of an ass but the viewer has to be convinced that he really is a shrewd and determined sleuth. He has to be amusing but also have a certain dignity. He has to be witty and charming but with some emotional depth. We have to both like him and respect him. The affectations can’t be downplayed - they’re an essential ingredient of the character but we have to believe that he is more than just a collection of aristocratic affectations. He has to be able to exclaim “What ho!” and “Jolly good” without seeming ridiculous. Carmichael carries it all off with effortless style.

Glyn Houston is as solid as ever as Bunter. The supporting cast is very strong. The highlight may well be Russell Hunter’s deliciously bizarre performance as Matthew Gowan, although the young Julie Peasgood’s splendidly over-the-top turn as the precocious Fenella Strachan is also memorable.

There’s some lovely location shooting in Scotland as an added bonus.

Acorn Media’s DVD release offers a satisfactory transfer. The only significant extra is an excerpt from an interview with Ian Carmichael.

All five of the 1970s BBC Lord Peter Wimsey series are delightful but this one might be the most enjoyable of them all. Very highly recommended.
Posted by dfordoom at 04:22