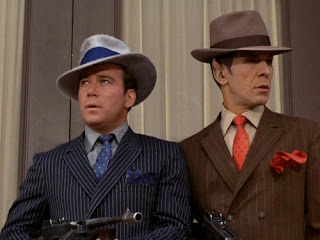 I've just been watching A Piece of the Action, from season two of the original Star Trek (this episode was first broadcast in 1968). It really is great fun seeing William Shatner and Leonard Nimoy doing the hardboiled gangster thing! Star Trek at times veered perilously in the direction of silliness but sometimes the silliness worked remarkably well, as it does in this episode.

Those suits are pretty sharp as well. Not to mention the very sleek 1920s roadster that Kirk drives (very badly).

One of the most successful comedy-themed episodes of the series. I loved this one!
Posted by dfordoom at 08:12