The Adventures of Sir Lancelot (1956) 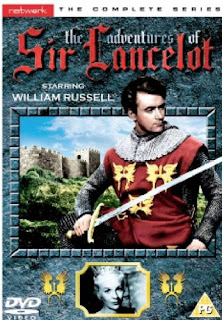 The Adventures of Robin Hood, launched in 1955, having proved to be a huge success for Lew Grade’s fledgeling ITC Entertainment it was hardly surprising that the company followed it up with several more medieval action/adventure series. One of these was The Adventures of Sir Lancelot, which was produced for them by Sapphire Films (a company that enjoyed some success until the heavy-handed politicking of the ill-fated The Four Just Men series sank them).

The Adventures of Sir Lancelot was screened by NBC in the US and was sufficiently popular to prompt the bold decision to make the final fourteen episodes in colour.

William Russell, best remembered as one of the early companions of Doctor Who, played the title role with a considerable amount of both dash and charm.

The first episode, The Knight with the Red Plume, deals with Sir Lancelot’s arrival at Camelot, an arrival that is not welcome by everyone. In fact Lancelot is accused of having slain the brother of one of the Knights of the Round Table. Could Lancelot actually be a villain? It’s a reasonably serious introduction to the series although there are certainly some light-hearted moments as well.

We also meet Merlin for the first time and an interesting character he is. As a magician he’s a total fake. His magic is a mixture of illusionism, applied science and out-and-out trickery. In fact all of the magic in this series falls into these categories - there are no real supernatural elements at all. This is actually an advantage. The trouble with magic is that it’s all too easy to use it as a plot device to get a writer out of a tight corner rather than having the writer use some imagination, and it can also make things too easy for the hero (or for the villains). On the whole the decision to include no genuine magic was the right one. 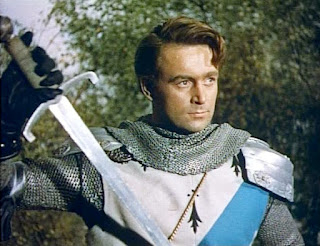 On the other hand while Merlin’s magic might be faked he really is a wise old bird and a shrewd and intelligent adviser to King Arthur - the phony magic is necessary to make people believe in him and listen to his generally very sound advice.

The following episode, The Ferocious Fathers, is much more light-hearted and at times almost farcical. Of course it has to be remembered that this was a kids’ show so one can hardly complain if it’s a bit lightweight. The episode does have some genuinely amusing moments and it gives William Russell the chance to show that he can handle light comedy rather well. This episode also introduces Brian (Robert Scroggins), a kitchen boy who wants to become a knight and who will become Lancelot’s sidekick. The series was of course aimed largely at kids so giving Lancelot a youthful sidekick made sound commercial sense, and luckily he’s not overly annoying.

The Queen’s Knight introduces Sir Mordred, the chief villain of the Arthurian legends, and he’s up to some dastardly villainy here. In The Outcast Lancelot encounters opposition when he announces that he intends to have his new young squire Brian trained as a knight. There are some slightly grating anachronistic class conflicts in this story and it’s a bit too predictable (this predictability is unfortunately a fault with quite a few of the episodes). Winged Victory on the other hand is a fine episode enlivened by Nigel Green’s performance as the treacherous King Mark who captures Lancelot and puts him to the torture to persuade him to reveal King Arthur’s battle plans for the capture of Mark’s castle. 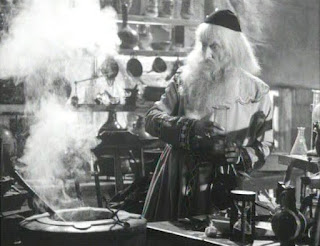 The Lesser Breed was one of the colour episodes and it does look rather splendid. Witches Brew is another colour episode and it’s a good one, having the advantage of a reasonably strong and interesting plot. Plus it features a contest between Merlin and a beautiful but evil sorceress! And hypnotism!

The limited budget means that many episodes are very light on action and even lighter on spectacle and the half-hour format and the need to tailor the series towards kids mean that some of the scripts are pretty lightweight and under-developed. The episode The Bridge features an epic battle for control of a bridge - with half a dozen villagers defending the bridge and four knights as the assault force. Even a dozen more extras would have helped.

It’s always fun to see guest appearances by unknown actors who later went on to stardom, such as Patrick McGoohan as a dastardly knight in The Outcast.

The Adventures of Sir Lancelot offers a pleasing and light-hearted mix of adventure and gentle humour with just an occasional hint of romance.

These medieval adventure series were essentially the British equivalents of American TV westerns, and in particular those TV westerns aimed at younger viewers (such as Annie Oakley). You know that good will triumph and that Sir Lancelot will always act bravely and nobly. There’s always some action but not too much obvious bloodshed. I don’t mind that - I don’t require that a show aimed at younger audiences should be dark and edgy and cynical. I don’t even demand that a show aimed at adult audiences should go overboard on darkness, edginess and cynicism. 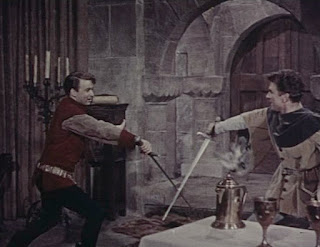 Don’t expect too much historical accuracy. If there really was a King Arthur he lived in the 6th century AD while the arms and armour in this series clearly date from many centuries later. But then most of the stories of Arthur and the Knights of the Round Table are of course much later medieval legends. This series gives us the legendary version, which is what television audiences in the 50s would have expected since that’s what they’d seen in Hollywood movies like Knights of the Round Table.

On the other hand the producers went to a lot of trouble with the sets and costumes and they look splendid given the very limited television budgets. William Russell makes a lively and very personable hero and handles the action scenes with dash and enthusiasm.

Network have released the entire series on DVD. Happily all 30 episodes have survived. The DVD set includes colour transfers of 12 of the 14 episodes made in colour. The picture quality is slightly variable (as you’d expect in a series made 60 years ago) but on the whole the quality is fine and most of the colour episodes look superb.

As long as you remember that it was aimed at younger audiences this series is great fun and highly recommended.
Posted by dfordoom at 22:23