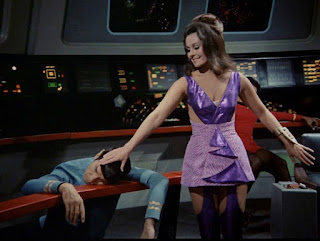 I’ve been slowly (very slowly) making my way through the original Star Trek series on Blu-Ray. I’ve approached the third season with some trepidation. It doesn’t have the best of reputations, and the season opener, Spock’s Brain, is widely regarded as one of the worst, if not the worst, Star Trek episode ever.

It originally went to air in the US in September 1968.

We get straight into the action in this one. A beautiful mysterious humanoid female, who looks human enough, transports herself onto the bridge of the Enterprise. The bridge crew are temporarily disabled. After a short interval the woman disappears. No damage appears to have been done, until Dr McCoy gives Captain Kirk the horrible news. Spock’s brain has been stolen!

The mystery female is obviously the brain thief but no-one on board the Enterprise has the slightest idea who she is, where she came from, where she’s gone, or why she wanted Spock’s brain. Kirk however is undaunted. He is going to get Spock’s brain back!

With surprisingly little trouble they find the planet to which Spock’s brain has been taken, and discover that the inhabitants have found a very good use for it. In fact the people of this planet need Spock’s brain as much as Spock does. Restoring the brain poses some real moral dilemmas which are, disappointingly, simply glossed over. 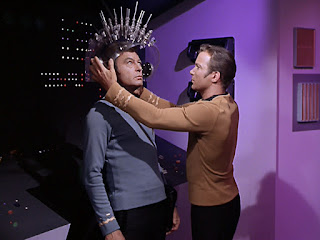 It also has all the weaknesses we associate with this series (although these very weaknesses are what make the series oddly appealing). We have a highly advanced planet with a monoculture and that seems to have a total population of a few dozen people. We have clichés like a helmet that can impart the sum total of technological knowledge to anyone who wears it. We have remote control devices that can be used to inflict pain. We have a civilisation entirely dependent on a kind of super-computer, although the super-computer is an actual brain. We have a civilisation that was immensely advanced but has degenerated to primitive levels. All pretty standard sci-fi tropes used many times in Star Trek and Lee Cronin’s script really doesn’t do anything interesting with any of them.

On the other hand it isn’t boring. The dialogue is excruciating but wonderfully entertaining. William Shatner and DeForest Kelley get lots of opportunities for outrageous over-acting, which they grab with both hands. Spock gets to be incredibly Spock-like. The aliens are pretty young women in short skirts.

Admirers of this episode (and it has quite a few) see it as a kind of homage to 1950s sci-fi B-movies and there is something to that. It doesn’t take itself at all seriously but it doesn’t make the mistake of trying to be too jokey. It has a certain innocence and even exuberance.

The Star Trek episodes that I have problems with tend to be the ones that take themselves too seriously and that try to beat a message into us with a sledge hammer. Spock’s Brain cannot be accused of those faults. It’s very very silly but it’s fun and I found it impossible to dislike it. It’s certainly not a good episode but it’s enjoyable.
Posted by dfordoom at 05:40