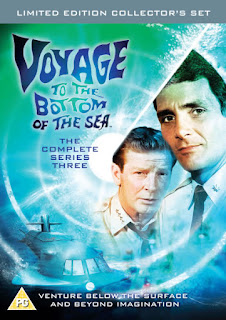 Voyage to the Bottom of the Sea debuted on the American ANC network in September 1964. The first season remains one of the finest moments in the history of American television science fiction (although to be strictly accurate this first season was as much an espionage series as a science fiction series). The network wanted a lighter tone for the second season and thus began the slow tragic decline of a once-great series. The second season is actually still pretty good though. The decline really started to become apparent with the third season in 1966.

Apart from a move towards even more monster-of-the-week stories the third season also suffered from budget cuts, the perennial curse of American TV sci-fi in this period. There just seemed to be no way to convince the American TV networks that sci-fi just cannot be done both cheaply and well.

The third season is by no means a complete washout. The overall trajectory was downhill but there were still very good episodes.

The season opener, Monster from the Inferno, should have been a disaster. It’s pretty much a catalogue of sci-fi clichés. A rock found on the sea floor turns out to be not a rock but an alien brain. Naturally the evil alien brain wants to take over the Seaview and naturally it feeds on nuclear energy. Naturally it sets out to accomplish its aim by taking control firstly of the unfortunate scientist responsible for bringing it aboard, and then Captain Crane. Against the odds it actually works. Director Harry Harris approaches directs this episode with a great deal of gusto. There are some fine underwater miniatures sequences. The special effects work. Most of all it’s fast-paced and exciting and you don’t have time to worry about plot holes.

The Werewolf sounds like it’s going to be a particularly goofy episode, and it is. The Seaview has to prevent a radioactive volcano from destroying the world. Naturally where you have lots of radioactivity you’re going to have werewolves, and so the island on which the volcano is located is home to a werewolf. Things get really worrying when a member of the crew is bitten and turns into a werewolf and worse still Admiral Nelson is bitten as well. Somehow a vaccine must be found in order to save the admiral. Definitely goofy but kind of fun if you’re in the mood. 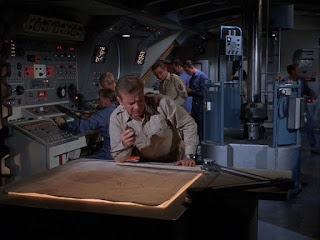 There are lots of very good ideas in The Day the World Ended. An ambitious Senator is aboard the Seaview to inspect Admiral Nelson’s latest invention, the X4, a device that can track every nuclear submarine in the world. Strange things then start happening. Kowalski shoots a fellow crewman, thinking he’s a monster. The Seaview loses all contact with the outside world. The X4 tells them that every nuclear submarine in existence has suddenly disappeared. Nelson sets off for Washington in the Flying Sub, to find the city completely deserted. There doesn’t seem to be anybody left on the entire planet outside the Seaview.

All excellent ideas, and the good news is that the execution is perfect. William Welch’s script is subtle and clever, Jerry Hopper’s direction is taut, the pacing is good and the atmosphere of confusion and paranoia builds very nicely. Scott Homeier is terrific as the smooth and arrogant Senator. The regular cast members are all in top form. The best news of all is that some real money was spent on this one. There’s effective location shooting and there’s some superb footage of the Flying Sub. Even the monster that Kowalski sees works once you understand what is really going on. A very tense very exciting story. Not just one of the best of season three but one of the best-ever Voyage episodes.

Night of Terror on the other hand is a good example of just how poor the third season could be. Admiral Nelson and two companions are marooned on an island. There’s a strange fog that seems to produce hallucinations. There’s a very lame monster and some silliness about pirate treasure. We know from the start that most of this stuff is just hallucinations so there’s no sense of mystery or unease.

In keeping with the overall tone of the third season there’s a good deal of silliness in The Terrible Toys, with not just an alien spaceship but malevolent clockwork toys. It is at least reasonably well-executed silliness and some of the toys (especially the little guy with the axe) do manage to be at least moderately menacing. 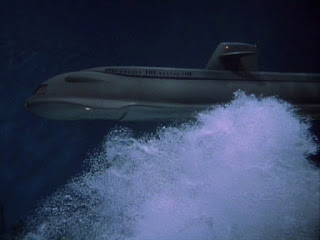 Deadly Waters is a kind of throwback to the first season. There are none of the monsters and general silliness that usually characterise the third season. It’s just a tense and exciting story of survival and it’s a very good one. The Seaview has to rescue a diver trapped on a sunken submarine. The diver turns out to be Kowalski’s brother but the shock of his narrow escape from death has had an unfortunate effect on him. He’s lost his nerve completely. It doesn’t help that due to an extraordinary sequence of bad luck the Seaview itself sinks. Now they’re trapped on the bottom of the sea, they’re below their crush depth so the Seaview is slowly breaking up, and their air is running out. And those are just their initial problems. Things just keep going from bad to worse. In fact every single thing that could go wrong does go wrong.

The script is an endless catalogue of disasters and mishaps but it adds up to a terrifically exciting episode.

Thing from Inner Space is a straight by-the-numbers monster story. A television scientist believes he has discovered a sea-monster and persuades Admiral Nelson to help him to capture a specimen. The monster turns out to be real nasty, but luckily Admiral Nelson is a lot smarter than most sea-monsters. This episode really has very little going for it.

In Deadly Invasion what appeared to be a meteor storm turns out to be something very different. These aren’t meteors, they’re tiny spaceships! Tiny, but very dangerous. This is a full-scale invasion. You might expect the tiny spaceships to contain tiny aliens but they don’t. They do contain aliens, of a sort, and like most television sci-fi aliens they want to get their hands on nuclear energy. Lots of it. This episode is a mix of good ideas and bad ideas and doesn’t quite come off but it’s still kind of fun.

The Death Watch is a controversial episode among fans. It’s a pretty decent idea but there are a lot of plot holes. Admiral Nelson boards the Seaview to find it empty. There’s no-one else on board. The Admiral seems to be behaving a little oddly. You could understand that he might be puzzled and annoyed to find that the entire crew has disappeared but he appears suspicious and paranoid, and his paranoia seems to be centred on Captain Crane. He thinks Crane is going to try to kill him. We soon discover that there is someone else on board - Captain Crane. He seems utterly obsessed with the idea of killing the admiral, because if he doesn’t the admiral will kill him. And there’s a third person aboard, Chief Sharkey, but whose side is he on? 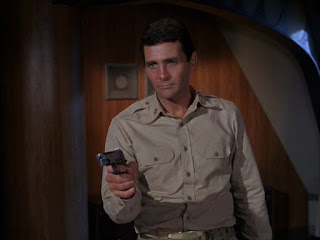 And while Nelson and Crane are hunting each other who is controlling the ship? Someone or something certainly is. And where does the sexy female voice come from, that keeps issuing puzzling warnings?

This script definitely needed a bit more work done on it On the other hand the execution can’t be faulted. Leonard Horn directed and he did a splendid job. He keeps the action and the tension ratcheted up and makes great use of the Seaview as an arena for a fight to the death. Special mention should be made of David Hedison’s effectively chilling performance. Despite its flaws this is an exciting episode and it’s a third season story with no silly monsters!

The Plant Man is exactly the sort of episode that gave the later seasons a bad name. Twin brother scientists create giant walking mutant plants. The evil twin dreams of taking over the world with an army of plant men. It’s a guy-in-a-rubber-suit monster of the week episode with no redeeming qualities whatsoever.

The Lost Bomb by contrast has no monsters, but it has a great deal of suspense and excitement. A bomb powerful enough to destroy half the world ends up on the sea floor after the plane carrying it is shot down. The Seaview has to find the bomb and disarm it but they’re being stalked by a hostile submarine. The bad guys (and they’re nicely villainous bad guys) really seem to be on top in this episode and time is running out for the Seaview and for the world. A terrific episode, almost up to season one standards.

The Haunted Submarine was obviously a budget-saving episode. In fact it’s so cheap they didn’t even need to pay a guest star - they just got Richard Basehart to play a dual role. The Seaview encounters a square-rigged sailing ship which tries to sink them. It’s skippered by a long-dead ancestor of the Admiral who has a bargain, possibly an evil bargain, to offer. This one isn’t just cheap, it looks cheap. It’s not much of a story but with a bit of imagination to provide a suitably eerie atmosphere and a bit of a swashbuckling feel it might have worked. Sadly there’s no imagination at all in evidence and it all falls flat.

So the first half of season three is very mixed indeed. A few excellent episodes, a few more that are silly but fun and a few duds. Disappointing after the first two seasons but the good episodes are very good and they’re enough reason to keep watching.
Posted by dfordoom at 23:29