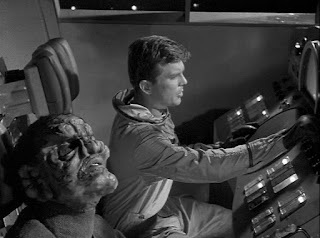 Some more episode reviews from the first season of The Outer Limits.

The Man Who Was Never Born was the sixth episode of season one and went to air in the US in October 1963.

Earth in the year 2148 is not a very pleasant place. In fact mankind is facing extinction due to a plague. The last survivors are mutants.

This was the kind of idea that can be found in countless science fiction stories, movies and TV shows of that era (and would continue cropping up in science fiction for decades afterwards). The best thing about The Man Who Was Never Born is that it doesn’t try to bludgeon us with a message about the dangers of nuclear war. In this case humanity cannot be blamed for the disaster that has overtaken it. It was all the work of one man, a man who developed a horrific microbe. Bertram Cabot Jr was that man.

The astronaut refuses to accept mankind’s death sentence. Surely something can be done? In fact he has an idea as to exactly what might be done. He has after all discovered time travel. Perhaps time travel can save the world. All he has to do is to repeat his earlier voyage and he should get back to Earth in 1963. Then he can warn the people of the 20th century, and change history so as to avoid the catastrophe. To make sure that the people of 1963 will listen to his warnings he takes with him one of the last human survivors, the mutant Andro (Martin Landau). 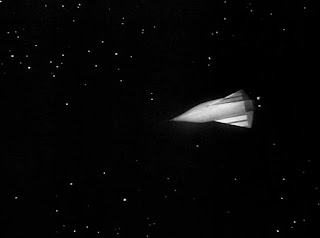 Time travel proves to be more difficult than anticipated. And of course if the only way to prevent disaster is to kill Bertram Cabot Jr before he makes his terrible discovery then time travel paradoxes might be a problem. In fact there are all kinds of other problems as well. Moral dilemmas, and emotional complications.

The premise might not be very original but it’s developed in a manner that is both intelligent and thought-provoking and emotionally complex. It’s a time travel story, a post-apocalyptic story and a love story.

I’ve never been entirely convinced by Martin Landau as an actor. He strikes me as being a bit too theatrical and too mannered but in a story such as this his acting style works quite well. Shirley Knight is also good as the girl who holds the future of the world in her hands. She gives a slightly odd slightly other-worldly performance and it works.

The mutant makeup effects are not too bad. At least they aren’t merely ridiculous. The Outer Limits was a series that depended quite heavily on special effects which was quite a risky strategy for a 1963 television series. Television budgets in those days were not really sufficient for elaborate special effects. The Outer Limits usually overcame this problem by being bold enough to ignore it. They just went ahead and did the stories anyway and relied on the writing and acting being good enough to compensate for occasional wonkiness in the effects department. In this particular episode the effects are quite satisfactory. Even the spaceship looks quite good although it also looks very 1950s sci-fi B-movie. 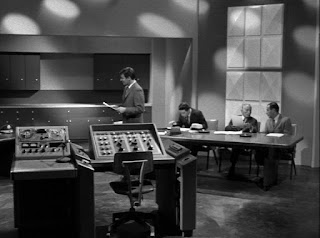 The Man Who Was Never Born is a very fine piece of television science fiction. hIghly recommended.

O.B.I.T. was the episode seven of the first season, airing in the US in November 1963.

A mysterious murder at a secret US defence facility prompts a Senate investigation. Senator Orville (Peter Breck) suspects that the murder had some connection with the unexplained morale problems at the facility. Those morale problems seem in turn to be connected with a machine known as O.B.I.T. (Outer Band Individuated Teletracer).

O.B.I.T. is the ultimate surveillance device. It can observe anyone anywhere. As you might expect this leads to an increasingly paranoid atmosphere at the base. The staff don’t know about O.B.I.T. but they have figured out that every word they say is somehow being monitored.

There’s more to it than this however. The director of the base saw something on the O.B.I.T. screen and promptly had a complete mental breakdown.

This episode has a bit of an X-Files vibe to it. Senator Orville’s investigation is being obstructed every step of the way, but by whom? Is it the Defense Department? Some intelligence agency? Some other US government agency? Or perhaps someone outside the government? 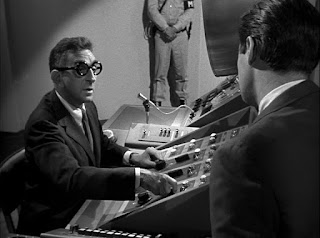 The special effects are of the kind that would presumably be very inexpensive but they’re effective. There are only a couple of sets and overall this is an example of doing science fiction on a minimal budget. But it works. Director Gerd Oswald does a fine job, using close-ups very cleverly and generally concentrating on creating a claustrophobic atmosphere laced with paranoia and voyeurism.

Jeff Corey is terrific as the sinister Dr Byron Lomax who really can’t see any problem at all with the idea of having people watched every minute of the day. Peter Breck is pretty good also as the stubborn Senator Orville.

There’s certainly a message here about the dangers of excessive surveillance leading to a society in which people are afraid to make jokes or laugh or express an opinion but the viewer isn’t likely to feel bludgeoned by the message and thankfully it isn’t made explicitly political.

O.B.I.T. is an intelligent science fiction story extremely well executed. It’s not quite as good as The Man Who Was Never Born but it can still be warmly recommended.
Posted by dfordoom at 03:05