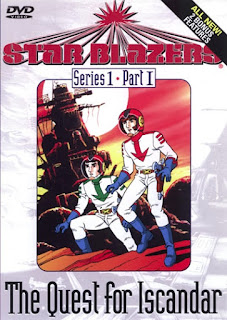 Star Blazers was a 1979 American adaptation of the 1974 Japanese anime television series Space Battleship Yamato. There were three seasons and they were followed by various movies, sequels and remakes. The first season was The Quest for Iscandar.

Apart from being dubbed in English the original Japanese series was edited somewhat, with the violence toned down and sexual references and content that could be construed as anti-American being removed.

Space Battleship Yamato can be regarded as an interesting transitional stage in the history of anime. It was clearly aimed at an older audience than earlier anime TV series like Astroboy and Prince Planet. It has a more grownup tone and it has more of a genuine science fictional feel. Not only are there girls, there is also obvious sexual interest between male and female characters (even in the censored US version).

It was also the first anime series with an overarching story arc to achieve success in western markets.

It has a more sophisticated look than earlier anime series although it’s still a lot less ambitious than the anime that came out later in the wake of the international success of Akira and Neon Genesis Evangelion in the late 80s.

In the year 2199 the Earth is doomed. The war against the invading Gamillon race has not gone well and the planet is pretty much a radioactive wasteland with the population forced to take shelter in underground cities. Within a year even the underground cities will be uninhabitable. 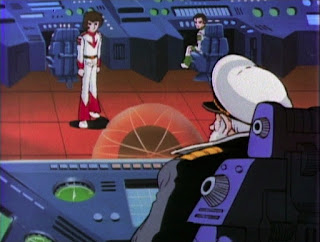 Then the human race is given one last hope of survival when a message is received from a distant planet. This alien race can offer the technology needed to save Earth but first Earth must build a new highly advanced engine in order to cover the incredible distance to the alien world of Iscandar.

For some curious reason the new engine has to be installed in the hulk of the ancient battleship Yamato. The real Yamato was a super-battleship sunk by the Americans in 1945. The story of the historical Yamato is one of the elements that is largely edited out the US version but happily Madman’s Region 4 DVD release includes the cut footage as an extra.

In the US version the Yamato gets renamed the Argo after its conversion to a spaceship. The US networks must really have been hyper-sensitive to any references to World War 2!

The science is delightfully silly with some great technobabble. Of course it’s possible that the science makes slightly more sense in the Japanese version but goofy technobabble is always fun anyway. The scientific goofiness is reminiscent of 1960s Japanese anime kids’ series but it’s combined with some reasonably in-depth characterisation and some good interaction between key characters (the distrust of the hero for the Yamato’s captain being a case in point).

There are of course lots of super-weapons, such as the dreaded wave-motion gun. 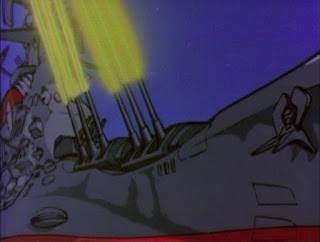 What’s interesting is that the Gamillons don’t really have superior technology. They have some immensely powerful technology but so does the Argo and the two sides are fairly evenly balanced which makes the many battles a lot more interesting.

There's plenty of action as the Yamato comes under attack even before it can be relaunched as a space battleship, and the action just keeps on coming. The Argo has to make the immensely long voyage to Iscandar and return, all within a single year. And the Gamillons will be doing everything they can to stop the Argo.

One amusing aspect is that much of the action is basically World War 2 naval warfare in space, with aircraft carrier battles and even submarine warfare. The echoes of naval warfare are appropriate given that the Argo is in fact a converted World War 2 battleship. The Argo does look pretty cool especially when it’s firing its main guns just like an actual battleship.

There’s not as much emotional complexity as you find in more recent anime but there is at least some attempt to give the characters a little depth. There’s also an interesting relationship between the main hero, Derek Wildstar, and the Argo’s Captain Avatar. Derek thinks the captain may have been at least partly responsible for his brother Alex’s death. Derek is also not entirely sure he’s up to the responsibilities that are suddenly forced upon him.

There’s considerable focus on the psychological strains suffered by the Argo’s crew. Some crew members deal with the pressure well, others not so well.

Even the chief villain, Leader Desslok of Gamillon, is not quite a simplistic villain.

I believe the original Japanese version, with subtitles, is available on DVD. This edited English-dubbed version is still great fun. Recommended.