The Passenger is a British crime/mystery thriller serial written by Francis Durbridge and originally screened in 1971. It was one of the many serials that were broadcast by the BBC under the umbrella title Francis Durbridge Presents.

David Walker (David Knight) is a partner in a toy company about to be taken over by a larger competitor. David is not terribly happy about this but he soon has other much more urgent matters to worry about. He discovers his wife Evelyn (Melissa Stribling) has been having an affair with smooth-talking driving instructor Roy Norton (James Kerry). David decides to spend some time in the country to think things through and while en route to his uncle’s house in Cumberland he picks up hitch-hiker Judy Clayton (Beth Morris). Judy is young and pretty but gives the impression of being perhaps a little flighty. Not that it matters since it all amounts to nothing anyway. David’s car runs out of petrol, he sets off on foot to get some petrol from a garage a couple of miles away and when he returns to the car Judy has gone. A very trivial incident and soon forgotten.

The incident doesn’t seem quite so trivial to Detective Inspector Martin Denson (Peter Barkworth) when he is assigned to investigate the murder of Judy Clayton. Her body was found not far from the point at which David’s car ran out of petrol. She had been strangled. David Walker now seems like an obvious suspect but Inspector Denson soon finds himself with several more suspects who seem every bit as promising. Oddly enough they all seem to be connected with each other. 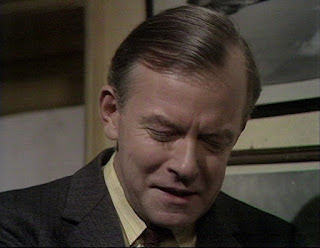 There are several women mixed up in the case as well and they’re all part of the same interconnected web. Even Inspector Denson’s estranged wife Sue (Joanna Dunham) seems to be linked to this strange assortment of people.

One thing that seems clear to Inspector Denson is that most if not all of these people are lying to him. Unfortunately that’s the only thing that is clear. They could be lying because they were involved in Judy Clayton’s murder but they seem to have other equally plausible reasons for being less than frank with the police.

The physical evidence is just as puzzling. There’s a note that is important but the authorship of this missive is uncertain. There’s a camera and some photos but they don’t help much as there is no way of knowing who was in possession of the camera at the time the snapshots were taken.

The more Denson investigates the more evidence he finds and it all points in one direction, but he has a strong feeling it’s the wrong direction. Meanwhile the web of unlikely people who were all involved in each other’s lives just keeps getting more complex and more difficult to make sense of. 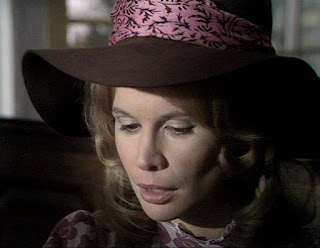 This is a BBC production and it has that characteristic BBC made-on-the-cheap look to it.

Peter Barkworth was a fine actor and gives a nicely understated performance as a man who likes to keep his feelings to himself but finds it increasingly difficult to keep those feelings under control. Joanna Dunham is quite adequate as Sue Denson. Some of the supporting players are very good but some are not quite so good and are just a little stiff. This is pretty unusual for British television of that era which always seemed to have a limitless pool of acting talent on which to draw.

Michael Ferguson is perhaps not the world’s most inspired director. It does have to be remembered that 1971 was still the era of British television shot on videotape in the studio with very limited location work and with the BBC not being known for being over-generous with budgets he was working under definite constraints. And he handles the action climax quite competently (it’s quite possible that most of the budget was actually spent on this climax).

What this serial does have that really matters is a script by Francis Durbridge and that’s more than enough to compensate for a few minor weaknesses in other areas. This time Durbridge has come up with a gloriously elaborate plot that throws so many clues at us that we remain as mystified as poor Inspector Denson. 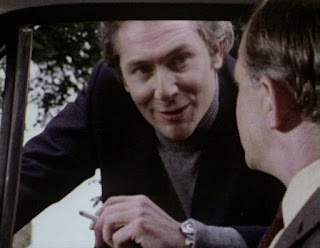 I think it’s fair to say that Durbridge plays fair with us. There’s one clue that is the absolute clincher but with so many clues to keep track of Durbridge could feel fairly confident that its significance would not be noticed.

The Passenger is included in the excellent Region 4 Francis Durbridge Presents Volume 2 DVD boxed set released in Australia by Madman. The set contains no less than five complete Francis Durbridge serials, including Bat Out of Hell and The Doll (which are both definitely worth watching). The only extra is an episode of the (extremely good) Paul Temple TV series. The transfers are very good and the set represents outstanding value.

The Passenger is a delightfully convoluted murder mystery. Very entertaining and highly recommended.
Posted by dfordoom at 23:01