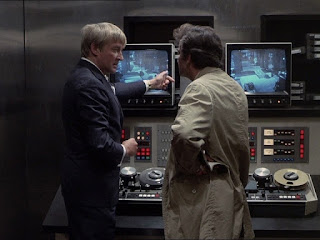 This is a follow-on from my earlier post dealing with the first part of the fourth season of Columbo.

Playback, written by David P. Lewis and Booker Bradshaw,  is notable for being an early disappearance of what would become a popular trope in both mysteries and spy thrillers - the use of videotape to create a false alibi. There’s also lots of fun mid-70s high-tech stuff. The perpetrator is a genius inventor and he’s used the family mansion as a kind of showcase for his security and surveillance gadgetry.

Oskar Werner makes a fun villain, a basically nice enough guy who has been pushed around by his family. Now he’s to be eased out of his position as head of the family’s electronics company and he’s had enough. Murder seems to be the only solution to his problems.

He’s a convincing and gently amusing tech geek type who loves his gadgets more than he loves anything else.

The vital clue in this case is very ingenious.

Watched today this episode loses a little of its impact since the central idea has been used in other movies and TV shows but it’s still pretty solid. 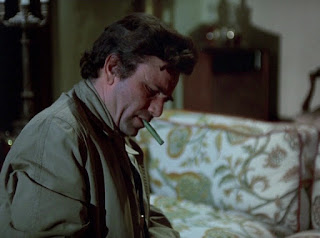 A Deadly State of Mind, written by Peter S. Fischer, deals with one of my favourite subjects - evil psychiatrists. In this case the psychiatrist is Dr Mark Collier (George Hamilton) and he’s having an affair with a female patient, Nadina Donner (Lesley Ann Warren). Naturally she’s married and her husband Carl finds out. The husband threatens to ruin Dr Collier and it’s no idle threat - Carl Donner not only knows about the affair (and of course having sex with a patient is highly unethical) he also knows about Dr Collier’s treatment methods (which are even more unethical). Not altogether surprisingly Carl Donner ends up dead.

Speaking of unethical, Columbo sails a bit close to the wind in his final confrontation with the suspect. It’s just as well that suspects on television shows are usually too cocky to have a lawyer present when being questioned by the police.

In this episode the usual battle of wills between Columbo and his chief suspect is a little different, being conducted somewhat indirectly.

One odd thing is that this is one of the very few episodes in which we don’t see Columbo’s Peugeot 403, even though the fact that he drives a Peugeot turns out to be important.

A Deadly State of Mind is another good episode.

So overall the fourth season of Columbo is pretty satisfying. Definitely recommended.
Posted by dfordoom at 23:49