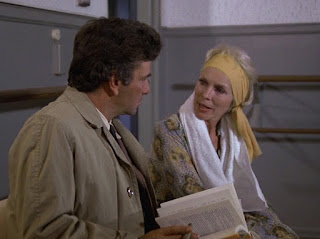 Forgotten Lady kicks off season five and it does so in a slightly surprising way. Normally there is no need to worry about spoilers when discussing Columbo since the killer’s identity is always known right from the start. Forgotten Lady is one of the rare exceptions - there is a vital aspect to the case that is only revealed gradually and there is a crucial late twist and to reveal these things really would lessen their impact and spoil the episode.

What’s important is that these are things that Columbo is not initially aware of and it’s important that the viewer, like Columbo, should not learn them too early.

This is also a rare Columbo episode with a surprise ending, and it is very surprising - it’s not at all what we expect from Lieutenant Columbo. It could have been gimmicky but it works due to the great performances by Peter Falk and by the two guest stars, Janet Leigh and John Payne.

Janet Leigh is Grace Wheeler, a forgotten star from the great era of Hollywood musicals. She intends to make a comeback and has persuaded her old co-star, Ned Diamond (John Payne), to help her. But first she will need to get rid of her husband.

A major bonus for classic movie fans is that Grace Wheeler spends much of her time watching her old movies which means we get to see Janet Leigh watching footage of herself in classic musical roles. 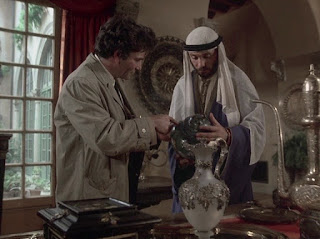 This is an episode that could have been shipwrecked by sentimentality but that peril is avoided, largely by Leigh’s intense and sometimes prickly performance. The last thing Grace Wheeler wants is pity and Leigh manages to give a very moving performance without any self-pity. In fact the character, as played by Leigh, simply does not have the capacity for self-pity. John Payne is every bit as good.

Judging by the first two episodes there does seem to have been an attempt to do something just a little different in season five. Forgotten Lady had unexpected plot twists while A Case of Immunity has an unusual setting. The murder takes place within the legation of the Kingdom of Suari. Which of course means that technically the murder did not take place on U.S. soil. A further complication is that Columbo knows from the start that the murderer must have been a member of the legation and would therefore have diplomatic immunity. Columbo will have to tread very very carefully.

It’s not that Hassan Salah (Hector Elizondo) is necessarily any cleverer than the average murderer. His plan is ingenious but flawed. He is however very much aware that he has diplomatic immunity so he is very confident indeed that even the annoyingly persistent Lieutenant Columbo poses no threat to him.

It really looks like this case might be a failure for Columbo, that he may solve the puzzle but be unable to make an arrest.
Posted by dfordoom at 23:23