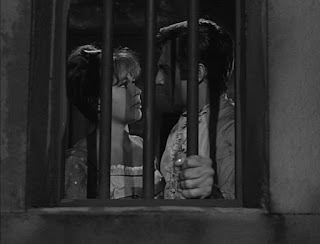 Some more episodes from the second season of the excellent American horror anthology series Thriller, hosted by the one and only Boris Karloff, which was screened on NBC in 1961-62.

Guillotine
Guillotine is an early second season episode which was originally screened in September 1961. The credits include some interesting names. Charles Beaumont, who wrote some of the best-remembered episodes of The Twilight Zone, wrote the script. It was based on a story by Cornell Woolrich, a writer whose delightfully twisted work has formed the basis for countless movies and TV plays in the thriller, horror and film noir genres. The director was Ida Lupino. A major Hollywood star in the 40s she went on to have an extremely busy career as a director, mainly in television, while continuing to do fine work as an actress.

Guillotine is set in France in 1875 and concerns convicted murderer Robert Lamont (Alejandro Rey). He has been condemned to death but he thinks he has found a way to avoid his appointment with Madame la Guillotine.

There is a kind of unwritten law that if the public executioner dies shortly before an execution is scheduled then the next man in line for the guillotine will be pardoned. All Robert Lamont has to do is to make sure that the executioner, Monsieur de Paris (Robert Middleton), dies at the correct time. Robert ids languishing in prison and obviously cannot kill him, but perhaps Robert’s wife Babette (Danielle de Metz) could do something about the problem.

We do naturally feel some sympathy for Robert. He’s not a thug or a cut-throat. He committed murder but it was a crime of passion. He may well be right in believing that he was very unlucky that the court did not see it that way. And we always tend to feel sympathy for the underdog or for someone in imminent danger. 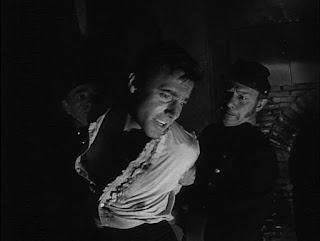 On the other hand we feel some sympathy for Monsieur de Paris as well. He’s actually quite a pleasant and decent fellow. He has a passion for gardening and he is, in his private life, a kind man. But if he lives then Robert dies, and in order for Robert to live Monsieur de Paris must die. We can’t help feeling a bit torn. We’d really like both of them to live. We also feel some sympathy for Babette who is trying to save her husband’s life but she is planning to commit murder. This story rather neatly sets up all kinds of mixed emotions in the viewer, about all the characters.

Given that it’s based on a Cornell Woolrich story we expect that the sting in the tail will be a nasty one, and it is.

Lupino builds the suspense pretty well. We feel Robert’s agony - he believes he may be saved but he cannot be sure and the time of his execution draws steadily nearer and he still does not know.

There are solid performances from the three leads with Robert Middleton being especially good as the jovial headsman. A good well-crafted episode. 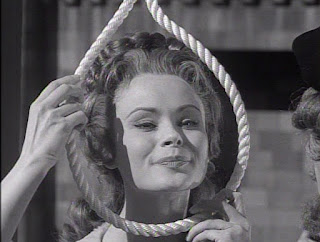 Sheila Devore (Patricia Barry) is a big Hollywood star. Or at least she a big Hollywood star but that was quite a few years ago. Now she’s forgotten, but sh’s planning to relaunch her career. She even has a script picked out for her comeback. She selected the script with Herbert’s help. Herbert Bleake is her devoted admirer, companion, indeed her slave. All he now has to do is to give Empire Studios chief Max Quink (Herbert Rudley) the good news.

Max doesn’t think it’s good news at all. Sheila Devore is a has-been and he has no intention of putting into a new film. Unfortunately Max doesn’t have a choice. You see Herbert is a book-keeper at the studio and he knows some interesting thongs about certain financial arrangements that are perhaps not entirely legal. So Max is going to have to give Sheila her comeback movie.

Sheila has selected The Legend of Meg Peyton to resurrect her career. It’s the story of a beautiful woman executed for murder and witchcraft. In order to inspire her performance Sheila intends to wear the actual wig worn by Meg Peyton. There’s a curious story about this wig and if Sheila had heard the story she might have had second thoughts about wearing it. 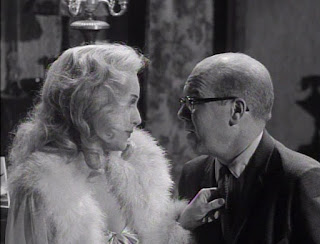 Patricia Barry relished the opportunity do some outrageous overacting, and really there is no other way she could have approached this rôle.

If there’s a weakness to this story it’s the fact that Meg Peyton gets sidelined a bit. We assume that she possesses any woman who wears the wig but we don’t really get much of an insight into her motivations. We know she was a witch and that she was also accused of being a multiple murderess but that’s all we ever learn. Seeing the change that comes over Sheila when she puts the wig on does give us some clues but it’s not quite clear how much of her personality is her own and how much is Meg’s. Sometimes it’s an advantage not to over-explain things but in this case I’d have liked to know just a bit more about Meg.

Director John Brahm had enjoyed success as a feature film director in the 40s with horror and other dark themes being a bit of a speciality of his. Although he was inclined to take his time he made quite a successful career in television.

There’s nothing particularly original or startling about A Wig for Miss Devore but it is superbly executed and it works. 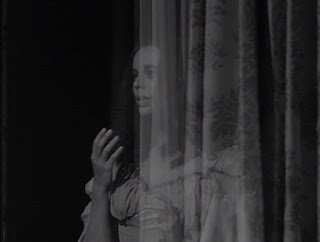 Notorious witch Elspeth Clewer is burnt at the stake, taunting her executioners. She had been condemned as both a witch and a vampire. We then move forward to the present day and find that Lady Margaret Clewer is being disturbed by nocturnal visitations. She sees a face at the window, but it is her own face.

Dr Edward Stone (Ronald Howard) is the village physician and he’s more than a little disturbed by the case. Lady Margaret’s symptoms are puzzling. Her moods are subject to wild swings. And then there was the blood on her face. Equally disturbing are the doctor’s feelings for Lady Margaret.

It’s obvious that Elspeth, dead three hundred years, has some kind of hold over Lady Margaret. It might be simply a psychological fixation in Lady Margaret’s mind. In fact as far as Dr Stone is concerned it must be that. He is a man of science. He turns to an eminent psychiatrist for help. Perhaps he should have listened more to the vicar.

This is another example of Thriller taking a fairly clichéd idea but doing it so well that the lack of originality is not a problem. A good episode.
Posted by dfordoom at 18:05