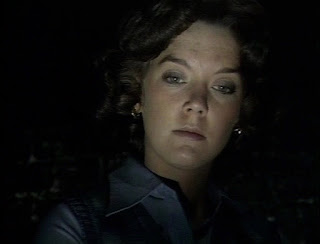 Won't Write Home Mom, I'm Dead was the third episode of season five of ITC’s extremely successful psychological horror anthology series Thriller. Dennis Spooner wrote the script from a Brian Clemens story. In the US it was given the very dull title Terror from Within.

The story takes place in a village in the English countryside that has been taken over by hippies, mostly American hippies. The hippies are all wealthy, living on generous allowances from their families. Being rich they despise materialism. They have turned their backs on the empty values of their parents, and have broken off all contact with their families (except of course for collecting their monthly allowances).

Abby Stevens (Pamela Franklin) isn’t like that. She’s a rich kid but she’s old-fashioned and family-oriented and has the quaint idea that if your parents are supporting you financially then perhaps you owe them some debt of gratitude. She has arrived for a brief visit to look up her half-cousin Alan Smerdon (Oliver Tobias). There are some amusing exchanges between the two half-cousins. It’s clear that Spooner and Clemens regard these hippies with derision and dislike and who can blame them?

Maybe it’s a personal flaw in my makeup but I immediately found myself looking forward to the prospect of seeing these hippies meet some kind of very unpleasant (and hopefully painful) fate.

Abby’s real purpose in arriving at the commune is to find her boyfriend Doug. He set out for Britain two months earlier and hasn’t been heard from since but Abby knows he came to the hippie village because she and Doug have a psychic link. Oddly enough the hippies vehemently deny having ever seen Doug. 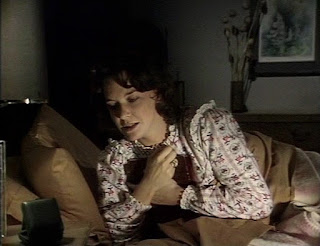 The most overtly disturbing of the hippies is Frank (Ian Bannen). He isn’t American and he isn’t rich and he has a violent temper. He scares Abby right from the start.

There are other things disturbing Abby. The psychic messages from Doug were very confusing. She’s also worried about the red Rolls-Royce. The hippies all assure her there is no red Rolls-Royce, but she’s sure it exists and she’s seen it. There’s also the problem of the elm trees. There are five elms but there should be six.

Pamela Franklin appeared in a couple of episodes of Thriller. This was during her scream queen phase in the 70s. She’s largely forgotten now (she retired from acting in the early 80s) which is perhaps a little unfair. She was not a bad actress and she does a fine job here. Ian Bannen is pretty good as well. He overacts but I think he’s justified in doing so. Oliver Tobias is certainly convincing as the kind of guy who might well be running some weird hippie cult.

This is an odd episode. Thriller did occasionally venture into the field of supernatural horror but usually in a tentative manner, with the supernatural elements sometimes turning out not to be supernatural after all. This is an episode in which the viewer definitely cannot be sure whether or not there’s going to be anything genuinely supernatural. I quite like that kind of ambiguity.

The best thing about this story is the atmosphere. The village is creepy and the hippies are creepy. They might pretend to be into peace and love but the overwhelming feeling that Abby gets (and I think most viewers will agree with her) is that this is a bad scary place in which evil things might well have happened, and the hippies might well have been the ones perpetrating the evil.

Won't Write Home Mom, I'm Dead is better than its reputation would suggest. It’s not a complete success and it’s not one of the great Thriller episodes but it has its moments of creepy weirdness and it’s worth a look. 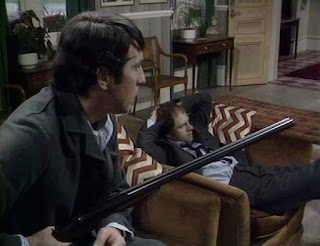 The Crazy Kill is another Thriller episode written by Dennis Spooner from a Brian Clemens story. In the US it was given the dismal title Fear Is Spreading.

It’s a setup that has been used countless times. Two criminals have escaped from prison and now they’re holed up in a very comfortable country house and they’re terrorising the owners, heart surgeon Dr Henson (Denholm Elliott) and his wife. The criminals are hoping to evade detection while a huge police manhunt is underway.

The convicts are Garard (Anthony Valentine) and Filton (John Moreno). Filton is nasty but he’s small time and a coward and not overly dangerous. Garard is a very different matter. He’s a psychopath and a killer. He’s also intelligent and charming. He’s about as dangerous as they come. Oh and by the way, he also has a shotgun.

Superintendent Brook (Alan Browning) knows just how dangerous the situation is. The chances of recapturing Garard peacefully are zero. It’s going to be a tense cat-and-mouse game between the police and the convicts and an even more tense time for the unfortunate doctor and his wife whose chances of coming out of this alive are not all that promising.

So as I said it’s a story that has been done many many times, except that that is not the real story. The real story is a quite different one and we’ve had a few tantalising hints early on as to what it might be. The viewer is not the only one who is going to be surprised by the way the ending plays out. 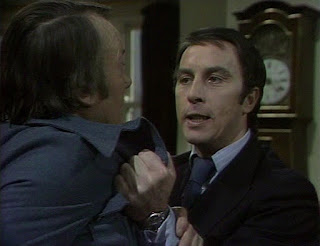 Garard is the kind of rôle that Anthony Valentine did supremely well. In fact I don’t think anyone has ever played such rôles with quite the same effortless and chilling menace. Denholm Elliott is almost as good as the very nervous surgeon. They’re the stars and they have the meaty parts and they give it their all. The game played out between them is a joy to behold.

The supporting players are solid. Alan Browning adds a bit of depth to Superintendent Brook, a man under enormous pressure. He knows that if that if he makes a mistake with a man like Garard then people will die.

The studio-bound feel doesn’t matter in this one. Only a few sets are needed. The writing and the acting are the only things that count in this episode and they’re both top-notch.

The Crazy Kill is a great Thriller episode.

I reviewed the first two episodes in this season in an earlier post.

After seeing the first four episodes I have to say that season five is turning out to be very very impressive.
Posted by dfordoom at 23:43