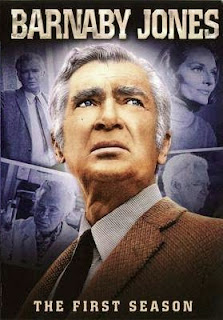 Barnaby Jones started life as a spin-off from the very successful Cannon private eye TV series. Barnaby Jones would go on to be a massive hit, running for no less than eight seasons.

Buddy Ebsen was already a household name thanks to The Beverly Hillbillies which ended its long run in 1971. By that time Ebsen was well into his sixties but his career was far from over. Barnaby’s daughter-in-law Betty acts as his secretary and confidant. She’s played, and played pretty well, by Lee Meriwether.

The first episode of Barnaby Jones, Requiem for a Son, seems at first like it’s an episode of Cannon. Frank Cannon is preparing one of his gourmet meals when he gets a phone call from a friend who is also in the private detective business, a guy by the name of Hal Jones. Jones is in trouble and wants to talk to Cannon, Cannon tells him to come to his apartment, Jones doesn’t show up. The next morning Cannon finds out his friend has been murdered. He gets the news from Hal’s father, Barnaby. Now we find out about Barnaby Jones. He’s a private eye as well, but retired. His son had taken over the business. Now Barnaby is out of retirement and he intends to track down his son’s murderer, with some help from Cannon.

Barnaby is no spring chicken but he’s tough physically and mentally. He’s tough, but it’s his own distinctive brand of toughness. He doesn’t touch alcohol but he does enjoy a cold glass of milk. He also has a degree in forensic science and has his own little forensics laboratory - very convenient when you want some answers about a clue but you don’t want  the answers to come from the police.

Barnaby Jones slots into what you could call the gimmick detective category which enjoyed quite a vogue in the late 60s and early 70s. There was Ironside, the wheelchair-bound detective. There was Longstreet, the blind detective. There was Cannon, the fat detective. And then came Barnaby Jones, the old detective. Unfortunately apart from that gimmick Barnaby Jones is very much a routine private eye series, with some rather pedestrian scripts. On the plus side, like all Quinn Martin’s shows, it boasts high production values and it’s very polished and very well-made. Buddy Ebsen is excellent. What I particularly like about his performance is that he doesn’t try too hard to make Jones a loveable old codger but he also doesn’t try too hard to make him a crusty old curmudgeon. Jones comes across as a fairly likeable guy but one who doesn’t suffer fools gladly.

Lee Meriwether doesn’t get a whole lot to do. She is pretty good though and she and Buddy Ebsen make a good team. 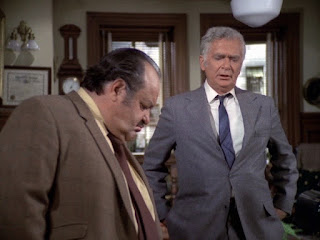 The Episode Guide
To Catch a Dead Man is a very very Columbo-like episode. It not only follows the Columbo formula, it has very much the Columbo feel as well. It opens with a rich man, Philip Carlyle, committing a murder that is clearly intended to cover his own disappearance. He then changes his appearance and pops up in the sleepy little town of Lake Tomac California under the name Fred A. Williams. Barnaby is employed by the murdered man’s girlfriend and he follows the trail to Lake Tomac where we are treated to a Columbo-like battle of wits between Barnaby and the killer, with Barnaby doing the exaggerated folksy schtick to persuade the killer to underestimate him. The killer is played by William Shatner and he’s a typical Columbo murderer - rich, clever, ruthless and arrogant but with an over-confidence that might well bring him undone. There’s nothing wrong with the story, in fact it’s quite hood, it’s just uncannily Columbo-like.

In Sunday: Doomsday someone is threatening to kill Barnaby. Of course we know it’s some crazy guy who’s just out of prison and who blames Barnaby for sending him there. Of course Barnaby also knows that it has to be some ex-con wanting revenge. So this is an episode that is not exactly scoring any points for originality. It’s executed well enough and there’s a clever touch at the end but otherwise it’s pretty routine.

The Murdering Class takes Jones to an exclusive boys’ school where the headmistress’s brother has met a violent death which has been made to look like an accident. The title is interesting since apart from it obvious meaning it seems to have some definite class overtones, with evil WASPs being the murdering class. An interesting episode.

In Perchance to Kill Barnaby is hired to find a teenaged runaway. The girl and her boyfriend are suspects in a murder but Barnaby doesn’t find the evidence to be overly persuasive, even if they are hippies. Barnaby is more interested in the victim’s business partner, and he’s especially interested in a white suit. A routine story but it’s OK. 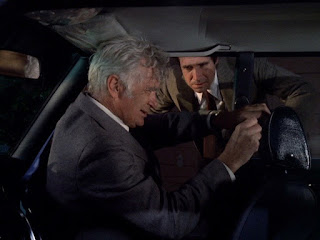 Barnaby Jones has been in the game a long time but in The Loose Connection he suffers the embarrassment of being set up as a drug courier. The most interesting thing about this story is that we see that Barnaby is fallible. He makes not jut one but two big mistakes. A reasonably solid episode.

Writer Harry Doyle disappears in Murder in the Doll's House and Barnaby’s job is to find him, but we know from the first scene of the episode that Harry isn’t going to be found. This one features a strong guest cast including Jack Cassidy (always fun when he turned up as a sinister crazy in detective series) and Anne Francis. Harry had been spending some time in his home town and Barnaby starts to think that the answer to his disappearance may lie in the past, in a tragic accident six years earlier. It’s another solid enjoyable episode.

In Sing a Song of Murder a pop singer meets an untimely end and his business managers decide this could be an opportunity for them rather than a disaster. They have a plan. It’s a crazy plan but if it works it means lots of money. Meanwhile Barnaby has been hired to find the girl who was with the pop star on his unlucky last night on earth. Barnaby solves this case with forensic science which gives it bonus points. A pretty good episode.

See Some Evil... Do Some Evil starts of course with a murder. As usual we know the identity of the killer right from the start and we know the killer’s major secret as well. What we don’t know is why Stan Lambert he would want to kill Henry Warren. In fact we have no idea why anyone would have wanted to kill him. Barnaby picks up a couple of neat (and subtle) little clues in this story. And the trap he lays for the killer is quite clever. A very entertaining episode. It also has Roddy McDowall being sinister which earns it bonus points. 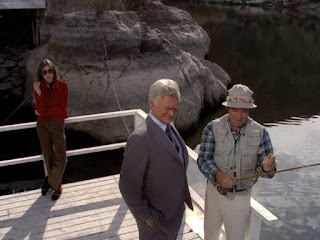 Murder-Go-Round presents Barnaby with a case that doesn’t sound too promising. A man visiting the little town of Parker Junction is killed by a hit-run driver. His wife gets it into her head that there was more to it. And it turns out there’s a whole lot more to it. Buddy Ebsen is the best thing about Barnaby Jones and he’s in particularly good form in this one, giving an amused and almost playful performance. A good episode.

To Denise, with Love and Murder is about a man who marries an older woman for her money. It works out for him as you might expect it to do. He starts an affair with a younger woman, she wants him to marry her, his wife finds out and it all gets very complicated and unpleasant. And ends in murder. It seems straightforward but everyone, including Barnaby,  jumps to the wrong conclusion. It’s not dazzlingly original but it’s well executed.

In A Little Glory, a Little Death a has-been Hollywood star has become involved in something very shady and he’s been very indiscreet about it and now he has a witness to deal with, a very inconvenient witness. Barnaby is hired by a young actress whose mother, also an actress, has disappeared having been last seen at a party at the home of that faded Hollywood star. The main twist is a rather hackneyed plot device that rarely works convincingly. A very pedestrian episode.

Twenty Million Alibis is obviously a story that hinges on an alibi. A reformed jewel thief turned author can’t possibly have committed a daring robbery because at the time he was on national television, and although six minutes are unaccounted for he couldn’t possibly have carried out the robbery, but he did. It’s up to Barnaby to break the unbreakable alibi. A fairly enjoyable story. 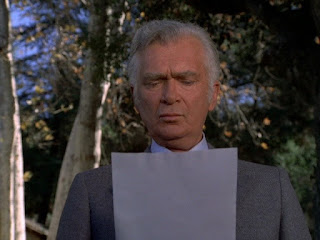 Final Thoughts
I mentioned Columbo earlier. This series does mostly follow the Columbo inverted detective story structure. We see the murder at the beginning and we know the murderer’s entity. The interest comes from seeing how Barnaby will arrive at the correct solution.

Columbo did it better of course. The scripts for Barnaby Jones are just not as strong or as consistent.

Barnaby Jones was however a huge hit, running for no less than eight seasons, so obviously audiences liked it more than I did. That’s not to say I disliked it. Not at all. It’s rather lightweight and it’s not exactly ground-breaking but it’s decent harmless entertainment.

Barnaby Jones is available on DVD pretty much everywhere. The first season of course was only thirteen episodes.