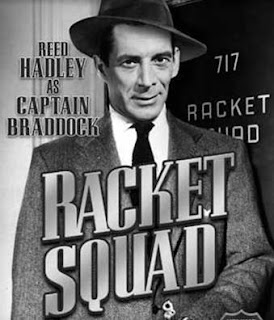 Racket Squad was an American cop series dealing with various cons and the way the police handle such crimes. It ran for 98 episodes from 1951 to 1953.

Reed Hadley played Captain John Braddock of the Racket Squad and also introduced and narrated each episode. At the end we’d be treated to a lecture on the dangers of con-men. The narration gives the series an awkward feel. Presumably it was intended to give a semi-documentary feel.

It was made on the cheap, there are very few sets and the acting is not always top of the line.

The most interesting thing about it is the detailed explanations of the workings of the various cons and that’s a good reason to watch the show if you’re interested in such subjects (I find them to be quite fascinating).

Racket Squad is in the public domain and had had some spotty poor-quality DVD releases of a limited number of episodes. Eight episodes are included in the Mill Creek TV Detectives 150 episode set and they’re the only episodes I’ve seen although others are available on DVD.

Heaven for Sale deals with phoney spiritualists. The spook racket was still a big deal in the early 50s. In this case an old man is conned out of a diamond bracelet by a fake medium who claims to have contacted his deceased daughter. This is a fairly clunky episode made worse by intrusive and irritating voiceover that tells us things we can plainly see. Not a good episode at all. 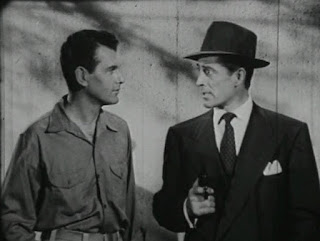 The Case of the Hearse Chaser is better. This time the racket is checking the obituaries and then persuading the families of the deceased to pay money for goods supposedly ordered by the deceased. In this case it’s a portrait. Not a great episode but not too bad.

In Kite High an undertaker is the victim of kiting which is a racket involving cheques. In this case it also involves gambling and a pretty girl, which are pretty useful aids if you want to separate a mark from his money. This is an OK episode but would have been much improved by some more focus on the actual investigation.

The Bill of Sale Racket features a couple of con artists with an ingenious way of buying up gas stations without ever having to pay for them. This story features a rather unlikely shootout ending (con-men aren’t known for indulging in such shenanigans with guns) - I guess it was figured that the series needed to be spiced up with a bit of action.

Desperate Money is about an elderly tailor who becomes a victim of a loan shark. The strength of this series is the ingenious nature of the cons so this by comparison is a very straightforward tale. This makes the stilted quality that characterises the series rather more obvious.

The System is a classic con, relying on the mark’s greed and on the natural human tendency to believe what we want to believe. It’s a gambling system and it’s worked by a very old trick. 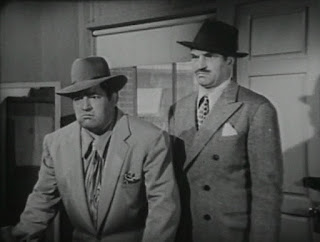 His Brother's Keeper is about a charity scam and it’s one of the better episodes. It has a stronger plot and some genuine dramatic tension.

Take a Little, Leave a Little involves a phoney oil well racket. The con itself is, like all good cons, not very original. But in this case the execution of the con is a work of art. As in several other episodes the plot is a bit sketchy when it comes to the actual police investigation. It’s still a good episode.

Racket Squad is mostly going to appeal to people who already have a taste for 50s cop shows and don’t mind the fact that it looks like it was churned out very quickly and very cheaply. Most 50s cop shows were made like that. Some, like Dragnet, still manage to achieve a certain distinctive style (and I’m actually quite a fan of 1950s American TV crime shows). Racket Squad by comparison just looks cheap.

On the other hand if you’re fascinated by confidence tricksters then this series is like a televisual encyclopaedia on the subject.

Probably not a series you’d bother buying but if you have any of the various public domain DVD sets that includes a few episodes then it has some curiosity value.
Posted by dfordoom at 02:15