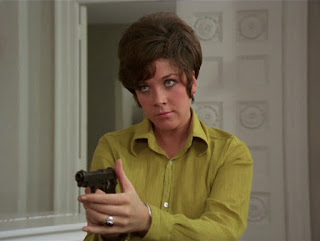 Some thoughts on several miscellaneous Tara King episodes of The Avengers.

Love All
Love All (written by Jeremy Burnham) takes a basic idea, a security leak within the highest levels of Whitehall, that The Avengers had done over and over again but it takes that idea and adds some wonderful twists to it and develops it with an enormous amount of style and wit. The result is one of the best of the Tara King episodes.

This is an episode in which nobody wants to take Tara’s theory about the security leak seriously. She thinks it’s all about love, that love is the only explanation for the particular kinds of odd behaviour that senior civil servants are suddenly displaying. Steed and Mother both scoff at Tara’s theory but it turns out that she was right. But this is not just another story of powerful men being caught in a honey trap by a glamorous lady spy. In this case they’re trapped by the most unglamorous female you could possibly imagine, a frumpy cleaning lady.

How the scheme works is pretty clever. There are lots of other clever ideas as well - the automated romance novels are a lovely touch.

This is one of the Tara episodes that compares very favourably to the best episodes of the Emma Peel era.

My Wildest Dream
My Wildest Dream has everything you want in an Avengers episode. Philip Levene provides a witty clever script about men who commit murders in their dreams only they’re not dreaming. There’s  a superb guest starring performance by Peter Vaughan as an evil psychiatrist, plus there’s the always wonderful Philip Madoc as one of the sleep killers. As a bonus there’s a delightful comic performance by Edward Fox as al elegant young man-about-town who is besotted with Tara. 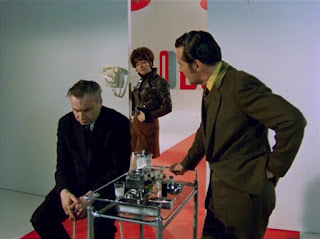 There’s plenty of great visual style with the observation ward set being especially good. There’s plenty of action, with Tara getting an absolute corker of a fight scene (and it’s really quite a brutal and realistic fight). Steed and Tara both get plenty to do in this episode. Robert Fuest’s direction is lively and imaginative.

There are some nice unexpected plot twists. And you have to love the idea of an aggresso-therapist. This is one of the best Tara episodes, and Linda Thorson was really starting to hit her stride and get a handle on her character.

On the whole as very fine episode.

Pandora
In Pandora (scripted by Brian Clemens) Tara visits an antique shop and that’s the last thing she remembers until she wakes up in a strange house. She is wearing an Edwardian dress and her hair is done in Edwardian style. According to the morning paper it is the year 1915 and everybody is calling her Pandora.

Steed is rather concerned as Tara failed to show up for a luncheon engagement and there are some puzzling circumstances to her non-appearance. The key to finding her may be  the Fierce Rabbit. The Fierce Rabbit agrees, but has his own agenda.

This was Linda Thorson’s favourite episode, which is not altogether surprising since she gets to play a woman on the edge of madness. There are some great supporting players. Julian Glover gives a nicely twisted performance while John Laurie (a truly wonderful character actor) has fun as the Fierce Rabbit.

Director Robert Fuest throws in some suitably disconcerting camera angles but he doesn’t go overboard with the hallucinogenic stuff. It’s effectively moody and there’s an atmosphere of unhealthy obsession. The sting in the tail is rather neat as well. This is a pretty good episode. 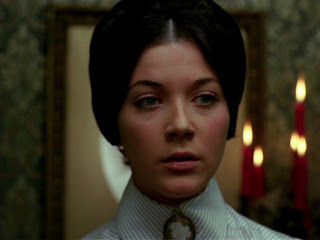 This episode has an interesting history. The departure of Diana Rigg coincided with a change of producer. John Bryce took over but after a handful of episodes had been filmed he was dumped and Brian Clemens and Albert Fennell were hurriedly recalled to duty. The question was what to do with the material that had been shot under Bryce’s supervision. Clemens took parts of one of these unaired episodes, The Great Great Britain Crime, combined them with some new material and some material from earlier Emma Peel episodes and added a framing story and the result was Homicide and Old Lace.

Malcolm Hulke and Terrence Dicks are the credited writers but Brian Clemens added so much new material that he has to take much of the blame for the results.

It opens with Mother’s aunts surprising him on his birthday. They persuade him to tell them a real-life story. So he proceeds to tell them a tall tale of an outrageous crime. John Bryce’s intention as producer had been to return The Avengers to something much closer to the gritty realism of the very first season, and so one assumes that The Great Great Britain Crime was intended to have that gritty realistic feel to it. But as recounted by Mother it’s pure outrageous melodrama and totally fanciful and in fact quite silly.

Patrick Newell’s telling of the story is quite amusing, and the hyper-critical running commentary on the tale by the aunts has its funny moments. It does have one major thing going for it - Gerald Harper’s delightful performance as the dedicated but bungling security chief Colonel Corf.

On the whole though it ends up being a bit of a mess, although it is mildly amusing and not quite as awful as its appalling reputation might lead you to expect.

The Rotters
Written by Dave Freeman The Rotters starts with the murder of a government forestries expert and we then get one of the more bizarre scenes involving Mother. It became one of the major recurring jokes of this era of The Avengers that whenever Mother had to brief Steed and Tara it would always be in an outlandish setting. Sometimes these interludes were quite inspired. Sometimes (as in this case) they were just seriously weird, but they were usually at least mildly amusing. 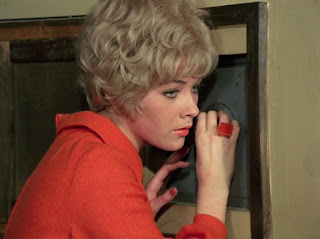 Which brings us to the subject of Mother. In the earlier seasons we never saw Steed’s bosses. It was always implied that only Steed had contact with his superiors, and that his partners (David Keel, Venus Smith, Mrs Gale and Mrs Peel) were agents that Steed had recruited on his own initiative and that he was allowed to run them as he saw fit. That changed in the Tara King era. Steed and Tara were both clearly professional secret agents and the character of Mother was introduced as the spymaster figure. Not everyone thought this was a good idea but on balance I think it worked. Tara obviously had a different status compared to Steed’s earlier partners, she was a professional rather than a gifted amateur and the spymaster figure helped to emphasise that. Patrick Newell was always delightful and Mother and his silent assistant Rhonda added an extra dash of surrealism.

In any case, getting back to The Rotters, there’s a diabolical plot here and it really does revolve round wood. Wood rot can be a remarkably rapid phenomenon. It can be practically instantaneous. This can be remarkably useful, but not necessarily in a good way. In fact dry rot might well be the key to world domination (or at least it might be if you’re a crazy person). It’s a ludicrous premise but it works.

A good episode of The Avengers requires some oddball guest characters. The Rotters has that. In fact it has an amazing number of eccentric characters. It requires a reasonably imaginative villain or villains. The Rotters has that as well. The central idea doesn’t have to be wildly original but it does have to be offbeat. In this case it’s offbeat and it’s fairly original. The Rotters gets bonus points there. Most of all it has to be executed with energy and style and this episode scores there as well. It gets extra bonus points for two killers with impeccable manners and good taste.

So there we have it. Five Tara King episodes chosen totally at random. Four of them either excellent or at the very least extremely good (My Wildest Dream, The Rotters, Love All, Pandora) and one stinker that still has some mildly amusing moments (Homicide and Old Lace).
Posted by dfordoom at 21:36