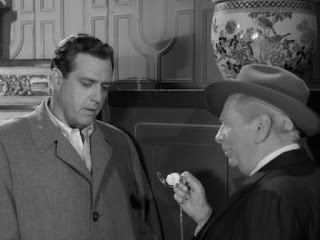 I watched a few season one episodes of the classic 1957-1966 Perry Mason TV series a while back. Recently I’ve been getting heavily into this series, with mixed but mostly very satisfactory results.

Perry Mason was such a popular and iconic series that it’s easy to overlook the fact that it was extraordinarily radical for a 1950s American network TV series. After all the message of Perry Mason is that one should never ever under any circumstances trust the police. The criminal justice system is stacked against the little guy, the police and the District Attorney hold all the cards and they will use those advantages against an accused person. You cannot expect fair treatment from the police. It’s not in their nature to play fair. If you are innocent you have everything to fear from the police. If you are lucky enough to be able to afford a very good and very expensive lawyer like Perry Mason then you have a chance of getting justice. If you can’t afford a hotshot lawyer then you can forget about justice.

These things are not explicitly stated in the series but they are still made very very clear. The TV series unfortunately somewhat softens the message of Erle Stanley Gardner’s novels but it doesn’t soften that message completely. It’s still a pretty uncompromising condemnation of the American criminal justice system.

Here are my thoughts on a few episodes I’ve viewed recently.

The Case of the Substitute Face is a maritime murder mystery, a sub-genre of which I’m excessively fond. Perry and Della are returning to California on a British passenger liner when a passenger asks for his help. She believes her husband Carl Houser  has embezzled a large sum of money from his employer, a Los Angeles bank. He certainly has an immense sum of money on him but things start to get puzzling when it turns out that no money has been stolen from the bank. And then Houser is apparently lost overboard, in circumstances that suggest murder rather than an accident or suicide. 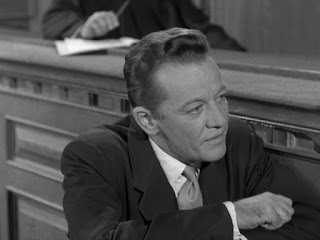 This is a fine example of the skill with which the writers could compress a novel’s worth of plot into an hour-long episode. It stays fairly close to the plot of the novel which happens to be extremely good and which I happened to review last year. Here’s the link to my review.

The Case of the Deadly Double is one of the minority of episodes not based on an Erle Stanley Gardner story. It is however a story dealing with psychiatry, and I’m inordinately fond of psychiatric murder mysteries and thrillers of the 40s and 50s. The more outrageously silly the psychiatric content the more I enjoy such stories. This one deals with what would later be known as multiple personality disorder which is especially fun since it’s a condition that was probably pretty much created by psychiatry.

In this case businessman David Reed is trying to gain sole custody of his son on the grounds that the boy’s mother is an unfit mother. It’s hard to believe that prim and proper housewife Helen Reed (Constance Ford) could be anything less than a perfect mother but unfortunately Helen Reed is also Joyce Martell, and Joyce Martell is a drunk and a floozy and pretty much a textbook example of an unfit mother. Perry Mason gets involved when Helen has a nightmare in which her husband is murdered. It’s obviously more than just a nightmare. Her brother finds himself arrested for murder. The trial becomes a kind of psychiatric circus and it’s all incredibly silly and great fun.

The Case of the Empty Tin (scripted by Seeleg Lester) bears virtually no resemblance whatever to Erle Stanley Gardner’s novel, apart from the fact that there’s a China connection in both. There’s an empty tin in the TV version but it’s not the same tin as in the novel, it doesn’t have the same significance, it’s not found in the same place, it wasn’t placed in that position by the same person. In fact this empty tin was simply shoehorned into the plot to justify the use of the title. All the characters are different, their relationships are different, the criminal’s motives are different, the crimes are different and Perry Mason is retained by a different client for very different purposes compared to the novel. You expect movie and TV adaptations to differ somewhat from their source material but offhand I can’t think of many cases in which the changes have been as drastic as this. In short it’s an entirely different story. 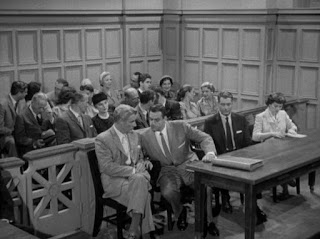 That doesn’t mean it’s a bad story. It’s more straightforward and lacks some of the more bizarre and extravagant features of Gardner’s novel. The plot of the novel would have been way too complicated for a one-hour TV episode. The TV version also eliminates the many instances in which Perry bends the law, or even actively breaks the law. It’s unfortunate that TV networks in the 50s were not going to accept a hero with Perry Mason’s extremely flexible approaches to legal ethics and to technically illegal acts in a good cause, but that was the reality of 50s TV. Here's my review of the novel.

The Case of the Daring Decoy is set against a background of vicious corporate in-fighting. Daniel Conway (H.M. Wynant) is struggling against his bitter rival Warner Griffith to maintain control of the Cal-Texas corporation. Conway receives a telephone call from an unknown woman who claims to have information that will be of immense assistance to him. All her has to do is to meet her in a hotel room. What he finds in the hotel room is a corpse. It appears that he has walked into a trap. Now Perry Mason has to try to get him out of that trap. A good episode.

The Case of the Sulky Girl involves 23-year-old Frances Celane who has inherited a great deal of money which unfortunately is tied up in a trust administered by her uncle. Frances wants Perry Mason to have the trust overturned. Before that can happen murder occurs. Rarely has District Attorney Hamilton Burger had such an easy case to prosecute. The evidence is absolutely clear-cut and unshakeable. Or at least it gives the superficial appearance of being clear-cut, but superficial appearances can be misleading.

This is an episode in which the court-room scenes dominate and Perry demonstrates his knack for legal pyrotechnics. It’s almost cruel watching him set up the D.A. - when Mason explodes his mine poor old Burger just doesn’t know what hit him. An excellent episode. It was based on one of the very early Perry Mason novels, my review of which can be found here. 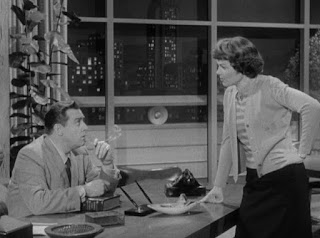 This is a delightfully complicated tale with at least four very plausible suspects with a nice variety of motives. This episode opens, very unusually, with a murder in which we see the murderer actually commit the murder, something that never happens in a Perry Mason story, but don’t worry - that’s a whole different murder with yet another gun. It all gets a bit confusing but it’s supposed to be confusing - even Perry Mason is confused. What matters is that it’s highly entertaining.

I read Erle Stanley Gardner’s The Case of the Rolling Bones the day before watching the TV episode based on that novel. Which I now realise was a big mistake. The most amazing thing about television and movie writers is that they keep thinking they can improve on the plots of people like Agatha Christie or Erle Stanley Gardner. Of course they can’t and they always fail embarrassingly when they try. This is one of the most cleverly plotted of all the Perry Mason novels but the TV episode eliminates all of the really interesting plot ideas. It’s also one of the most interesting of the novels for its passionate denunciation of unethical and illegal conduct by the District Attorney’s office. This also gets eliminated from the TV episode. A superb novel (here's my review) gets adapted into a mediocre TV episode.

The Case of the Long-Legged Models could be sub-titled a Story of Three Guns. The trouble with these three guns is that they’re all identical. Even the owner can’t tell them apart. Yes, they’re all owned by the same man. He has a habit of lending these guns to people. And one of the guns was used to commit a murder. The police can certainly determine which gun fired the fatal shot but no-one seems to know which gun was where, and in whose possession, at the time of the murder. Unless that can be determined there is no way to identify the killer. And Perry Mason unwittingly makes things worse by doing a bit of gun-switching himself. This is great television.

You can be sure of more Perry Mason posts in the not too distant future.
Posted by dfordoom at 03:50