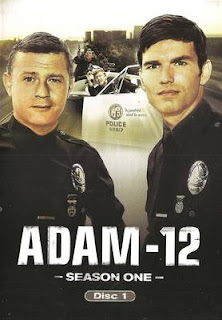 In the early 1950s Jack Webb came up with an idea that proved to be one of the great television ideas. It was an idea for a cop show about two completely ordinary cops just doing their jobs, working on all sorts of routine cases. The two cops would be detectives and they would rotate to various squads within the department, investigating everything from shoplifting to confidence trickers to kidnapping and murder. The crucial point though is that Joe Friday and his various partners were not super-cops, they were not maverick cops or anything like that. They were good sound professionals and they knew that police work is mostly about methodically and patiently following procedure. Webb was confident that the public would be enthralled by such a series and he was right. The series was  Dragnet, still possibly the best cop show ever.

In the late 60s Webb came up with a slight but very clever variation on the same theme. It would be again a series about totally ordinary cops just doing their jobs, dealing with everything from the most trivial to the most serious crimes. The difference was that this time the two cops would be uniformed officers and they’d be in a patrol car. This series was Adam-12 and it was not only a hit, running from 1968 to 1975, it was in its own way just as iconic as Dragnet.

The idea of a series dealing with uniformed cops was pretty radical in 1968. And the series goes to great lengths to emphasise that the work of uniformed officers is totally different from the work of detectives. Uniformed cops deal with immediate issues, not ongoing investigations. In one episode the two cops are called to an apartment and find a man who appears to have been murdered. Their job is to call it in and keep the crime scene undisturbed until the detectives arrive. Then their job ends. In cases like this the uniformed cops may never know the results of the investigation. It’s a very different perspective on police work compared to almost every other cop show and adopting such a realistic approach was an incredibly bold move. Would viewers accept plot lines that would never be resolved? Would they accept loose ends just left floating? It was a gamble but in fact viewers loved the realism of the show.

The two protagonists are Pete Malloy (Martin Milner), an experienced officer who is about to quit the job after seeing his partner killed, and Jim Reed (Kent McCord), a young and very keen probationer. Malloy is horrified by the idea of being saddled with a rookie as partner and is now even more determined to resign but once they’re out there on the street Malloy realises that Reed has the makings of an excellent cop but he’s going to need someone with plenty of experience to keep him alive until he learns enough to temper his enthusiasm with judgment. 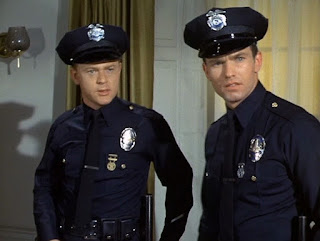 They're an ill-assorted pair. Malloy is a bachelor who lives for the moment. He is cheerfully irresponsible and the one thing that he’s really scared of is marriage. Reed is a real straight arrow, already married and already making plans for buying a house and having lots of kids. They’re so ill-assorted that they get on really well.

The half-hour format with each episode dealing with multiple crimes (or incidents) was quite daring as well. It means that there is very little in the way of actual plot lines. Mostly we’re just seeing brief vignettes of routine police work. Occasionally Malloy and Reed will get a call and try to sort out a problem only to be called to the same address shortly afterwards to sort out the exact same problem all over again. In some cases (especially domestic disputes and disputes between neighbours) even after multiple calls the problem will still be unresolved and we know and the officers know that these are problems that just don’t have an answer. Malloy has long since learnt not to worry too much about this. It’s just something a cop has to get used to. Reed is still finding it hard to accept.

When there’s a call for Adam-12 (this being the identifying number of the car assigned to Malloy and Reed) they can find themselves faced with anything from a minor traffic violation to murder. From time to time they get shot at. Sometimes they never find out why someone wanted to shoot at them.

Adam-12 began production at a time when crime seemed to be spiralling out of control in the U.S. and it was becoming a major political issue. Drugs were devastating communities. The foundations of society appeared to be decidedly unstable. Adam-12 does not ignore this social malaise completely but it chooses not to focus too much on it (in season one at least). This was probably wise. Whenever American (or British for that matter) cop shows tried to be socially aware and tried to confront those social tensions head-on the results were usually dire. And whenever cop shows tried to deal with “youth culture” the results were invariably cringe-inducing). Adam-12 deals with hippies and similar horrors on occasion but manages not to be too embarrassing about it. 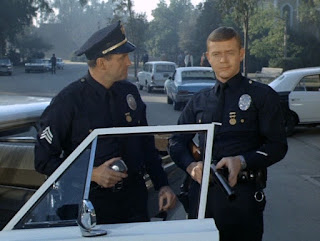 Adam-12 is certainly not a series that tries to bludgeon the viewer with a political message. Insofar as there is any message it is that the police have a difficult job and they do their best, and without the police there would be chaos. The law is sometimes clumsy but it’s necessary. So there is perhaps a very subtle pro-law and order message. Maybe Adam-12 takes an overly idealised view of the police but the fact that the series is careful not to take an overtly political line is a blessing.

Martin Milner’s performance as Pete Malloy is just what the series requires. He gives the impression that he’s watched lots of old episodes of Dragnet and he’s got the Jack Webb laconic style down pat. And he makes it work just as effectively as Webb did. It’s not that Joe Friday or Pete Malloy are uncaring. But they’re professionals. They know that if you get emotionally involved even slightly then you can’t do your job properly. And if you can’t do your job properly you’re not helping anybody. Malloy hopes to teach this lesson to Jim Reed. It’s a lesson every cop has to learn. Reed is taking a while to accept this. He’s finding it hard to close down his emotional responses on the job. Kent McCord gives a terrific performance that perfectly complements Milner’s.

Adam-12 seems to be easily obtainable on DVD in all regions.

Adam-12 succeeds splendidly in doing exactly what it gets out to do - showing us ordinary cops at work. And it makes it enthralling viewing. Highly recommended.
Posted by dfordoom at 08:16