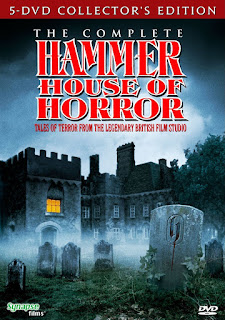 Hammer Films were in fairly deep trouble by the late 70s. This is often blamed on changing audience tastes but it also had a lot to do with poorly conceived financial arrangements that meant that even their films that did well at the box office didn’t make money for the studio. And then in 1979 they spent a lot of money on a catastrophically ill-advised remade of The Lady Vanishes which was a massive flop.

But they weren’t ready to give up and die just yet and they hadn’t run out of ideas. In fact they came up with an extremely good idea - a horror anthology TV series. Hammer House of Horror went to air in 1980 and was quite well received by both critics and audiences. It really was a very sound idea. ITC (with whom they partnered for Hammer House of Horror) had had immense success with the Thriller anthology series in the mid-70s. Thriller concentrated on psychological rather than supernatural horror. There was no point in merely doing a retread of Thriller so it made sense for Hammer House of Horror to specialise in out-and-out supernatural horror. And Hammer had always been good at getting surprisingly high production values from very tight budgets, so again TV production seemed like the answer to their problems.

One of the many problems Hammer had faced in the 70s is that for commercial reasons it was necessary to keep upping the ante as far as violence, gore, sex and nudity were concerned. Hammer were OK with this up to a point, but only up to a point. As it became increasingly difficult for them to make feature films the move to television production made a lot of sense. They could keep the gore and nudity at very moderate levels whilst still being, by television standards, reasonably daring. Hammer House of Horror has occasional nudity and occasional gore but mostly it relies on the writing, the directing and the acting. All of which are of fairly high standard.

Witching Time kicks off the series and is, very obviously, a witchcraft story. Composer David Winter lives at remote Woodstock Farm and he is not dealing with things very well (he suspects his wife is having an affair and he’s right). After a severe thunderstorm he finds a woman in the barn. She claims that her name is Lucinda Jessup and she was born at Woodstock Farm. In the year 1627. She escaped from the witch-hunters, and ended up in 1980.

Lucinda decides that David now belongs to her, which means she will have to find a way to get his strumpet of a wife out of the way. It’s the beginning of a nightmare for both David and Mary.

It’s not a dazzlingly original idea but it’s done reasonably well. The budget for the TV series was limited which meant that period settings were pretty much out of the question. In this case the idea that one of the characters is from the 17th century and that the events in the present day are intimately connected with events three centuries before means that at least you get some period flavour. And it certainly has as much gothic atmosphere as you can get in a modern setting. 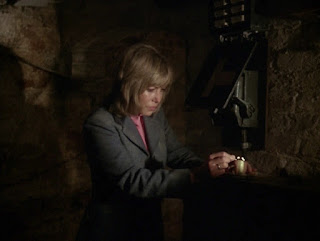 There is the suggestion that Lucinda may not really exist. She may be a figment of David’s imagination (he is overworked and overstressed as well as being extremely upset by his wife’s infidelities), but Mary sees Lucinda as well. We are still left with the possibility that it’s a folie à deux, a shared psychosis, brought on in David’s case by overwork and jealousy and in Mary’s case by guilt. But Lucinda could be real. It’s left as an open question.

Whether it’s a real or imagined horror the bigger question is whether it’s going to destroy David and Mary.

The cast is excellent. Jon Finch, whose star had burnt very brightly very briefly in the 70s, gives a pretty effective portrayal of a man living through a nightmare. Prunella Gee is very good as Mary, managing to make her fairly sympathetic in spite of the fact that we know she is unfaithful to her husband. Patricia Quinn, quite correctly, chews the scenery in a major way.

The Thirteenth Reunion moves the series in black comedy territory. Ruth Cairns is an ambitious reporter who longs for a chance to get away from writing for the Women’s Page. An assignment to check out a new weight loss program provides her with her opportunity. It’s a fat farm that uses humiliation as an incentive but Ruth soon discovers that there’s something much weirder going on. It’s certainly odd that there seems to be a connection between a weight loss clinic and a form of funeral directors. What the connection is will seem obvious to the viewer but there’s an unexpected and very nasty twist in store at the end.

This one was directed by Peter Sasdy who did several movies for Hammer. Sasdy was a fine director and does an excellent job here. Considering the subject matter there’s surprising little gore and there’s no nudity at all, in contrast to Witching Time. This is another quite successful attempt to achieve a genuinely creepy gothic atmosphere in a contemporary setting. There’s plenty of humour and it’s very black indeed. The Thirteenth Reunion is creepy but highly entertaining.

Rude Awakening is another Peter Sasdy-directed episode and once again it’s a black comedy. Norm Shenley (Denholm Elliott) is a middle-aged real estate agent who has a nightmare and then wakes up. Or does he wake up? Does he have a series of dreams? Do any of them correspond to reality? Are they just dreams or is he going insane? Dreams always have the potential to be spooky and this story milks the idea for all it’s worth. 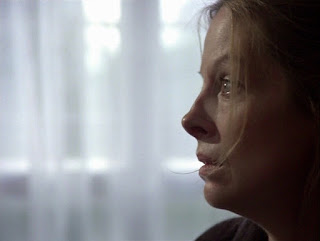 The dreams keep taking him to an old mansion (which is either half-ruined or in perfect condition or not there at all depending on the dream) which of course adds a slightly gothic touch.

Denholm Elliott does a fine job as a man who hasn’t the faintest idea if he’s dreaming or awake. The whole cast is good but the standout performance comes from Lucy Gutteridge who plays Norman’s sexy secretary Lolly. She gets to play five different versions of Lolly each with a different sexy image. It’s a fine comic performance and she and Elliott play off each other delightfully.

Sasdy comes up with plenty of subtly unsettling images and a couple of genuine chills. He strikes the perfect balance between the black humour and the out-and-out horror. An excellent episode.

Growing Pains is an evil child story. After losing their own child Terence and his wife Laurie Morton adopt another, a boy named James. Terence is a scientist who thinks he’s going to save the world and Laurie has her charitable committees she’s convinced are going to save the world. They think of themselves as deeply caring people and they love the idea of humanity in the abstract but they’re clueless when dealing with actual people. They seem to like the idea of having a child as long as it doesn’t take up too much of their valuable time. Saving the world is pretty much a full-time job.

Young James is clearly odd in a rather disturbing way and he clearly does not like his new parents. Strange and very upsetting things start to happen and Laurie is convinced that James is responsible.

This episode has some funny moments but unfortunately I have an awful feeling they weren’t meant to be funny. The moments that are meant to be creepy and/or scary either fall flat or they’re laughably inept. Director Francis Megahy just doesn’t know how to do scares or suspense. 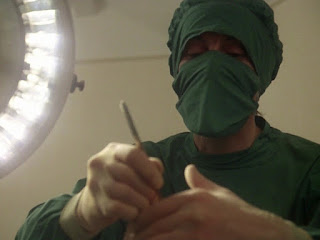 The main problem though is the script which has a jumble of ideas, all potentially workable, but they don’t seem to all belong to the same story. Is it a ghost story or is it a science fiction horror story? Does it deal with deliberately engineered evil or simply guilt? Is there any actual supernatural agency at work? I have no idea. The resolution doesn’t resolve anything. We still have no idea what was going on or why.

The acting is problematic. Matthew Blakstad’s performance as young James is odd but since the character is apparently supposed to be enigmatic it’s possibly appropriate although it’s also very uneven in tone. Terence and Laurie are supposed to be so self-absorbed that they hardly even noticed they had a son and Gary Bond and Barbara Kellerman manage that quite well but then when events come to a crisis and they should show some emotion they don’t pull it off, and Barbara Kellerman gives the impression that she had no idea what was expected of her. So Growing Pains really doesn’t work at all.

Charlie Boy is quite good. When his Uncle Jack dies Graeme gets his art collection as his share of the estate. It includes a Central African fetish statue which Graeme and his wife name Charlie Boy. In a moment of frustration Graeme sticks a knife in a photo. And the people in the photo start dying. After four deaths it seems pretty clear that Charlie Boy is to blame. There is a possible solution but it proves to be more difficult than one might expect.

It’s a good example of how to do effective horror without the need for expensive makeup or special effects. It’s also a story that doesn’t require excessive amounts of gore (although this one does definitely have some gore). It’s the idea that creates the terror.

Leigh Lawson is quite good as Graeme, a man who finds he has unwittingly unleashed an appalling horror. Marius Goring is fun as antiquities dealer Heinz who may be the only one able to stop the slaughter. 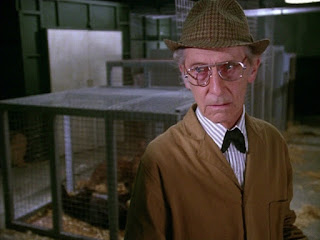 It’s not original, but most horror stories aren’t. What counts is whether the right atmosphere is created and whether the scares are executed well enough and Charlie Boy succeeds on both counts. Plus it deals with voodoo (or at least something very closely related to voodoo) so it gets bonus points for that.

The Silent Scream is notable for starring Peter Cushing. Chuck Spillers (Brian Cox) has just been released from prison). Prison visitor Martin Blueck (Peter Cushing) had offered to help him after his release and the old man does offer him a job feeding his animals. Blueck runs a pet shop but he has quite a menagerie of wild animals as well. He claims to be devising a more humane method of confining animals without the use of cages or bars. In fact he is training them to accept confinement by means of fear. And he would like to extend his experiments to humans.

Chuck is not the sharpest knife in the drawer and the first thing he tries to do it to rob Blueck’s safe. Big mistake. Now Chuck is going to be trained. Chuck’s wife Annie (Elaine Donnelly) heads off to the pet shop to investigate when Chuck fails to return home but getting Chuck out of the mess he’s in may prove to be both tricky and dangerous.

Apart from being a very effective horror piece The Silent Scream offers some quite acute psychological insights into the nature of fear. The ending is predictable but in fact it’s not the ending at all. There’s another, much cleverer and nastier, twist still to come. The Silent Scream really is great stuff.

So after viewing six of the thirteen episodes I’m very very impressed with this series. One dud episode but the others range from good to superb. I’ll be posting on the remainder of the episodes once I get a chance to watch them so stay tuned.
Posted by dfordoom at 06:43