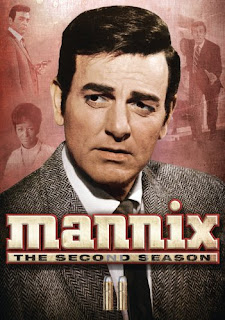 Mannix was completely reinvented for its 1968 second season. In season one Joe Mannix works for a huge high-tech detective agency that relies heavily on computers. Mannix is a loner by nature but working for Intertect means he’s basically just an employee and is expected to be a team player. It’s a clever setup with Mannix never being entirely happy at Intertect while at the same time he has to admit that having vast resources on which to rely can be very useful.

Some fans of the series prefer the more innovative feel of the first season whilst others prefer the straightforward smooth professionalism of the later seasons. I tend to fall into the former camp but I have to admit that season two is very very good.

One thing that was carried through from the first season was the pacing which was considerably faster than most 60s crime series.

Mike Connors is once again terrific. I do miss his verbal sparring with Joseph Campanella which was a highlight of the first season.

Once again Mannix is a private eye who gets himself into a lot of trouble. It’s not a real Mannix episode unless Joe gets himself beaten up or shot. In some episodes he beaten up and shot. I wouldn’t say that Mannix is more violent than earlier private eye series (Mickey Spillane’s Mike Hammer back in the late 50s was incredibly violent) but it was unusual in the 60s to see the private eye hero on the receiving end so often.

The Silent Cry is a kidnapping story. There was a witness to the kidnapping. Or at least a witness to a telephone call in which the kidnapers discussed their plan. The only problem is that the witness is deaf. To the police it seems hopeless but Mannix is convinced that the deaf woman can provide the information to crack the case. A great episode with which to start the second season. 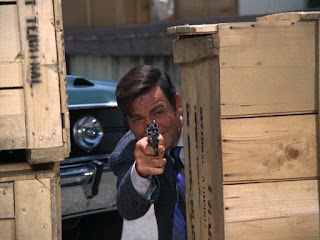 Comes Up Rose is also pretty good. An ex-cop hires Mannix to find his wife, who is an ex-prostitute. It could be that the ex-cop is really the one in trouble.

In To the Swiftest, Death Mannix takes up car racing. A fellow competitor is killed in a race. His wife thinks it was actually murder. A cleverly plotted episode.

A Copy of Murder takes Mannix to a small town in California. An author who was writing a book on a celebrated murder case has been murdered. Mannix has to find out who killed the writer but more importantly he also has to find the missing last chapter of the book which is almost certainly the key to both murders. A very good episode.

Edge of the Knife is an attempt to do a kidnaping story with an original twist and while it’s a bit far-fetched it’s an intriguing concept.

In Who Will Dig the Graves? a reclusive tycoon wants Mannix to find his wife who might be dead but then maybe she isn’t. As so often Mannix finds that he hasn’t been told the full story and finding out what is really going on might well be a matter of life or death. A reasonable episode.

In The Need of a Friend Mannix has to make amends for a serious mistake he made several years earlier. He was responsible for sending an innocent man to prison. Mannix wants to right the wrong but that’s going to be a challenge. The man doesn’t want help and  maybe he’s decided to right that wrong in his own way. Not one of the better episodes of this season.

Night Out of Time presents Mannix with a client who has no memory of anything that happened the night before, and during that night he may have committed a murder. Mannix has to be both psychologist and investigator. A good episode. 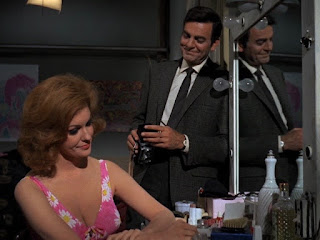 A View of Nowhere is a view of a murder. Mannix sees the murder from a helicopter but it seems that no-one was actually murdered. Mannix isn’t buying that. An intricate plot that comes together quite nicely.

In Fear I To Fall Mannix gives evidence that is sufficiently damning to ensure a man’s conviction but he’s not at all sure the man was really guilty. It’s another story in which Mannix relies mostly on a sheer bloody-minded refusal to admit defeat rather than any particular brilliance as a detective. But perseverance can be more important than brilliance.

Deathrun is great stuff. Mannix tries to help an old buddy who works as a fire ranger and spends most of his time in a remote fire lookout tower. His wife is concerned, but maybe she isn’t his wife. The sheriff is not happy about Mannix’s presence but why is he quite so hostile? Mannix is more than a little confused but he can’t back out of this case now.

In A Pittance of Faith Mannix is hired to investigate the accidental death of a woman. He is hired in odd circumstances and then fired in even odder circumstances. But now he’s convinced there is really something to investigate. Some nice plot twists here.

In Only Giants Can Play Mannix is drawn into what might be a genuine or a manufactured political scandal or a case of blackmail or something else entirely. A fine episode.

Shadow of a Man is one of several episodes in which Mannix’s Korean War service plays an important plot role. A man tries to shoot Mannix but then claims to have no memory of having done so. Mannix is inclined to believe him but he has a strong feeling there’s something here worth looking into. The key to the puzzle lies in the past, in events that took place during the Korean War. A very good episode. 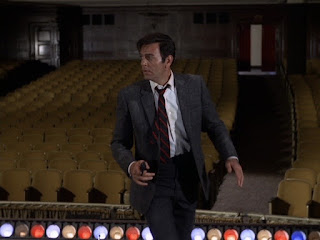 The Girl Who Came in with the Tide starts with Mannix being asked to identify the body of a young woman. She might have been the woman he’d been hired to find. She isn’t that woman but he does recognise her. It was an accidental death but something bothers Mannix. This girl had too many connections with too many suspicious people and suspicious events. It’s a convoluted but gripping tale. Excellent stuff.

Death in a Minor Key is a rare misfire. Peggy is dating a jazz musician whose past has now caught up with him. Mannix has to go to a small southern town to find the key to unravel an old mystery. Too much preachiness, and too much obviousness.

End Game is another episode in which Mannix’s service in the Korean Way plays a major role. One of the men with whom he served is playing a deadly and perverse game of murder and Mannix has to play as well, whether he likes it or not. And one false move will mean death. Exciting stuff.

Odds Against Donald Jordan starts as a missing persons case. His sister hires Mannix to find him. It seems that someone is definitely out to get Donald Jordan. It could his wife, his sister or his business partner - they’re all lying about something. And Donald Jordan is lying as well. There are lots of red herrings and the ending is pleasingly unexpected. Good stuff.

Last Rites for Miss Emma puts Peggy at centre stage when she falls for a guy who was shot during a robbery. Mannix is investigating the robbery for an insurance company and Peggy’s loyalties are about to be tested. An OK episode. 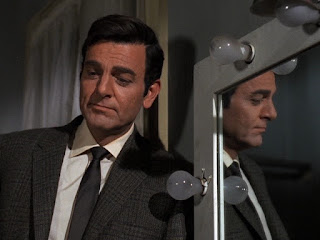 The Solid Gold Web is the story of a spoilt rich girl who meets a good-looking hoodlum and falls in love with him, as spoilt rich girls are wont to do. Then she finds out that he’s not a nice guy. And then the hood dies, when he’s hit by her car. So she cracks up. Her rich daddy wants Mannix to sort her out. No-one knows that she killed the hood so Mannix’s job is to find out why she’s cracked up. The resolution is pretty predictable but it’s well-executed and the beach scene is very well done. Not a great episode.

Merry Go Round for Murder starts with Joe being offered a lot of money to protect a guy named Frank Devereaux for one night. Devereaux has a briefcase with him, containing a quarter of a million in cash which he swears is clean money. Joe is about to turn down the job when a couple of hoods try to kill Devereaux and snatch the money and in the process they kill Pete Neal, who works for the same casino at Vegas that Devereaux works at. Now Mannix is interested. There are lots more plot twists to come in this excellent episode.

To Catch a Rabbit opens with a burglary that leaves a man dead. But the police don’t know about the burglary. They write it off as an accidental death. The man’s wife hires Mannix to prove it was a murder. He finds the evidence for the burglary but the trouble is that he’s still not convinced he knows the whole story. Meanwhile a Mexican named Carlos is charged with the murder. This is a somewhat disappointing end to the season - an overly preachy episode with plot subordinated to the social message.

Mannix is fast-paced and stylish and very polished. It has plenty of action and excitement and glamour, and lots of beautiful women. There’s the occasional dash of humour. Production values are high and there’s quite a bit of location shooting. It has a very likeable charismatic star. It has that terrific opening credits sequence with that great Lalo Schifrin theme tune. On the whole it’s a fairly serious private eye series but it’s serious without being grim or cynical and the emphasis is on entertainment. And it has something else that puts it ahead of the pack - extremely good scripts. I’m not sure what else you could ask for in a private eye series. It isn’t deep or profound but as straightforward action-adventure television it’s pretty close to perfect.

I’m not suggesting it’s the best American P.I. series ever made but it has to be in the top five (along with the late 50s Mike Hammer, The Rockford Files, Magnum, P.I. and I have no idea what the fifth one would be).

It’s easily obtainable on DVD and the transfers are pretty good. Mannix season two is very highly recommended. Aldo check out my season one and season three reviews.
Posted by dfordoom at 03:44