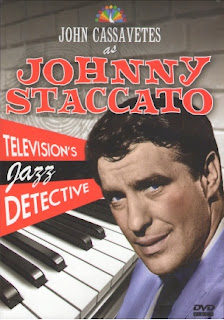 The late 50s and early 60s was a bit of a golden age for American private eye TV series. Some of these series hold up extremely well today. Others not so much. Peter Gunn was a very successful series at the time and is generally pretty well thought of. For some reason I’ve never warmed to this series at all. Johnny Staccato, made in 1959, was less successful at the time but seems to me to be far more interesting.

Comparing Peter Gunn to Johnny Staccato is interesting because they are superficially very similar. In both there’s the same jazz ambience, the same background of night-clubs and musicians and seedy glamour, the same attempt to create an atmosphere of danger, dynamism and excitement. There are however a few significant differences. As played by John Cassavetes Johnny Staccato is more edgy, he’s cocky but with a touch of self-doubt so the cockiness comes across more as bravado than anything else. He’s less perfect than Peter Gunn, more human, and he’s more sympathetic and more interesting.

There also seems to be more at stake in Johnny Staccato. When Johnny takes risks to help people out you get the feeling that the risks are very real, whereas Peter Gunn is too much the perfect PI for whom such things are easy.

Johnny Staccato also feels like a much more authentic window into the slightly dangerous night-time world of jazz and night-clubs than Peter Gunn (which often seems bemused by this strange world). Much of the action takes place in Waldo’s, a kind of jazz basement club. Waldo (Eduard Ciannelli) is an elderly Italian. He and Johnny are close friends.

I reviewed the first half of the first (and only) season of Johnny Staccato a while back. I’m now going to take a closer look at the second half of that season.

Most of the half-hour American cop/private eye series of this era were made quickly on fairly tight budgets but within those limitations Johnny Staccato manages to be quite stylish. There is a very marked film noir flavour, and it feels like the genuine article rather than the superficial noir style of some of the other crime series of the time. It’s noir in content as well as in the visuals. 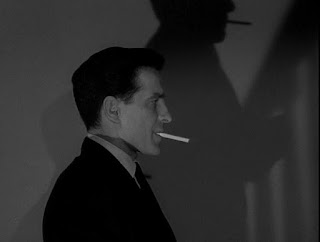 John Cassavetes is an actor who took his craft very seriously, perhaps sometimes too seriously for my tastes, but he really does make an effort to make Staccato a three-dimensional character. Yes he’s a bit of a bleeding heart but he has guts and he has determination. He doesn’t seem like a stereotypical tough guy PI but he’s actually tougher than he looks. It’s possible that having a hero who is not quite a conventional tough guy counted against the series and may be part of the reason it was cancelled after one season. He was perhaps a bit too cerebral. Johnny Staccato may have been a bit ahead of his time - he is a private eye who might have been more at home in the 70s than in the late 50s.

Not surprisingly, given his later career as a director, John Cassavetes took the opportunity to direct five of the episodes of Johnny Staccato.

In The Return Johnny is trying to help a disturbed Korean War vet who has busted out of an army mental hospital and intends to kill his wife. The guy really is serious about killing his wife but he’s basically a decent guy who has gotten seriously mixed up and Johnny doesn’t want to see him shot by the police, which seems to be a distinct possibility. Johnny also wants to make sure the gut doesn’t kill his wife! Johnny has a special reason for wanting to help the guy since he’s a Korean War vet himself. It’s a good episode and a typical one in that Johnny has a strong personal reason for taking risks to help someone out and it emphasises the fact that Johnny has had to deal with personal demons, and has done so successfully. We get a glimpse into his interior world.

The Unwise Men is a Christmas episode in which a department store Santa (who happens to be one of Johnny’s buddies) is roped into a robbery by his no-good brother. It’s a mess but Johnny thinks he can get him out of it. There’s nothing in it for Staccato but he’s a guy who doesn’t let his friends down. 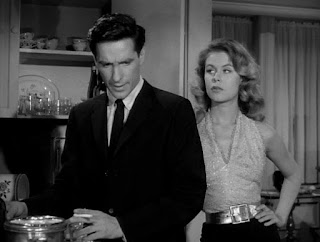 In Collector's Item Johnny has managed to land a good job in a prestigious club for an old-time black jazz musician friend of his. Now the friend has been caught up in a murder and is being blackmailed and while there may have been witnesses none of them are going to come forward. It’s an honest look at a world where nobody is willing to trust the police. The climactic scene in the stadium is done very well.

The Man in the Pit is a broken down jazz musician whose son wants to kill him. Staccato wants to save the son from being a murderer and find out why a harmless old trumpet player would be doing things that seem so out of character.

The Only Witness is Staccato and what he’s a witness to is a gangland killing. And the killer knows Staccato is the witness so it seems highly likely that he’ll take steps to remove him, permanently. This is an episode that sums up why this is such an unusual PI series. Staccato carries a gun (he often does) and this time he draws it twice. But he never fires it. It’s just not the kind of PI series that grabs every opportunity for a shoot-out.

Night of Jeopardy opens with Johnny taking a walk when suddenly a gun battle erupts. Johnny kills one of the hoods, Dave Roman. The hood in question was carrying a package containing plates for counterfeit money and the counterfeiting gang (very big-time mobsters) wants that package. What nobody knows (including Johnny) is that Roman hid the package just before he died. The mobsters think Johnny has the package and they’re prepared to kill all of Johnny’s friends in order to persuade hm, to give them the information he doesn’t have. An unusually violent episode and the violence is quite graphic by 1959 standards. A good episode.

The “hey there’s a guy out there who is an exact double for the hero except that he’s evil”  has to be the most tedious of all tedious chichés. Double Feature is a typical example of the cliché in action. In this Staccato’s double is a hit-man. This episode is at best average and is notable mostly for being extremely violent and for showing the cops in a very unfavourable light.

In The List of Death a dying mobster has a list of things he wants to do before he dies and he persuades Staccato to help him. The last item on the list is the surprise one. Very good episode. 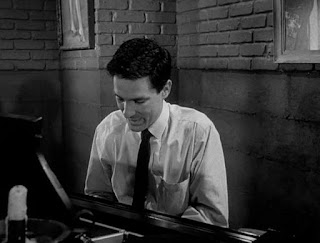 Solomon is one of the episodes directed by John Cassavetes. A famous trial lawyer is prepared to take desperate steps to save a client, a woman accused of murder. These steps are not exactly what you might call ethical. He wants Staccato to help him. Cassavetes makes some interesting directing choices. There’s a hint of German Expressionism here and it’s also very stagey, and obviously deliberately so. Cassavetes is aiming for intense psychological drama and he gets it. Elisha Cook Jr (one of my all-time favourite American character actors) gives the most amazingly over-the-top performance I’ve ever seen from him while Cloris Leachman is quite bizarre as the accused woman. It’s all very ambitious and it’s not the sort of thing a series like his could get away with very often but it is fascinating and different. It takes risks and in its own way it works.

An Act of Terror is a story about Thad Clinton, a young ventriloquist, hires Johnny to find his wife. Now any ventriloquism story is going to have a certain amount of weirdness and this one is no exception. It’s not difficult to figure out what’s really going on but at least it’s well executed.

An Angry Young Man is a punk named Carl Humboldt who has a job in a bookstore that is a front for a racket. Johnny has to help him out because he’s fond of the kid’s father and aunt. This one tries a bit too hard to be cute and warm-hearted and it’s a bit contrived. The characterisation of Carl is all over the place and it’s unconvincing. Not one of the better episodes.

In The Mask of Jason Johnny has to act as bodyguard to a contestant in a beauty pageant (the contestant is played by a young Mary Tyler Moore). She’s being menaced by a very very ugly man. Johnny soon discovers that there are other kinds of ugliness and that the ugliness inside can be the worst of all. Quite a good episode. 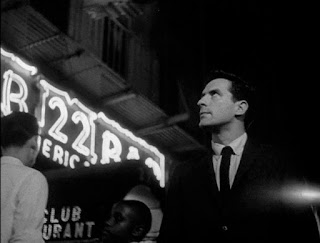 No American TV series would be complete without at least one episode in which the sophisticated urbanites who dominate the industry lecture the audience on how evil small-town Americans are, and how every rural American is a dumb, ignorant, knuckle-dragging bigot. That’s what A Nice Little Town does. An old friend wants Johnny’s help because her brother was murdered and the police in the small town in which she lives won’t do anything about it because the whole town thinks the brother was a commie. Staccato tries to get things moving and further tragedy follows. Staccato gets to make lots of speeches. It’s all very embarrassing and silly but you have to realise that the sorts of people who earn their living as scriptwriters honestly seem to believe that if they ever set foot outside a big city they’d be immediately murdered. A terrible episode.

Swinging Long Hair is an intriguing way to end the season (and the series as it turned out). A concert pianist from  behind the Iron Curtain is on the run. Agents from his own country are hunting him down. Why he hasn’t asked for political asylum isn’t mentioned. In any case he gets a job as piano player at Waldo’s. He thought that moonlighting as a jazz musician would be a good way to avoid attracting attention. This proves to have been something of a mistake. This is a very film noir episode and a very good one.

Mention should be made of the great jazz theme tune which promises glamour and excitement (which the show generally delivers). In fact there’s jazz all the way though this series and Cassavetes manages to be fairly convincing as both private eye and musician.

The complete series of Johnny Staccato (twenty-seven episodes) is available on DVD in Region 1. The transfers are very good but there are no extras. Johnny Staccato is highly recommended.
Posted by dfordoom at 07:20