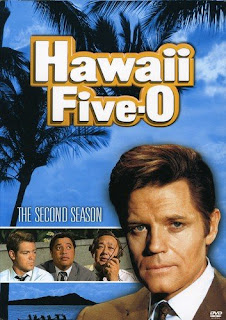 Season two of Hawaii Five-O which aired in late 1969 and early 1970 is very much the formula as before, and since it’s a very good formula that’s a good thing.

There are no cast changes. Jack Lord as Steve McGarrett still has the same team, the classic Hawaii Five-o team, with James MacArthur as Danno Williams, Kam Fong as Chin Ho Kelly and Zulu as Kono.

And Jack Lord of course has charisma on steroids.

Hawaii Five-O was never just a cop show. The whole idea of the (mythical) state police unit Five-O was that it would deal not just with major crime but also crimes with international ramifications as well as terrorism and even espionage. Five-O is a kind of Hawaiian FBI. So there were always a few spy thriller episodes in each season (and you’re never surprised to see the notorious master spy Wo Fat turn up yet again).

And in each season there are one or two other episodes that are unconventional and perhaps even outrageous. It’s all part of the unique flavour of a unique series.

I think the second season is perhaps just a little stronger than the first. Or it might be more accurate to say that it’s more consistently strong. The first season included a handful of definite misfires (which of course could be said about virtually every television series ever made). In the second season even the misfires (like King Kamehameha Blues) are only partial failures - they’re still at least moderately entertaining.

Once again Hawaii itself plays a major role. More than any other police drama series Hawaii Five-O  is a series that could not really be set anywhere else. 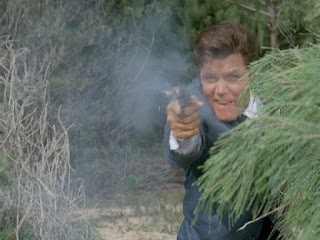 There was also a determination to show us that there was more to Hawaii than Waikiki Beach and Diamond Head. This is the real Hawaii (as it was in 1969 anyway). Like everywhere else it has its seedy corners but they’re seedy in a distinctively tropical kind of way. There are ramshackle beach huts occupied by drifters who have decoded that if they’re going to ruin their lives with drink and drugs they might as well at least do it in the sunshine. And it has very ordinary people as well, just trying to get by.

There are some pretty decent spy thriller episodes like Forty Feet High and It Kills! which features the return of Wo Fat and Nightmare Road in which a top defence scientist is framed for murder by foreign agents. Another is Three Dead Cows at Makapuu in which the fate of civilisation as we know it hangs in the balance, and McGarrett wonders whose side the U.S. Army is really on. Sweet Terror deals with a terrorist plot to destroy Hawaii’s sugar industry and it’s a better episode than it sounds.

Leopard on the Rock is another story of international intrigue with a notorious dictator making an unexpected trip to Hawaii causing Five-O plenty of worries.

A Thousand Pardons - You're Dead! which is the season opener is a taut story about a racket exploiting army deaths.

The slightly offbeat episodes (which are to be found in every season) include To Hell with Babe Ruth in which a lone Japanese thinks the war is over and wants to blow up Pearl Harbor. Killer Bee is a bit strange also but it’s a fine story about war and psychosis. It’s a nasty twisted little tale. A Vietnam veteran may be spiraling back into madness, kidnapping children. But what’s really going on could be quite different although madness is certainly involved. A rather baroque plot but it works for me. 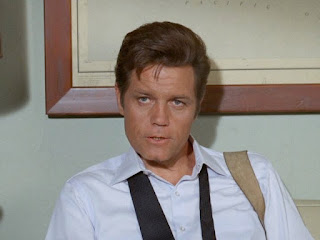 The Joker's Wild, Man, Wild! is a nicely twisted tale of a girl and a couple of guys playing a rather sick and very dangerous game. And in The Singapore File McGarrett is on the run in Singapore and is the hunted rather than the hunter.

The straightforward crime are mostly pretty good as well. In All the King's Horses McGarrett risks his career by standing by a notorious big-time gangster who claims to be reformed. It’s a good episode for demonstrating McGarrett’s intense loyalties and his extraordinary stubbornness. Just Lucky, I Guess is a gritty story about the murder of a prostitute.

McGarrett is the target in several season two episodes including A Bullet for McGarrett (in which Wo Fat makes another appearance so this counts as a spy drama episode). Which Way Did They Go? is an ingenious scheme of revenge aimed at McGarrett.

McGarrett is in the firing line again in Blind Tiger. This time he is blinded by as car bomb. His sight is expected to return but while undergoing rehabilitation he has to learn to accept being dependent on someone else, and of course he knows that there is certain to be another attempt on his life. Not a bad episode.

Run, Johnny, Run is about a young man who had hoped that joining the Navy would get his life back on track. McGarrett, a friend of the family, had hoped so too but it doesn’t seem to have worked out. It’s an episode showing McGarrett’s human side and it’s an OK story. 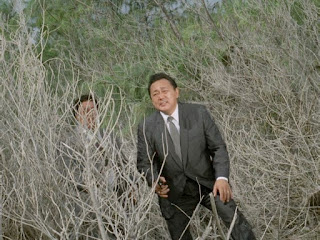 The One with the Gun begins with a rigged poker game and a murder and what follows is a brother’s quest for revenge. Some good twists in this story.

Most Likely to Murder concerns the murder of a cop’s wife. Danno and the cop concerned are old friends so Danno is particularly keen to crack this case. The investigation uncovers all sorts of disturbing secrets and puts Danno under a lot of pressure. A fine story.


Nightmare Road is a classic spy drama. A foreign government wants to persuade an American scientist working on a vital military project to defect. They intend to put him in a position where he will have little choice in the matter. If McGarrett doesn’t solve this case quickly it’s going to be too late. Lots of suspense in this one and a somewhat cynical ending. Good stuff.

Three Dead Cows at Makapuu is a two-parter and it begins with, you guessed it, three dead cows being found at Makapuu. What matters though is the very very unnatural way that the cows died. The locals think the U.S. Army has been experimenting with nerve gases again and Steve McGarrett is inclined to think they may be right. The truth is even more terrifying and Five-O are faced with a race against time to save Hawaii. An excellent episode. 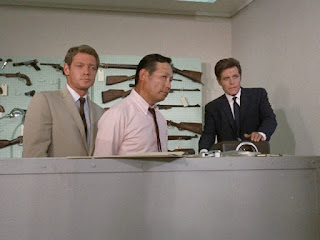 Kiss the Queen Goodbye is a neat little heist story. The Queen of Polynesia is a fabulous emerald which is about to be presented to the people of Hawaii but it seems that several very very good paste imitations of the jewel have been made. McGarrett doesn't like this at all. It sounds like somebody is planning to do a switch. A faded movie star has been blackmailed into very reluctantly participating in just such a scheme. This is good entertaining stuff to close out the season.

Hawaii Five-O really gets into top gear with season two which is even better than season one. Everything is working like a well-oiled machine. Insanely entertaining television and highly recommended.

The series is available on DVD and seems to be easy to find just about everywhere.

I reviewed Hawaii Five-O season 1 a while back.
Posted by dfordoom at 03:05