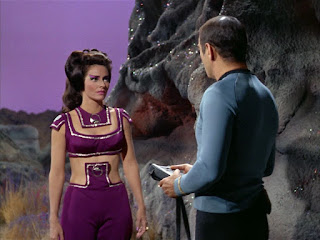 Star Trek is far from being my favourite 1960s science fiction TV series. It had its great moments but it had some excruciating moments as well. For me the problem was never the occasional campiness. That doesn’t bother me. My problem was with the heavy-handed messaging in so many of the scripts. At times it was even more heavy-handed than The Twilight Zone which is saying something. There was also often a bit too much obviousness in the scripts. In season three the great moments were becoming progressively rarer.

That Which Survives is a late season three episode which is a mixture of good and bad. The best news is that it’s entirely free of social messages. The bad news is that the story is not exactly dazzlingly original.

The Enterprise arrives at a planet which is very puzzling indeed. It appears to be only a few thousand years old but there is life on the surface. Complex life could not possibly have evolved in such a short time but there it is. As Kirk and three others are about to be transported to the planet surface a strange woman appears in the transporter room. She touches one of the technicians and he dies instantly. 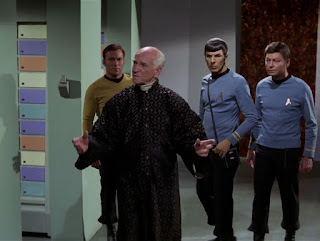 The explanation when it comes might not be very original but there is one interesting twist regarding the woman’s motivations.

Lee Meriwether plays the murderous woman, Losira, and does a decent enough job. Her makeup is rather startling.

William Shatner gets to do some overacting, which is always good. Spock is particularly Spock-like in this episode while engineering officer Mr Scott (James Doohan) is ever more Scottish than usual.

That Which Survives works pretty well. It’s entertaining and it has none of the irritating ingredients that mar so many episodes. I recommend this one.

All Our Yesterdays was the second last episode of Star Trek, and it proves that even at this very late stage the series could still come up with a truly excellent story. It’s a time travel story with some nice twists. What’s particularly satisfying is that the twists are emotional twists as well as science fictional ones.

The Enterprise arrives just in time to rescue the inhabitants of a planet. Their sun is about to go supernova. Kirk, Spock and McCoy beam down and find to their surprise that everyone has gone, except for the ageing librarian. He is however more than a librarian.

Where have the planet’s inhabitants gone? It ties out that they’ve escaped into the past. Not in their imaginations but in reality. The librarian, Atoz, has invented a machine that can send them back to any period in the planet’s history. There is one little catch, which I’m not going to reveal.

The machine accidentally sends Kirk back to a time roughly similar to Europe in the 17th century. The fact that it looks more like a period in Earth’s history than in an alien planet’s history doesn’t affect the story. Kirk finds himself accused of witchcraft and finds out about the catch I mentioned earlier. Spock and McCoy are accidentally sent back to the Ice Age where they encounter the beautiful Zarabeth (Mariette Hartley). Amusingly, when she takes them back to her cave and removes her furs she’s wearing an incredibly skimpy costume underneath. This doesn’t make much sense except that hey, she’s really hot and she looks good wearing very little clothing and that can’t hurt the ratings. 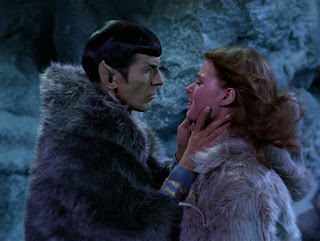 Spock reacts very strangely to all this. It’s not just that he seems to be falling in love with Zarabeth, which is startling enough, but his behaviour is odd in other ways. What’s really neat is that the plot gives us a plausible and entirely satisfying explanation for his behaviour, an explanation I’m also not going to reveal.

There’s also a race against time element (that sun is going to blow at any minute) which adds some suspense.

Leonard Nimoy gets a chance to do some real acting as well and he’s able to make Spock’s personality aberration seem convincing.

This is a script (by Jean Lisette Aroeste) that ties all its threads, scientific and emotional, together very neatly and very cleverly. OK, by the halfway point you can see how it’s going to end but that’s not a flaw since it increases the emotional impact.

The time travel stuff is naturally pure technobabble but what matters is that at least it sounds like it makes sense (which is more than can be said for a lot of TV sci-fi) and all the implications have been clearly thought out.

All Our Yesterdays manages to be an original and surprisingly coherent time travel story, a story with some emotional depth and fine entertainment. This is the kind of episode that almost persuades me to forgive Star Trek for the disappointments of so many other episodes. It has a very effective ending too. This one is highly recommended.

An episode of Star Trek with a political subtext is no surprise. There are countless such episodes. But The Cloud Minders is something different. The social message here is not a liberal one. This one is pure Marxist class struggle stuff. 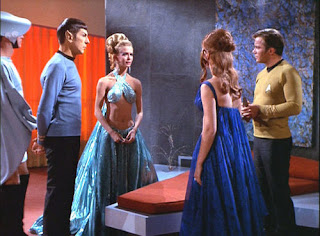 The Enterprise has to pick up some ore from the planet Ardana. The ore is desperately needed to fight a botanical plague on another planet. Ardana is a rigidly divided society. On the planet surface (or rather below the surface since their main function is to mine the ore) are the Troglytes. They’re the oppressed workers. The members of the ruling class live in Stratos City, a city that floats in the clouds. They devote their lives to art and intellectual pursuits. They do no actual work. Their idyllic lifestyle is made possible by the labours of the Troglytes. And now the Troglytes are rebelling against their appalling working conditions.

What’s really interesting is that the ruling class are not an old-fashioned aristocracy nor are they quite a capitalist class. They are an intellectual/artistic class. They live lives devoted to art and philosophy. Those lives are of course based on exploitation.

The Stratos City dwellers pride themselves on the fact that Stratos City is entirely free from violence, while the Troglytes are violent and dangerous. In fact Kirk, Spock and McCoy (who have beamed down to Stratos City) will soon discover that the city dwellers are quite happy to use torture on Troglytes.

Kirk is naturally determined to end this injustice even if it means violating his orders and interfering with the government of Ardana.

The story develops in a somewhat contrived manner. This is not exactly a subtle story, but Star Trek was never renowned for its subtlety. It’s still a reasonably OK episode.
Posted by dfordoom at 00:19