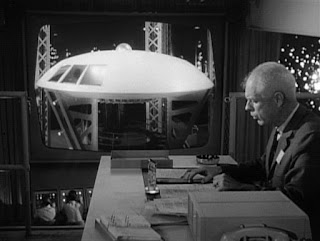 No Place to Hide is the unaired 1965 pilot episode of Lost in Space and it provides a fascinating look at the original concepts behind the show. It differs from the first episode of season one (The Reluctant Stowaway) in many ways, some obvious and others more subtle but no less important.

The basic premise, that the Robinsons are to be the first family sent into deep space to begin the task of him colonisation, is the same. There is however a voiceover narration in the early part of the episode (it’s actually supposed to be the voice of a controller at Alpha Control) which explains a lot of details that The Reluctant Stowaway glosses over and adds information that gives the mission a slightly different character. The spaceship is named the Gemini 12 rather than the Jupiter 2.

The most obvious difference is that there’s no robot and no Dr Smith. It soon becomes clear why it was so vital to add Dr Smith to the cast. He was so incredibly useful in plot terms - he could always be relied upon to lose or break some piece of vital equipment or cause some other problem that would put everyone in danger and thereby create the necessary dramas. And of course in The Reluctant Stowaway it’s the extra weight he adds to the spaceship by stowing away that causes them to become lost. In No Place to Hide the Gemini 12 runs into a meteor storm that damages the ship and sends them wildly off course.

It’s also interesting that in The Reluctant Stowaway the Robinsons seem to be a typical American family chosen more or less at random, with John Robinson and Don West seeming to be the only qualified members of the crew. In No Place to Hide they’re all incredibly highly qualified experts in a variety of vital fields. Don West is Dr West rather than Major West and he’s a genius scientist. John and Maureen Robinson are also both genius scientists. Even Penny is a zoologist, and Will is a scientific prodigy. The one odd exception is poor Judy - she’s an aspiring musical comedy star! 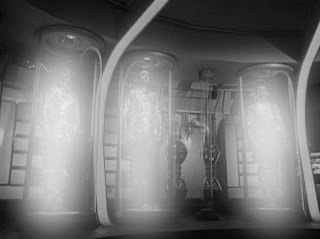 The Gemini 12 crash lands on an unknown planet. Within six months they have established a base camp and they’re growing food and domesticating animals. Then things start to go wrong and they’re plunged into a series of dangerous adventures. Some of these adventures would be recycled for use in early season one episodes.

Most of the characters are pretty much the same. Despite their impressive scientific qualifications they do not, with the exception of John Robinson and Don West, appear to do anything scientifically impressive (although of course it could be assumed that Maureen and Penny are making their contributions in the areas of food cultivation and animal husbandry).

The overall tone is fairly serious. Of course the tone of the first half dozen or so episodes of the first season is also fairly serious compared to later episodes but without Dr Smith and the robot there are no actual comedy moments at all in No Place to Hide.

There’s at least a token effort to establish a romantic relationship between Don and Judy. Since No Place to Hide takes itself rather seriously it’s likely that the original idea had been to aim at a wider audience rather than specifically a juvenile audience so it’s possible that the intention had been to develop this romance angle a bit more fully. One of the minor problems with the series was that with the lack of focus on this romantic pairing Judy ended up being a character without any really defined rôle.

I don’t recall there being so much emphasis in The Reluctant Stowaway on the idea that if the mission had gone as planned the Robinsons would have spent 98 years in suspended animation before reaching their destination. 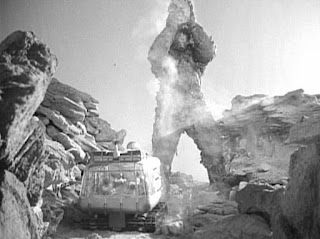 The spacecraft-in-flight special effects are a bit iffy, especially during the meteor storm, but they're not noticeably worse than those to be found in other television science fiction series of that era. On the other hand some of the other effects are quite decent and it’s obvious that some serious money was spent here. Overall it’s visually quite impressive by 1960s television standards. The inland sea sequences are thrilling and very well done with some fine miniatures work.

No Place to Hide is most definitely worth watching if you’re a dedicated Lost in Space fan or an Irwin Allen fan. Like the first few first season episodes it offers a tantalising hint of some of the directions in which the series might have gone.  It seems fairly clear that when this pilot was made the intention was that Lost in Space would be a real relatively grown-up science fiction series that would appeal to a wide audience. Watching the pilot you can see why changes had to be made but you can also understood why it was picked up as a series.

No Place to Hide is included as an extra in the season one volume two DVD boxed set (or at least it's included in the Region 4 edition). I have no idea if it's also included in the more recent complete series releases on DVD and Blu-Ray.

I reviewed the early relatively serious season one Lost in Space episodes a few years back. That post can be found here.