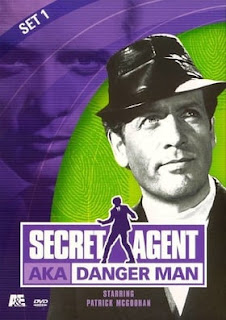 Danger Man had a reasonably successful run as a half-hour spy drama series in 1960-61 and was revived, even more successfully, as a one-hour series which ran from 1964 to 1967. The title was unchanged in Britain but for some obscure reason it was given the incredibly dull title Secret Agent in the United States. Danger Man remains one of the most influential of all television spy series, and certainly one of the most interesting.

The reason it’s so interesting is that almost everything about this series is slightly ambiguous. The first layer of ambiguity of course is the matter of whether it’s actually the same series as the 1960 version and whether the hero is the same man. As with almost everything to do with Danger Man the ambiguities can never be entirely resolved. In the 1960 incarnation John Drake is an agent for an unnamed (and mythical) NATO intelligence  agency. In the 1964 version he works for an equally mythical British intelligence agency (M9). It is of course quite possible that he always was a British agent but that he had formerly been seconded to NATO.

The second layer of ambiguity is John Drake’s nationality. In the 1960 version his nationality is never explicitly stated but he seems most likely to be American. In the 1964 version he must presumably be a British subject since he’s working for British intelligence.  Again this does not necessarily mean he’s not the same man. He could easily be an Englishman who lived for many years in America, or he could be American-born but with British citizenship. The ambiguity is enhanced by Patrick McGoohan’s own ambiguous nationality - he was an American-born Irishman who was raised mostly in Ireland but spent his early career in Britain and he had a genuine transatlantic accent which he could tweak slightly to sound vaguely English, vaguely American or vaguely Irish.

There’s also a certain class ambiguity. John Drake is educated and cultured but somehow he is not quite a gentleman. There is a suggestion that he is a bit of a class outsider. His superiors (in the 1964 Danger Man) are mostly upper-class Englishmen but we get a definite sense that neither they nor Drake himself consider him to be a gentleman. On the other hand he is clearly not working class. 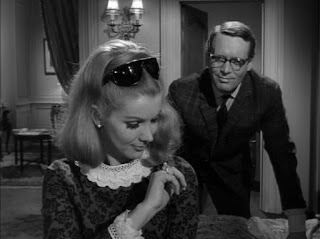 The series itself is slightly ambiguous. On the whole it belongs to the realist school of spy fiction. It has the touches of cynicism and moral ambiguity common to that school, and Drake is the kind of hero usually associated with that school - he has definite moral qualms about many of the things he has to do. On the other hand it avoids the full-blown cynicism and nihilism generally associated with realist spy fiction (writers like Greene, Ambler, le Carre and Deighton) and realist TV spy dramas like Callan and the very underrated Man in a Suitcase. It has touches of humour (for all its many virtues there are no laughs in Callan) and even on occasion touches of whimsy. The storylines are mostly of the realist type but occasionally the series ventures into more fantastic plots. Overall it’s a serious spy drama but it avoids wallowing in existential despair or bleakness.

While there are plenty of Cold War-themed episodes the Cold War is not the sole focus (perhaps not even the main focus). M9 seems to be equally concerned with trying to preserve the tattered remnants of British prestige and influence. In fact this is the dominant theme in a great deal of postwar British spy fiction, especially le Carre and Ian Fleming’s Bond novels - an attempt to deal with the appalling shock of realisation that Britain was no longer a major power. Many of Drake’s missions are attempts to keep pro-British regimes in power in the Third World or to protect Britain’s rapidly declining economic influence, or to prevent the process of abandoning the empire from degenerating into a complete shambles. Mostly it’s not the fate of the Free World that is at stake.

There are many interesting things about this series but the most interesting of all is the character of John Drake (and Patrick McGoohan’s portrayal of Drake). John Drake is the anti-Bond. He hates using guns. And when it comes to women he’s an old-fashioned gentleman. There’s no sex and no graphic violence, largely due to McGoohan’s religious beliefs (he was a devout Catholic). Drake is a moral spy. Which is of course an impossibility - being a spy is all about lying, cheating and manipulating people. Drake is no fool. He understands this. But he still tries his best to be a moral spy. 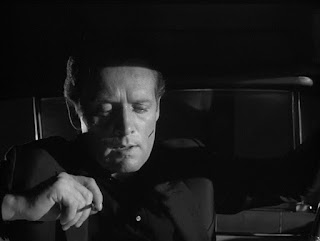 That doesn’t mean that there’s any lack of action. There are very few gunfights but lots of fistfights. It’s an exciting action series, but compared to other spy series there are comparatively few fatalities. Which actually makes Danger Man more realistic than most spy dramas - in real life spies very rarely kill each other (or at least they very rarely killed each other during the Cold War).

So how does the 1964 reinvention of Danger Man stack up against the 1960 original? There are the slight differences alluded to earlier but on the whole both the formula and the feel remain unchanged. The hour-long format offered writers more scope but on the other hand the half-hour format tended to produce fast-paced punchy television. Production values are high in both series. McGoohan’s performance is pretty much identical in both series. Both versions have their virtues and I personally wouldn’t care to express a preference for one over the other.

The whole season is extremely good but there are a few definite highlights.

In You're Not in Any Trouble, Are You? Drake is up against an organisation of professional killers. He gets some help from a girl named Lena. He doesn’t need her help and he doesn’t want it but she’s determined to help him anyway and she’s a terribly nice girl and he can’t bring himself to hurt her feelings. The always delightful Susan Hampshire guest stars as Lena (and she pops up another episode later in the season).

Sting in the Tail also benefits from a great guest starring performance. This time it’s Derren Nesbitt as a very charming but very deadly Middle Eastern assassin named Noureddine. The battle of wits, and wills, between Drake and Noureddine is the highlight.

To Our Best Friend is one of a number of episodes in Which Drake really hates having to do his job. He has to investigate a suspected double agent who happens to be one of his oldest friends. There are several layers of divided loyalties and betrayals in this excellent story. 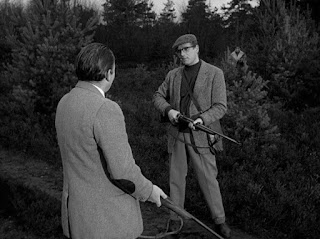 In The Hunting Party Drake goes undercover as a butler. It’s another possible security leak but this one is almost inexplicable. The only clue is that a wealthy English couple living in France, Basil and Claudia Jordan, seem to be a common factor in a number of leaks. It’s a clever if slightly far-fetched plot of a type that was very popular at the time but the main attractions is the deadly battle of wits between Basil (played with great style by Denholm Elliott) and Drake. And it’s the sort of scenario that McGoohan really relished as an actor. The toy car race is a superb touch.

Two Birds with One Bullet is a good but not a great episode but it’s notable for the murkiness of the politics, with British Intelligence trying to save the leader of a moderate revolutionary party because the party’s existence provides a useful outlet for opposition that might otherwise be directed in more dangerous directions.

I Am Afraid You Have the Wrong Number is another perhaps not outstanding but very solid episode that is noteworthy for the number of gadgets Drake uses, and for Drake behaving like a bit of a one-man army. He is investigating the death of a British agent in Geneva but is the agent really dead? he agent is named Standfast, a nice nod to John Buchan's classic spy thriller Mr Standfast.

The Man with the Foot starts with an operation that goes wrong in the course of which  Drake’s cover is blown. He is sent on leave and decides that Spain might be nice at this time of year. An odd decision since it’s the middle of winter. He stays in a small hotel in the Pyrenees. He is the only guest, until Monckton turns up. It doesn’t take Monckton long to conclude that Drake is a spy. It doesn’t take Drake long to reach the same conclusion about Monckton. They’re both right. They are both spies. But what on earth is it that Drake is up to? His behaviour is such that any self-respecting spy observing him would be justified in thinking that he was up to something incredibly important and incredibly secret and the viewer will be thinking the same thing. But there’s an odd clever little twist to this one. 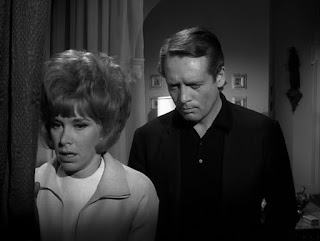 Robert Urquhart is great fun as Monckton plus we get Bernard Lee as well in the guest cast. It’s an offbeat slightly quirky episode but it’s surprisingly successful.

In The Paper Chase the First Secretary at the British Embassy in Rome has had some papers stolen from his car. Since the papers were top-secret and he was not even supposed to take them out of the Embassy he’s going to be in big trouble. So he asks his old friend John Drake for help. It’s Saturday. Drake’s task is to retrieve those papers and he has to do it before Monday morning. Unfortunately the chase for those papers turns out to be remarkably complicated since they have already changed hands several times. It’s a tense and moody episode and then right at the end - well let’s just say the ending is somewhat bizarre and unexpected. An enjoyable episode just the same.

Pirate radio stations were a big thing in the 60s and in Not So Jolly Roger Drake goes undercover as a DJ on Radio Jolly Roger, broadcasting from what looks like an oil rig just outside the three-mile limit. In fact it’s apparently some kind of wartime maritime fort - in any case it’s a fantastic location. He’s taking over from the previous DJ who met with a very unfortunate accident. It seems that Radio Jolly Roger isn’t just broadcasting the lates pop hits, it’s also broadcasting signals to enemy submarines. The setting gives this highly entertaining and stylish story a slight hint of the surreal.

At the time it seemed like a bold move for Patrick McGoohan to leave Danger Man to make his ground-breaking very ambitious very experimental series The Prisoner. In retrospect The Prisoner has not dated all that well. It’s still interesting but its flaws (particularly its self-indulgence) are all too evident. Danger Man by contrast now seems like much the more successful series.

Danger Man is one of the great TV spy series. Very highly recommended.
Posted by dfordoom at 03:42