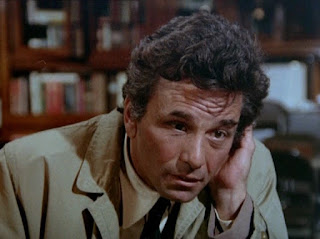 The Bye-Bye Sky High I.Q. Murder Case was the third and final instalment of the truncated sixth season of Columbo. It went to air in May 1977.

As the title suggests this is a very light-hearted Columbo mystery. It’s a case of murder at the Sigma Club. The Sigma Club is a kind of social club for very high I.Q. people. The joke is that they’re all hopeless misfits and totally socially inept. They have nothing in common and don’t seem to like each other very much but without the Sigma Club they’d have no social lives at all.

Two of the members of the club are partners in a very large accounting firm. One of them, Oliver Brandt (Theodore Bikel) has been embezzling funds. The other, Bertie Hastings, has discovered the embezzlement so naturally he has to be murdered. These are of course not spoilers since, as in every Columbo episode, we know the identity of the killer right from the start. The murder method is the sort of thing that a very intelligent but very arrogant person might come up with - it’s incredibly ingenious but ludicrously over-complicated. It does involve some wonderful contraptions though.

As usual we get a battle of wits between the murderer and Columbo but the irony is that despite the killer’s high I.Q. we never believe he has a chance of winning - it just never occurs to him that policemen might actually know their jobs. 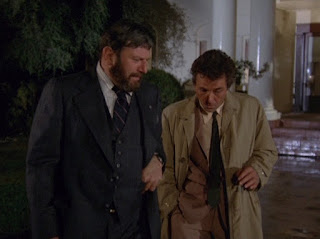 Much of the fun comes from the other members of the club who come up with their own theories to explain the murder. They naturally assume that a mere policeman could never solve such a difficult case and it’s amusing to see their discomfiture when Columbo has to break it to them gently that their theories have already been thought of by the police and dismissed as unworkable.

In this episode Peter Falk doesn’t have a major star to play off but Theodore Bikel does a fine job. His gradual psychological unravelling is so convincing that we feel kind of sorry for him.

Kenneth Mars is surprisingly restrained and doesn’t get very much to do which is a pity since his character, a welder with a genius-level I.Q., might have had potential.

Samantha Eggar is very good as Brandt’s wife, a woman who just assumes her husband will provide her with unlimited spending money and seems genuinely puzzled when he blames her for the mess he’s in. It’s impossible to conceive of a more shallow and selfish woman but what makes this performance interesting is that she is entirely unaware of her character flaws. She’s not conniving or deceitful or vindictive - she’s more like someone who simply hasn’t developed any adult emotions. She’s actually more interesting than the murderer. 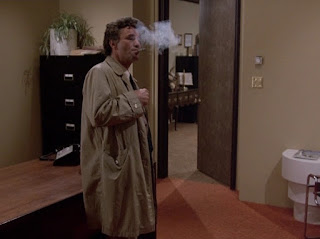 Look out for Jamie Lee Curtis in a small but amusing part as a waitress. Carol Jones is excellent as a geeky 14-year-old girl genius. The two bitchy male secretaries are fun also.

The ending is perhaps a bit contrived.

This is not perhaps a Columbo episode of the first rank but it’s sufficiently witty and amusing that its minor flaws can be overlooked. Recommended.

It’s hard to make a judgment on the sixth season as a whole since there were only three episodes. The DVD release, quite reasonably, combines the sixth and seventh seasons in a single boxed set.