Perry Mason - The Case of the Buried Clock (TV mini-review) 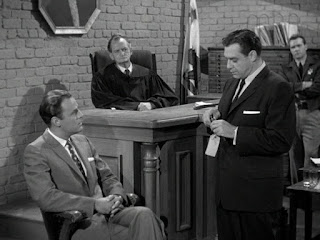 My current project is to pick the episodes of the 1957-66 Perry Mason TV series that are actually based on Erle Stanley Gardner’s novels and read the novel, then watch the TV episode and do parallel reviews of both the novel and the TV episode. My review of Gardner’s novel The Case of the Buried Clock can be found here at Vintage Pop Fictions.

The Case of the Buried Clock is a 1943 Perry Mason novel, with a typically delightfully convoluted plot. Of course if you’re going to adapt a novel into a one-hour TV drama you’re going to have to streamline the plot a good deal. Unfortunately that means eliminating some fascinating plot elements. Francis M. Cockrell’s script eliminates a lot of the best things in the novel (the sidereal time thing, the missing bullet, the interesting stuff about the murder weapon, most of the cross-examination fun). What I miss most of all from the book is the epic battle of wits between Mason and Deputy D.A. McNair. In fact the only thing it keeps is the central element in the eventual solution.

Lots of characters are eliminated. Even key suspects are eliminated! That’s understandable. There’s so much misdirection in the novel but to retain all of it would have made the teleplay hopelessly complicated and difficult to follow. A lot of incidents that all contribute to the plot are comprised into a smaller number of manageable incidents.

In the TV version Dr Blane has discovered that his son-in-law has been embezzling money from the family bank and now he’s turned to blackmail. When the son-in-law turns up dead the police draw the logical conclusions. There’s a clever unbreakable alibi element. The solution to the crime does seem to be pulled out of a hat - in the novel we’re more thoroughly prepared for it so the twist is more satisfying. 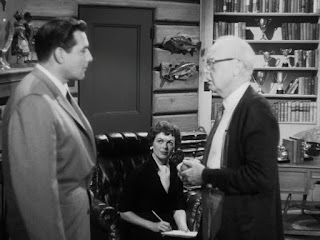 And in the TV drama the clock seems like too much of a gimmick rather than an integrate part of an ingenious story.

The Dr Blane of the television version is actually an amalgam of two of the key characters in the novel, which is probably a necessary change but it does make him a slightly puzzling and contradictory character. Is he a banker or a doctor? He’s both, but in Gardner's novel the banker and the doctor are two entirely separate characters.

Watching this episode I can understand why after the first season the producers turned more and more to original teleplays rather than adaptations of the novels. The episodes based directly on the novels usually compare unfavourably to the source material while the original stories tend to work much more effectively. When you try to compress a novel into a single hour of television there’s someways the danger that the major plot twists will come as too much of a surprise.

The Perry Mason novels and the TV series are in my view equally good (and both are very good indeed) but the TV series is best enjoyed as a series inspired by the novels rather than as an attempt at straightforward adaptation.

The TV version of The Case of the Buried Clock is definitely worth a look but you’ll like it more if you don’t read the book first.
Posted by dfordoom at 06:01