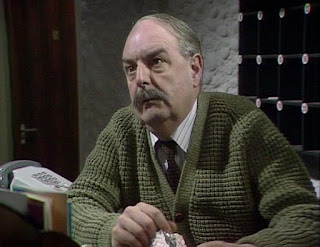 Murder Motel closed out season five in reasonably good style. Michael Spencer (Ralph Bates) is under suspicion for embezzlement so he and his sister Helen (Anne Rutter) decide to set a trap for the real criminal. Unfortunately they’ve chosen the Woodheath Motel as the trap and people who check in to this motel have a nasty habit of never being seen again.

Michael’s fiancée Kathy (Robyn Millan) decides to play amateur sleuth but she has no idea what she is getting into.

There’s lots of mayhem in this episode. The gruesomeness is almost entirely implied rather than explicit but there’s a prodigious body count. The villains are colourful and sinister with the chief villain being a most amusing and jovial monster.

I particularly liked Robyn Millan’s bizarre performance as the heroine. This being an ITC series and given Lew Grade’s obsession that using American actors would magically unlock the U.S. market most episodes feature an American star. Star is perhaps not the right word. These are mostly not has-beens but never-were stars, and most of those featured in Thriller were pretty forgettable.

But Robyn Millan makes Kathy an oddly appealing heroine. She’s a ditzy blonde and as an amateur detective she doesn’t have the slightest idea what she’s doing. But despite this she has a kind of steely determination which is probably mostly the result of her inability to comprehend the dangers of her situation. If something bad has happened to her boyfriend she’s not going to give up until she uncovers the truth and she doesn’t care how much danger she’s putting herself in. She should be no threat to the villains at all, but her very amateurishness works in her favour. 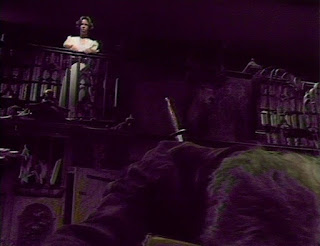 An entertaining tale with some genuine scares and a satisfying conclusion.

Sleepwalker kicks off the sixth and final season. Katey Summers has nightmares and walks in her sleep. Maybe it has something to do with the books her father writes - books on witchcraft and similar subjects.

Katey has been having a recurrent nightmare about a hidden room and an old man with a knife in his back. The house that her father has rented is actually very old and supposedly does contain secret passageways and concealed rooms. Of course that can’t have anything to do with her nightmares - or could it? How real are her nightmares?

Of course it’s also possible that Katey is mad, but here again Clemens offers us ambiguous evidence. Katey has acquired a trainee psychiatrist boyfriend named Barnstapple and he seems to think she’s sane.

There’s a quite outrageous explanation that combines both psychological and paranormal elements and both Katey and Barnstapple are prepared to consider it. 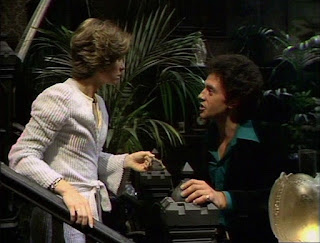 The eventual resolution includes a pretty satisfying twist. It’s a bit far-fetched but then it’s the kind of story in which all the possible solutions are equally far-fetched. In fact it’s probably the most plausible explanation and basically it works.

The special effects are of the kind that you get in 70s British television. They’re basic and a bit crude but they do work and the overall atmosphere of subtle weirdness and spookiness is pretty effective.

The Next Victim is a Woman in Peril story. While London suffers the worst heat wave on record a maniac strangler is killing women. Inspector Frampton (T.P. McKenna) is very unhappy because he’s sure this is a new killer - a man who has probably only ever committed very minor sex offences in the past but now he’s gone over the edge. He has a distinctive method of committing his murders and if he’d been active in the past the police would certainly have been aware of him. Tracking him down is going to be a lengthy and tedious business and he’ll go on killing until they do find him.

Sandy Marshall (Carroll Baker) is a wealthy and rather glamorous woman who is temporarily confined to a wheelchair following a car accident. Her husband is trying to close an important business deal and has to leave her alone for a day. So clearly we are expecting that Sandy is going to be stalked by the psycho killer. We are not disappointed. 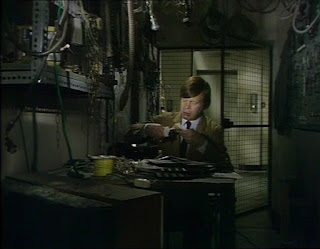 It’s all very well executed. Sandy has good reason to believe that the killer has gained entry to her apartment block and she knows she is in extreme danger but she doesn’t know where exactly the danger is going to come from or from whom. She obviously has no idea what the killer looks like so any man at all could potentially be the strangler. The tension builds remorselessly as Sandy makes minor mistakes that could cost her her life. Meanwhile Inspector Frampton and his sergeant are making agonisingly slow progress in uncovering the strangler’s identity.

There are several possible twists that Clemens could have thrown in at the end. I had a pretty good idea which twist it was going to be, but I was wrong.

The Next Victim benefits from better acting than most Thriller episodes. T.P. McKenna is always worth watching. He makes Inspector Frampton a rather appealing character - a slightly untidy and apparently rather lazy policeman but a clever one. Carroll Baker does a fine job as a woman who is terrified but determined not to give up.

Three rather different episodes but all three are actually pretty good. Even as the series was getting towards the end of its run Clemens was still producing some very entertaining scripts.
Posted by dfordoom at 02:40