Perry Mason - The Case of the Stuttering Bishop (TV episode, 1959) 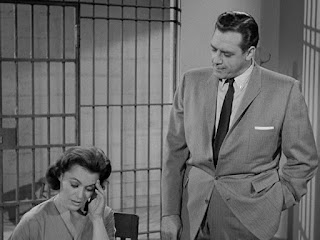 I’m pushing ahead with my project of reviewing Erle Stanley Gardner’s Perry Mason novels and the comparing them to the television adaptations from the 1957-66 TV series. In this instance it’s The Case of the Stuttering Bishop. The novel dates from 1936 while the TV version went to air in 1959 as part of the second season of the Perry Mason series.

The story concerns a rich old man who has been trying to find his grand-daughter. Having found her he’s absolutely delighted and decides to change his will to leave everything to her. The problem is that a certain bishop from Australia has also found his grand-daughter. And they’re two different young women.

The bishop and the grand-daughter he’s found, a certain Carol Delaney, consult Perry Mason. Della Street is somewhat suspicious of the bishop. He stutters, and as she explains to Perry, bishops don’t stutter.

The old man is murdered. Carol Delaney is charged with the murder.

When adapting a novel for a one-hour television episode some changes always have to be made. The plot has to be streamlined in order to be accommodated to a single hour of television. There’s no real way of avoiding this. In this case however the changes really have been sweeping. It might be more accurate to describe this as a teleplay inspired by the novel rather than an actual adaptation. 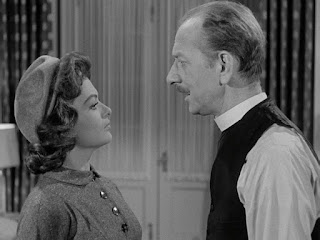 Vaguely inspired rather than inspired by the novel might be even more accurate. Almost every element in the original story has been altered and the result bears no resemblance whatsoever to Gardner’s novel. As I said, major changes are often unavoidable, but in this case all the most interesting elements of the novel are eliminated and what remains is a pretty routine story. The interesting legal points which are at the heart of the novel are also, sadly, eliminated.

The conclusion I’m slowly coming to is that the episodes that are adaptations of the novels are generally speaking much less satisfactory than the episodes that are original stories. Gardner’s plots are intricate and carefully constructed. Once you start making wholesale changes the chances that the changes will be improvements are very slim. There are a few of the adaptations that work very well, but as a general rule they’re a bit of a disappointment. The problem is that the novels are just so good.

It’s also worth pointing out that in this case they courtroom scenes dominate the episode. In the book they’re very important but they’re just part of the overall structure. Most of the really interesting parts of the novel do not take place in the courtroom. Perhaps in the TV episodes there was just a little bit too much emphasis on the courtroom scenes.

There is one thing to be grateful for. Vaughn Taylor, who plays the bishop, makes no attempt to do an Australian accent. American (and English) actors always make a frightful hash of Australian accents.

On the whole the TV version of The Case of the Stuttering Bishop is reasonably OK but if you watch it immediately after reading the novel you’ll be disappointed.

My review of the source novel can be found at Vintage Pop Fictions.
Posted by dfordoom at 19:29