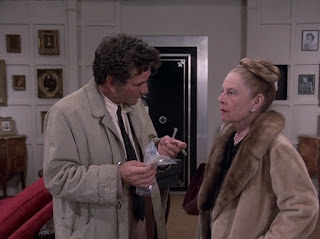 Try and Catch Me was the first episode of the seventh season of Columbo. It went to air on NBC in November 1977. And it’s a great way to kick off the season.

As usual we know the identity of the murderer right from the start. Abigail Mitchell (Ruth Gordon) is a very rich and very successful mystery writer. The only person she ever really cared about was her niece. She’s fairly sure that her niece was murdered by her husband Edmund. There was a boating accident, the body was never found and while the police were perhaps not entirely satisfied it was accepted as a case of accidental death. But Abigail wasn’t satisfied and she intends to get revenge, and she intends to get away with it. Since she’s planned thirty-two very successful fictional murders she’s confident that she can outsmart any police detective.

Her plan is, as you might expect, rather complicated. The complicated bit is setting up her alibi. She also has to bait the trap, which she does by letting Edmund know that she’s going to make him her heir. Give that Abigail is very old that means he stands to inherit a very great deal of money fairly soon. All she has to do is persuade him to walk into her safe (it’s actually a vault rather than a safe).

Another standard part of the Columbo formula is that we get to see the important clues even before Lieutenant Columbo does. Some of the clues are very straightforward. Some are quite fiendish in their obscurity and deviousness. This is a mystery that hinges on a dying clue, and this is a rather extravagant example of that particular trope. 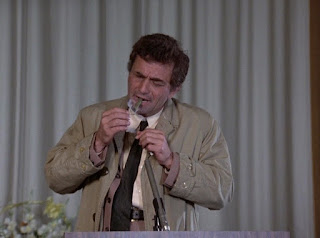 In most episodes Columbo has a pretty fair idea very early on as to the identity of the murderer and how it was done. His problem is to prove it. This one is interesting because he doesn’t figure out the dying clue until the very end. Or perhaps he does - with Columbo you can never be sure. Considering that he apparently has no actual evidence he seems very confident of getting his murderer so perhaps he actually had figured it out and was simply leading her up the garden path, which is the sort of thing he was quite capable of doing.

This series always worked best when Columbo had to engage in a battle of wits with a truly formidable adversary and Abigail Mitchell is pretty formidable. Even more to the point the series was at its absolute best when Peter Falk had a charismatic guest star. Rich Gordon was always a strange actress but she was undeniably fascinating and she and Falk make a sparkling combination.

Abigail is almost a sympathetic murderer (and Columbo did feature somewhat sympathetic killers from time to time) but there are a couple of things that count against that. For one thing, her chosen murder method was exceptionally cruel. For another, we can’t be absolutely certain that Edmund really did kill Abigail’s niece. One of the really clever things about this story is that his guilt is very strongly implied but we are never given cast-iron evidence. Abigail believes he was guilty, Columbo thinks he was probably guilty, but that’s not a sufficient justification for setting yourself up as judge, jury and executioner. This very slight doubt makes things more interesting because it highlights the crucial contrast between Abigail and Columbo - it’s not enough for Columbo to be certain in his own mind of a suspect’s guilt. He has to be able to prove it. 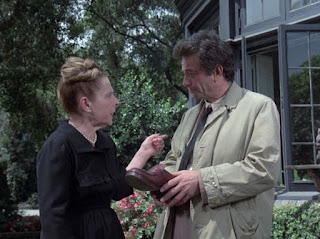 There's also a subplot involving Abigail's secretary Veronica. The subplot doesn't really go anywhere but it adds a bit of spice and uncertainty. In fact the writers are to be commended by not taking it in the obvious and much too cliché direction.

In this story we also get to see Columbo’s dog, who hadn’t put in an appearance for quite a while.

There’s the very clever dying clue, there’s the wonderful verbal sparring between Columbo and Abigail, there’s an interesting murder method. It all adds up to a superior episode. Very highly recommended.
Posted by dfordoom at 21:14