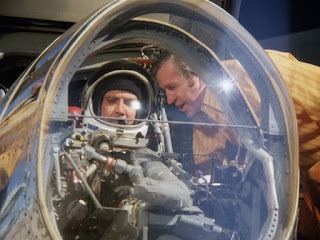 The Six Million Dollar Man was one of those television series that imprints itself on the minds of an entire generation. It actually began as three TV movies, aired in 1973. There are interesting differences between the three movies and between the movies and the subsequent hugely successful TV series.

The first of the three movies was titled The Six Million Dollar Man (and was later re-edited as a two-part episode of the series under the title The Moon and the Desert). It was based on the 1972 novel Cyborg by Martin Caidin.

This first movie has a pretty serious science fiction movie tone. It’s also, in its initial stages at least, a bit slow-moving. It does however provide a very detailed backstory for the series (although some of that backstory was in fact changed for the series).

Steve Austin (Lee Majors) is a former astronaut and is now a NASA test pilot. In the book he’s a US Air Force colonel but in this initial movie he’s a civilian. A test flight of a new experimental rocket aircraft goes horribly wrong, the aircraft crashes and Austin sustains horrendous injuries. He loses an eye, an arm and both legs. After suffering such injuries he has no wish to live and tries to commit suicide but is prevented from doing so by devoted nurse Jean Manners (Barbara Anderson). You might think that these two are going to end up falling in love, and of course you’d be right.

Top-level spook Oliver Spencer (Darren McGavin) has been waiting for something like this to happen. He works for one of those shadowy CIA-type agencies (in this case it’s called the OSO) and he has hatched a brilliant plan - to create a super-agent to carry out covert operations that would be beyond the capabilities of a normal human being. What he needs is the human raw material and the horribly mangled Steve Austin seems ideal. Spencer happens to know that Steve Austin’s friend Dr Rudy Wells (Martin Balsam) has been working on ideas for creating a human-machine hybrid - a cyborg. 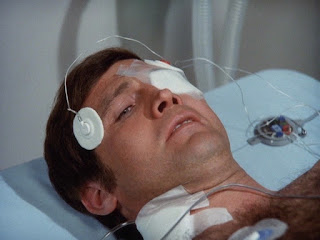 Steve Austin is not at all happy about being a cyborg, and he’s even less happy about having to work for the OSO. He’s a guy who seems quite prone to self-pity but he does have a point. He joined NASA as a civilian. He didn’t volunteer to work as a spy for the OSO and he has been manipulated. And the manipulation has only just started. As he finds out when he gets his first OSO assignment, to rescue an Arab kidnapped by terrorists.

If you’ve only seen the TV series you’re going to be a bit surprised by the cynicism of this TV movie, and by its dark and brooding tone. While there are some action scenes at the end for the most part it’s much more interested in the psychological effects of being turned into a cyborg. And the psychological effects of being manipulated by intelligence agencies with dubious ethics. This was 1973, a time when Americans were starting to view their own intelligence agencies with a fair amount of suspicion. Even network TV was starting to become cynical.

It’s Darren McGavin who is the standout performer here. He plays Spencer as a thoroughly amoral slimeball but you can’t help enjoying every second of his performance.

On the whole, despite its slowness, it’s a fairly intelligent fairly serious science fiction/spy film. Of course what’s really interesting about it is that it indicates that the original concept was very very different from what the TV series ended up being. Had they stuck to this original concept the series might have been more interesting, but would undoubtedly have been a lot less successful.

It’s still worth watching and the very fact that it’s so wildly different from the series makes it intriguing.

Universal included all three TV movies in their DVD release of the first season of the series.
Posted by dfordoom at 21:08