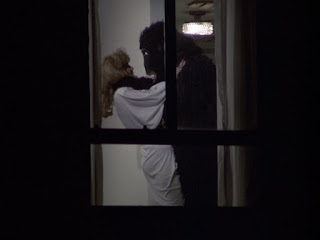 With Halloween almost upon us I thought I should watch some Halloween-themed cult TV. As it happens all I could come up on the spur of the moment was Halloween Knight, the fifth episode of the third season of Knight Rider. But it is an actual Halloween-themed episode so that’s something.

With Patricia McPherson returning to the series after being absent during season two it made sense to include at least one episode in the third season centred on her character, computer whizz-kid and genius engineer Bonnie Barstow. And this episode puts her right at the centre of the action.

Bonnie has just moved into a new apartment. It is two days before Halloween and she’s been kept awake by a noisy Halloween party in Apartment 302. From her apartment she can see straight into Apartment 302 across the courtyard and she sees something very disturbing - a woman being strangled by a guy in a gorilla suit. At least that’s what it looked like, but she’s been suffering from a fever so maybe she was hallucinating. Michael takes her story seriously anyway and decides to investigate. Especially when Bonnie sees a dead girl in her bathtub, and then the dead girl vanishes. 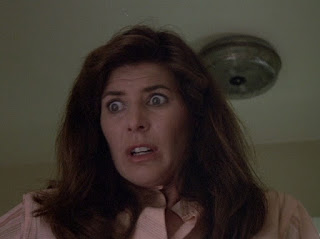 Michael gets cursed by a witch (admittedly a very pretty witch) and then someone tries to kill him. And then a gorilla tries to run him down in a car. Maybe Bonnie could have been hallucinating but Michael knows that someone really did try to kill him so he’s convinced that something sinister is going on.

The investigation leads Michael and Bonnie to a creepy old house which looks just like the Bates house from Psycho. Because it is the Bates house from Psycho, which was still there on the Universal backlot in the 80s (and as far as I know is still there today). Since Knight Rider was a Universal Television release and they had access to the Universal backlot it was a pretty obviously cool idea to use the famous house for a Halloween episode.

When you see that house you’re expecting some further Psycho references, and there are a couple. In fact given that one of the chief suspects has some movie industry connections the whole story is a bit of a movie/pop culture in-joke exercise, although it’s a thoroughly enjoyable one. 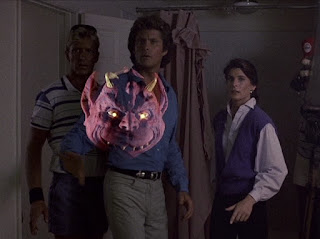 There are two spectacularly destructive KITT stunts and there’s an action finale in a drive-in theatre.

Patricia McPherson gets a rare chance to do at least a little bit of real acting.

This being Knight Rider there are of course glamorous women (not all of them witches).

All in all Halloween Knight is a great deal of fun and turned out to be a pretty good pre-Halloween viewing choice.
Posted by dfordoom at 21:44