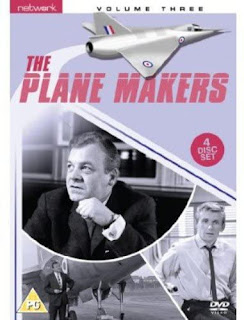 The third season of ATV’s The Plane Makers went to air in late 1964. The opening credit sequence immediately alerts us to the fact that something has changed. Instead of seeing  a Sovereign airliner being prepared for flight testing we see what is very obviously a military aircraft undergoing the same process. But Scott-Furlong, the mythical aircraft manufacturer that is the subject of the series, only makes civil aircraft. What has John Wilder been up to?

John Wilder (played by Patrick Wymark) is the hard-driving charismatic managing director of Scott-Furlong. There are a number of things that make The Plane Makers one of the best British TV series of the 1960s but the chief among them is John Wilder. Wilder could easily have been a mere caricature of the ambitious ruthless businessman who crushes anyone who gets in his way. Wilder is however much more than a caricature. His ambition and his ruthlessness are certainly monstrous but he is a man of vision and he has courage. He has made Scott-Furlong a success by taking risks. Carefully calculated risks. It’s all very well being ethical and honourable but those things don’t do you much good if your company goes broke. John Wilder does not intend for any company he controls to go broke. He believes in winning. He believes in winning for himself but he has made his company a winner as well. The people who work for Scott-Furlong are very much aware that the reason they have their jobs is that Wilder has made the company a success in a difficult and competitive field. Wilder’s methods are not always pleasant but they work.

All of which suggests that this is a series with a bit of subtlety, rather than being merely about the evils of capitalism. It certainly takes a jaundiced view of the world of big business, and the unsavoury links between big business and politics, but there is some nuance. John Wilder takes the world as he finds it. He did not invent the game but he knows how it’s played. If he didn’t take the opportunities that were offered somebody else would. And although Wilder is entirely selfish and consumed by the desire for power but it’s not as if he’s ever pretended otherwise. He can be accused of many things but hypocrisy is not one of them.

Ann Firbank plays Wilder’s wife Pamela (a rôle played in earlier seasons by Barbara Murray). Their marriage is not exactly a close one but it’s useful to both of them. Being married goes him respectability, and it gives her a very comfortable lifestyle. They both take it for granted that the other has affairs which are of no great concern as long as they’re kept discreet, although human nature being what it is there are tensions and there are jealousies. 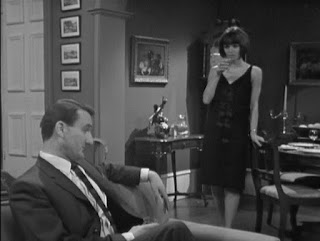 The first two seasons concentrated on intrigues within the business world. Now that Wilder is involved in the production of military aircraft the focus has shifted. Military aircraft production is all about politics. It makes no difference how good your aircraft is, success depends on political decisions. If you are to have a chance it is useful to own a few politicians. Fortunately politicians are not all that expensive to buy (they cost a good deal less than a VTOL fighter). The problem is that since politicians are available on the open market one’s rivals may own some of their own. And politicians require delicate handling since they’re of little use if they’re openly corrupt. One has to own a politician who can be relied upon to be discreetly corrupt.

When politics comes into the picture journalism inevitably follows. Journalists of course are cheaper to buy than politicians, but are even trickier to handle. When the journalist is young, female and beautiful the difficulties are increased. Especially if there’s some personal involvement, which has been known to happen between rich powerful men and ambitious beautiful women.

This was the final season of The Plane Makers but it was not the end. The story continues in the equally acclaimed follow-up series The Power Game which began airing at the end of 1965.

Empires Have to Start Somewhere explains the new opening credits. Some of the production of Scott-Furlong’s successful Sovereign airliner is sub-contracted to the Ryan aircraft company but Ryan’s has been falling behind in deliveries. Since both Scott-Furlong and Ryan belong to the same group of companies it is of course unthinkable that the penalty clause in the sub-contract could be invoke but that’s exactly what John Wilder intends to do. He has his reasons. Ryan Airframes has been developing a new VTOL fighter for the R.A.F., the company’s managing director is old and ailing and the joint managing director, David Corbett, is a whizz-kid aircraft designer who knows nothing about business. It’s obvious to Wilder that the Ryan company needs to be run by someone who understands the business side of aviation. Someone like John Wilder. And that government contract for the VTOL fighter could be worth a lot of money.

Wilder has his plans to take control of Ryan Airframes and he puts them into operation with his usual shrewdness and ruthlessness. 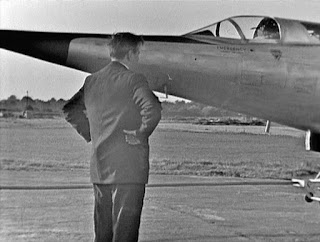 John Wilder already has power within the aviation industry but he has larger ambitions, including political ambitions. Absorbing Ryan Airframes is the first step in the creation of a business empire.

Other People Own Our Jungles Now introduces Wilder to James Cameron-Grant MP (Peter Jeffrey), a man who actually has fewer ethics than Wilder himself. Wilder wants to put the government in a position which will force them to give him that government contract for the VTOL fighter. But could Cameron-Grant be a man who can out-manoeuvre Wilder in both the political and sexual spheres? Both men have an interest in a certain Laura Challis, a journalist now employed by the bank that controls both Scott-Furlong and Ryan. Laura is young and pretty and she has a taste for powerful men.

A Lesson for Corbett sees David Corbett trying to flex his muscles. He’s still managing director of Ryan Airframes but John Wilder is now overall managing director of both companies. Corbett wants to assert his independence. Corbett wants another year of testing before the VTOL fighter goes into production and he doesn’t want Wilder to get the glory of obtaining a production contract. Corbett is trying to play the sort of political power game that Wilder plays so well but does he have the ability to play in John Wilder’s league?

Both national and international politics start to intrude more openly in The Golden Silence. The French have obtained, from perhaps slightly irregular sources, some interesting information on the British VTOL fighter. And they have come up with a startling proposal, which has been leaked to the Press. The difficulty for the British politicians is that they now have to be seen to be acting in the national interest while of course their only concerns are party politics and their own personal interests. Sir Gordon Revidge, chairman of the bank which controls both Scott-Furlong and Ryan, is playing a political game as well but his objective, as always, is to destroy John Wilder (Wilder being from his point of view a most dangerous rival). And Laura Challis, ostensibly working for Sir Gordon, is playing her own games as well.

In The Island Game the feud between John Wilder and David Corbett is hotting up. There’s a problem with the VTOL fighter which may be trivial but that won’t stop Corbett from using it. By now Corbett seems more obsessed with his power struggle with Wilder than with anything else. Chief test pilot Henry Forbes (Robert Urquhart), works manager Arthur Sugden (Reginald Marsh) and sales manager Don Henderson (Jack Watling) are having to learn to play the political game as well. 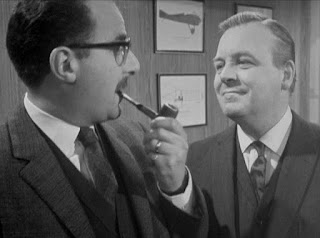 Laura Challis doesn’t need any lessons in such games and she’s in her element.

In It's a Free Country: Isn't It? Wilder comes up against the Security services and discovers that as soon as they are involved it is definitely not a free country. Even more disheartening, he discovers that when the secret police become involved almost everybody becomes a coward. An exceptionally good episode.

In A Question of Supply there are problems with the VTOL’s radar. And David Corbett comes face to face with the cowardice of civil servants and the moral corruption of politicians. Even John Wilder is easier to deal with than these people. In fact the cheerfully and shamelessly amoral Wilder is a paragon of moral virtue by comparison. Another good episode.

In The Flying Frigates it seems that John Wilder has finally gone too far. His enemies are closing in on him and they now have the means of destroying him. Or at least that’s what his enemies think. Perhaps they should be worried by the fact that he isn’t the least bit concerned. An excellent episode.

Cost overruns are causing problems in Only a Few Millions. Scott-Furlong will have to find a great deal of money very quickly but what matters is who finds the money. If Wilder finds it it strengthens his position, if Corbett and Sir Gordon Revidge find it it weakens Wilder’s position. The money matters, but prestige matters more since prestige means power. Another good episode.

In The Salesmen bureaucratic and political manoeuvring is pushing John Wilder into a corner, but that’s when he’s most dangerous. His attempt to sell the VTOL to the Australians is ruffling feathers and hose feathers are likely to be even more ruffled when Wilder is through. A good episode. 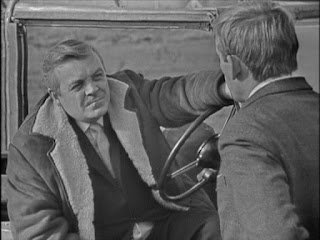 Appointment in Brussels is an odd episode, at times almost whimsical. Wilder plans to take his wife to Brussels where he has a meeting arranged. He never ever takes his wife on business trips. Sir Gordon Revidge insists that Laura Challis should go along, and Wilder thereupon decides not to take his wife after all. It sounds like a setup for a dirty weekend but although there’s plenty of sexual and even romantic tension what transpires is rather different. Laura certainly sees a different side of John Wilder, one she’d never suspected. While Laura is enjoying herself flirting she’s also trying to find out what that meeting in Brussels is all about, and that’s another of this episode’s surprises. A very untypical but very good episode.

A Hoopla of Haloes sees Corbett once again plotting while Wilder is away. The crucial question is where Wilder is and why he has suddenly dropped out of sight. Corbett has his theories and senses an opportunity. Another episode that reveals hitherto unsuspected sides of John Wilder’s personality, and another fine episode.

The Firing Line provides an unexpected but fitting ending to the series and one that neatly sets up the successor series The Power Game. John Wilder really is full of surprises, as we will see when he and Corbett have their final showdown.

The Plane Makers tackles political, sociological and psychological themes with a high degree of subtlety. The characters are complex are fascinating. The obvious comparison is to another of the great British TV series of the 60s, The Troubleshooters (which started life in 1965 as Mogul).

The Plane Makers is intelligent television and it’s also very entertaining. The third season is highly recommended (and if this series sounds like your thing then grab the complete series boxed set).