The Girl from U.N.C.L.E. - The Golden Boats of Taradata Affair (TV tie-in novel) 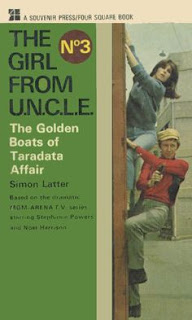 The Girl from U.N.C.L.E., a 1966-67 spin-off from The Man from U.N.C.L.E., was not a huge commercial success but it did spawn five TV tie-in novels including The Golden Boats of Taradata Affair by Simon Latter.

Simon Latter was one of the many pseudonyms used by prolific English author Reginald Alec Martin (1908-1971).

The novel has a neat setup. Two hundred years ago a pirate named Manuel Palanga established his lair on a small island which became known as Palaga. It’s now a haven for pirates of a more modern kind. Palaga is a peaceful and prosperous island paradise but its prosperity is based on activities that are not quite legal. The incredibly prolific Palaga family runs the island and does so smoothly and efficiently. And, it has to be said, very much for the benefits of the islanders.

Recently Palaga has attracted the attention of U.N.C.L.E., the international intelligence and law enforcement agency. One of U.N.C.L.E.’s top agents (and one of its most glamorous), April Dancer, has been sent to Palaga. It goes without saying that U.N.C.L.E. agent Mark Slate (who invariably partners April on assignments) is in Palaga as well, posing as a deckhand on a yacht. April is posing as one of the many rich beautiful tourists attracted to Palaga (Palaga strongly discourages non-wealthy tourists).

April’s boss Mr Waverley is particularly curious about the coracles. One of Palaga’s main exports is coracles (tiny boats). Thousands have been exported to the U.S. where they have become something of a craze. Coracle clubs have spring up across the country. What really interests Mr Waverley is that these clubs appear to be run by agents of the sinister international criminal organisation THRUSH.

The tricky part of this assignment is that there are quite a few characters who are very shady indeed but that doesn’t necessarily mean they’re THRUSH agents. The Palaga family members are often quite shady (they are the descendants of pirates and piracy is an honoured family tradition) but that doesn’t mean they have the slightest desire to see THRUSH take over their island. That could interfere with their own very benign but technically criminal activities. Of course that doesn’t mean that the Palagas are any more fond of U.N.C.L.E. than they are of THRUSH.

The plot is the sort of thing you’d expect from a typical Girl from U.N.C.L.E. episode, with a sinister conspiracy for world domination and a genius scientist who might be an evil mad scientist or just naïve and easily exploited. There are lots of gadgets and even a mini-submarine.

The plots are just as outlandish but there’s less overt silliness and no campiness.

The original idea for The Man from U.N.C.L.E. came from Ian Fleming. His idea was that the series would follow the adventures of two secret agents, a man (Napoleon Solo) and a woman (April Dancer). Fleming had a knack for coming up with cool character names! After Fleming lost interest in the series it was decided to drop the idea of a male-female pairing of super-spies but the April Dancer character was revived for the second season episode The Moonglow Affair. The character seemed to have potential and the result was the spin-off series The Girl from U.N.C.L.E. which went to air in 1966.

American television in the 1960s was very strait-laced. Books were less constrained and as a result TV tie-in books at that period often contained a lot more sex and violence than the series on which they were based. That’s true to a very limited extent of this novel. It’s certainly much more obvious in the novel that Mark Slate is not unaware of April’s feminine charms. Particularly her bottom. And there is a bit more violence compared to the TV version (although April still dislikes the idea of having to kill people).

I’ve reviewed two other Girl from U.N.C.L.E. novels, The Birds of a Feather Affair and The Global Globules Affair.

The Golden Boats of Taradata Affair isn’t quite as good but it’s still a pretty entertaining spy thriller. Recommended, and if you’re a fan of the TV series, highly recommended.
Posted by dfordoom at 07:18