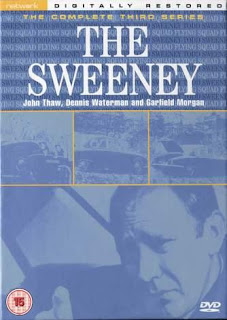 The Sweeney returned for a third season in late 1976. The series has revolutionised the British cop show and was now at the peak of its popularity and about to spawn two feature films. It blended action, toughness and humour in a way that has never since been quite equalled. It can be brutal and it can be dark but it never quite crosses the line into nihilism. Things go wrong, cases go unsolved, people get hurt, but there’s no point in wallowing in self-pity over it. When things do go wrong Regan and Carter get drunk and then the next day they’re back on the job because life goes on and the job still has to be done. And there’s still plenty of booze to be drunk and plenty of skirt to chase so why complain?

The Sweeney’s brutally realistic approach to the police shocked many people the time but audiences found it to be invigorating. Detective Inspector Jack Regan and Detective Sergeant George Carter were cops who seemed believable. They weren’t wholly admirable people but then if you’re a Boy Scout you’re not going to last very long in the Flying Squad, a squad tasked with investigating serious robberies (which generally meant violent robberies) and other crimes of violence. The criminals they deal with are usually pretty vicious.

The Flying Squad was at this time being rocked by corruption scandals and police corruption is a recurring theme. If you want to catch big-time criminals you have to spend a lot of time with those same criminals. You have to drink with them. You have to get to know them. You have to get to know which ones are prepared to act as informers. The people you have to use as informers can be serious low-lifes and thugs. It’s the only way to get the job done but the possibility of being corrupted is ever-present. This kind of honesty was also pretty startling at the time, but again audiences liked it because the series was honest about it.

The Sweeney steadfastly refuses to idealise the police but it certainly isn’t anti-police. It just accepts reality. As Graham Greene once put it, human nature isn’t black and white, it’s black and grey. 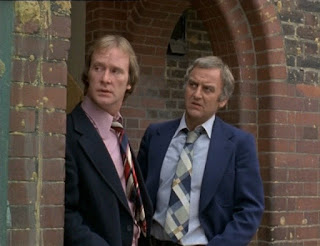 The Sweeney also manages to be incredibly stylish without being glamorous. The world of The Sweeney is seedy and sometimes sleazy, and often grimy. The people that Regan and Carter deal with can be heroic, they can be cowardly, they can be petty and vindictive, they can be kind and generous, they can be winners and they can be losers. But they all have an intensity and an immediacy to them. They feel like real people. The fact that this series is not afraid to make characters larger-than-life or absurd or eccentric makes those characters seem more believable. People really can be pretty strange. The situations can be bizarre but real life can be bizarre. This is life on the streets, for good or bad.

The fact that the series was shot almost entirely on location gives it a vibrancy that is a million miles away from the artificial world of the traditional shot-in-the-studio shot-on-video feel of previous British TV cop shows. The pursuit of realism can be a dead end if it’s done the wrong way, but The Sweeney does it the right way.

Selected Target starts the season in style. Colly Kibber, a big time villain just released from prison, is believed to be planning a big job. A very big job. First he has some some business to attend to with his former cell-mate, Titus Oates. He thinks Oates informed on him. Kibber then gives his wife her marching orders. He has a replacement for her already lined up. Or rather, two replacements, both call girls. Scotland Yard has a mammoth surveillance operation in place to foil Kibber’s plans and this is what worries Regan. He doesn’t like such mammoth operations. He’s not exactly a team player. Which story has all the trademarks of this series - plenty of violence, a bit of sleaze, crisp dialogue and a script that combines deviousness with cynicism. Excellent episode.

In from the Cold involves not just cold-blooded criminals, but very cold criminals (you’ll have to watch this one to know what I mean). Regan spots a villain named Billy Medhurst in a fish and chip shop. Medhurst was involved in a robbery a couple of years earlier in which a policeman was shot and crippled. Now he’s got Medhurst in custody but can he keep him under lock and key? And what is Medhurst’s shady lawyer up to? Not to mention Billy’s wife. It all hinges on steaks. A lot of them. A typical episode but a very good one with the usual mix of humour and violence. 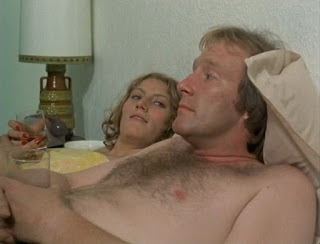 Visiting Fireman throws pretty much everything at Jack Regan. It starts with a known villain being arrested for a robbery but the villain has an alibi and it’s Regan who supplies the alibi. Which causes Jack all sorts of problems, with maybe even his career being on the line. Then Turkish policeman Captain Shebbeq arrives and wants Regan’s help on an investigation he’s conducting into long-distance lorry hijackings in Turkey. Regan and Shebbeq are old mates so you won't be surprised to hear that Shebbeq’s main interests in life are football, booze and birds. There’s a lot more to the truck hijackings than meets the eye, things that ordinary policeman shouldn’t get mixed up in. They could get killed or they could see their career go down the gurgler. This episode really does have everything. It even has Regan and Carter doing a song-and-dance routine. There’s also Helga, the very cute German barmaid at the Turkish Club. This episode is totally over-the-top but enjoyably so.

Tomorrow Man deals with cyber-crime, 1976-style. The Flying Squad think computer whizz-kid Tony Gray (John Hurt), just out of prison after serving a sentence for manslaughter after killing a woman in a traffic accident, is up to something big. They have no idea what it is since they don’t know anything about computers. Regan however finds a charming young lady named Dr Smart (yes really) from the Home Office who does understand such things. Gray’s plan is a good one and he always seems to be a step ahead of Regan and Carter who are meanwhile busily engaged in trying to figure out how to get Dr Smart into bed.

In Taste of Fear a couple of army deserters commit a particularly violent robbery. Catching them should be easy but it isn’t and DI Regan has another problem - a new sergeant on the Flying Squad, named Hargreaves. Regan has serious doubts that the man can be relied on, but he can’t be quite certain whether he’s going to have to get rid of him or not. If he does it will be the end of Hargreaves’ career. Sometimes Jack Regan hates his job.

Bad Apple presents the Squad with an unpleasant case, investigating possible corruption in a divisional CID. Regan goes undercover at the Blue Parrot club which disbelieved top be making payoffs. Haskins and Carter sift through the paperwork, looking for anomalies in prosecutions that could be pointers to the culprits. A good episode. 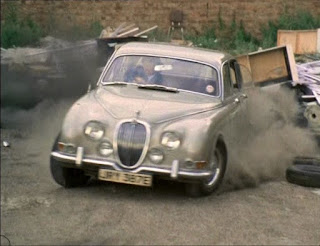 May helped Regan keep his sanity when his wife left him so he owes her and now May’s son has got himself into a spot of bother with the law. An elderly moneylender has been badly beaten and a witness puts young Davey at the spot and the police find five hundred quid hidden beneath the seat of his motorcycle. And then Davey does a runner so now he’s really in trouble and May wants Jack to get him out of it. It turns out that Davey has managed to get himself into some truly spectacular trouble and not just with the law. A very good episode.

In Sweet Smell of Succession when gang boss Joe Castle goes to his eternal reward there’s a fine collection of villains ready to take over his firm, but they’re all too greedy to coöperate and the wild card is Castle’s son Steven (Hywel Bennett). Steven seems too soft to survive in such a world but what he lacks in muscle he makes up for in low cunning. Joe Castle’s mistress Arleen (Sue Lloyd) is another wild card. She has what could be the key to Steven’s scheme. Another very good episode.

In Down to You, Brother a middle-aged retired villain has a message for Regan, but what exactly is the message? It appears to be related to a big job that was pulled six years earlier but Regan starts to suspect that the message was something quite different. One thing coppers and villains have in common is that their careers play havoc with their personal lives. Especially when a daughter is involved. A clever little story.

In Pay Off George Carter gets involved with a woman named Shirley. Shirley’s feller Eddie disappeared a year earlier and she thinks he’s dead. She persuades George to look into it.  Eddie was a very small-time villain but he may have been involved in an armed robbery which turned into an embarrassing fiasco for the Flying Squad. George’s emotional involvement causes a lot of problems for both himself and the Squad. You really don’t have much chance of having a personal life when you’re on the Squad, a lesson George is about to learn. Another very good episode. 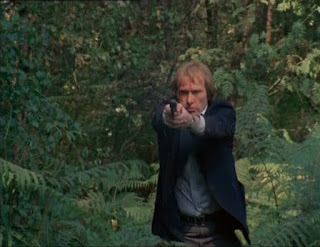 Cowboys are riding the range in Loving Arms. Well, not cowboys, but cowboy guns. Six-shooters, just like in the Old West. They’re not real, but they can shoot and they’re more dangerous than real guns. Regan stumbles across the case when a shopkeeper, an old soldier, swears blind that the Colt .45 he was held up with was real. And sooner or later someone is likely to get killed. It’s the sort of slightly offbeat story that made this series so appealing. Good stuff.

Lady Luck is the name of the episode and Jack thinks that that fickle lady has decided to smile on him. He gets some very good information from an unexpected source - an attractive middle-class housewife. Marcia Edmunds in her forties but well preserved and rather attractive which is just as well since she doesn’t want to be paid in money for the information. She wants to be paid in sex. There are two problems however. Had Jack known who she was he would have declined her kind offer. And the information hinges on an unbreakable alibi that Jack will have to break. The alibi angle is handled very well as is the very awkward situation that Jack is faced with. Much of it depends on how long it would take for Marcia’s souffle to rise. An excellent episode.

On the Run is a manhunt story which really ramps up the violence level. And the politically incorrectness level as well. A violent psychopath named Cook is sprung from custody by  his former cell-mate Pindar. Pindar is shacked up with his Rich ageing boyfriend who is besotted with him. As the net closes on Cook he becomes increasingly murderous. A violent story that keeps getting more violent but still a fine episode with which to close the third season.

This series was riding high in 1976 and it’s easy to see why. The third season has all the ingredients that made The Sweeney the most memorable cop show of its era (and possibly the best British cop show ever). The series then took a break while the two spin-off movies, the not-so-great Sweeney! and the much better Sweeney 2) were shot before returning for the fourth and final season in 1978.

The third season of The Sweeney is highly recommended.