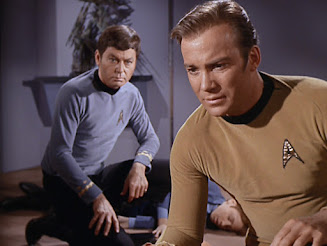 Operation - Annihilate! is the last of the twenty-nine episodes of the original Star Trek series. It was originally broadcast in April 1967. It was written by Steven W. Carabatsos.

I watched the whole of the first season a while back but for some unaccountable reason I overlooked this episode, an oversight which I am now correcting.

Mass insanity has been wiping out Federation colonies, spreading from one star system to another over the course of many years. Now it appears that it has reached the planet Deneva.

Captain Kirk has a personal stake in this - he has family on Deneva.

A team from the Enterprise beams to the planet’s surface where they are attacked by the obviously insane inhabitants. They do discover the cause of the problem - a plague of strange single-celled organisms, like dinner plate-sized amoeba. What they don’t know is how to destroy the creatures. If they cannot destroy these creatures then the mass insanity will spread to other planets, which means KIrk may have to take very drastic steps indeed to ensure that the organisms never leave the planet. Drastic steps, like nuking the entire planet and its one million inhabitants.

To make matters worse Spock has been infected. The good news is, they now know how it works. The infestation of this alien life form causes unbearable pain which results in madness. The bad news is, they have no idea how to treat the infestation without killing the patient. Being a Vulcan Spock can endure the pain, for a while at least. How long can Kirk wait before resorting to the nuclear option, which will mean Spock will have to be killed as well. And there’s a complication arising from that personal stake mentioned earlier. 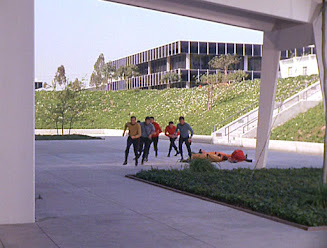 This is obviously a paranoia episode, with the threat being more frightening because it’s mindless and irrational. Paranoia had been a major ingredient of much of American pop culture in the 50s but it was mostly anti-communist paranoia. This episode represents a much more 1960s type of paranoia - the fear of the whole of society being driven mad by inexplicable forces. This actually makes Operation - Annihilate! more in tune with modern sensibilities, with people responding in fear to things that cannot be seen (such as viruses).
The feel of the Deneva colony is interesting - bright airy with ultra-modernist buildings but rather sterile. And, with all the inhabitants cowering inside and the public space deserted, it’s spooky but in a subtle sort of way. The episode makes good use of the modernist architecture which can look friendly and cheerful with plenty of people around but with no people at all it looks a bit stark and inhuman. A bit like the universe perhaps, which doesn’t seem too terrifying if we imagine it teeming with life but seems absolutely horrifying if we imagine it as devoid of life.
The basic plot was already old by 1967. It’s reasonably well executed but it works mostly because of the acting by the three leads. Leonard Nimoy does a fine job of convincing us that he’s just barely managing to hold agonising pain at bay. William Shatner does just as well, conveying Kirk’s horror at the decisions he may have to make and his exasperation at his powerlessness to find a way out with commendable subtlety. Yes, William Shatner could be subtle when he wanted to be. DeForest Kelley is good as well, portraying Dr McCoy’s appalled horror when he makes what could be a very very costly error.
There are some overly contrived elements, including the old chestnut of the ludicrously simple solution to an apparently insoluble problem.
Star Trek has often been mocked for its aliens that look just like humans with funny eyebrows but in this episode it offers us a creepily alien alien - a life form so alien that any kind of mutual comprehension is impossible. This is an alien that just destroys because it’s in its nature to destroy. Aliens that have some agenda don’t seem as scary as aliens that will destroy us without even being aware of it (again, a bit like viruses). 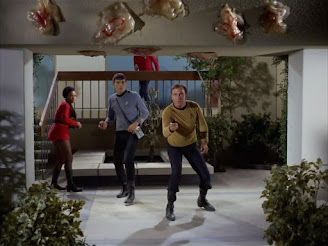 The fact that the aliens remain enigmatic is both a strength and a weakness of this story, but on the whole it’s a strength. Trying to explain the motivations of aliens inevitably makes them seem less alien because the motivations usually end up sounding human - the desire for empire, greed, the struggle for survival as a species, political domination, etc. In the case of the aliens in Operation - Annihilate! it’s not even certain that these aliens are capable of wanting anything. It’s hinted that they’re all part of a single organism but does that organism possess intelligence? Or consciousness? That question is left nicely ambiguous. What is certain is that these aliens cannot be reasoned with or negotiated with. As with viruses it’s not even possible to say for sure that they are alive in a sense that we can comprehend. They may be more like biological machines.
Perhaps they’re a kind of virus, but a virus that infects societies rather than individual creatures.
One thing this episode does do effectively is to convey the sense that the universe is likely to be a very strange place, and a hostile place - but hostile in ways that we may never understand. So a hackneyed idea is made more interesting and disturbing than we might expect.
The special effects may seem a bit crude but I don’t know how else the aliens could have been rendered. The only other option would have been not showing the aliens at all - having them be invisible like viruses. The disadvantage of that would have been to make them seem like a disease which would have made them a more familiar threat, and thus less effectively weird. On the whole I think the choices that were made in terms of showing the aliens were probably the correct ones.
The major weakness is that the personal element in the story, involving Kirk’s family on Deneva, is not developed at all and ends up being an unnecessary distraction. There are also one or two plot holes concerning the method by which the aliens travel from planet to planet.
I’m always inclined to prefer stories with genuinely weird aliens. This is an underrated episode which plays to the strengths of the series by focusing on the responses to the threat by the three main characters. Overall this one is pretty good, and an effective season finale.
Posted by dfordoom at 08:10