Kabaneri of the Iron Fortress (2016 mini-series) 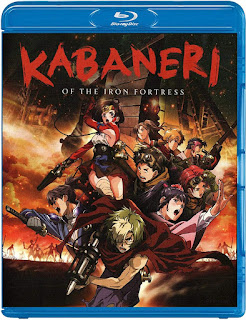 This is a bit off-topic for this blog but I thought it might be of vague interest. It is at least about cult television.

Kabaneri of the Iron Fortress is a 12-episode 2016 anime mini-series with lots of mayhem and a definite steampunk vibe.

The setting is Japan during the Tokugawa shogunate (which lasted from 1600 to 1868) but this is obviously an alternate universe. Japan has been overrun by the Kabane who are basically blood-drinking murderous zombies. If you’re bitten by a Kabane you become a Kabane. The Kabane are mindless zombies but they’re almost unkillable. There are a lot of them and unlike some zombies they can move pretty quickly.

The population has taken shelter in fortified railway stations dotted across the countryside, kept in touch with each other and with the shogun’s capital by armoured trains.

Ikoma is a young engineer was has been working on a secret weapon, a super-rifle, to defeat the Kabane. Unfortunately just as the weapon is ready for him to test it his station is overrun and Ikoma is bitten. He has three choices - he can become a mindless Kabane,  he can kill himself or he can wait until the shogun’s soldiers discover he has been bitten in which case they will kill him.

But in fact Ikoma has a third choice. It’s a long shot but it just might work. The Kabane are the product of a kind of virus. If he can stop the virus from entering his brain he may have a chance. The long shot comes off, in a way. He is not a Kabane. But he is also no longer human. He is both, and neither. He is a Kabaneri. What this will really mean for him is something he is yet to discover, and that essentially is the core of this series.

The survivors of Ikoma’s station have taken refuge on one of the armoured trains. To reach safety they will have to run the gauntlet of the Kababe. Ikoma can help them to survive, but of course they don’t want his help. They believe he is a Kabane. 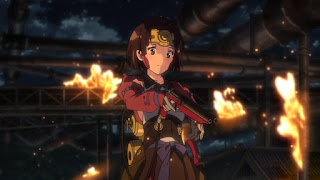 Ayame is a kind of princess, the daughter of one of the most powerful men in the country. Her social position makes her the commander of the train. Fortunately she’s wise and resourceful but taking charge of hundreds of terrified people who are ready to lash out at any perceived danger will be a challenge.

His other ally is Mumei. She’s a typical teenage girl apart from her superhuman strength and fighting ability the source of which is at first a mystery but of course we will soon find out she is a Kabaneri as well.

The salvation of everybody is in the hands of Ikoma and Mumei and it’s just as well they’re on the side of good. Except for one small detail. They do from time to time have an overwhelming urge to gorge themselves on human blood.

So this is both a zombie and a type of vampire tale.

The technology is 19th century although the trains seem just a little advanced for the Tokugawa shogunate period (which ended in 1868). They seem early 20th century. And there are one or two other items that are moderately high-tech for the 19th century. But this is steampunk so a few minor anachronisms are no big deal. In fact they make steampunk fun.

The characters have some complexity. Ikoma and Mumei find that being half-human and half-Kabane is complicated, and gets more complicated. If you’re only half-human, are you really human at all? Is there any way you can have anything even approaching a normal life? Mumei has other problems to deal with, which makes the future an even more worrying prospect for her. Mumei has a dark side, and a tragic side. She’s a young girl facing challenges and conflicting loyalties that very few people would be able to deal with. 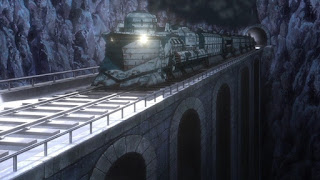 Ayame has been thrust into a leadership position for which she is too young and inexperienced. She is out of her depth. Her great strength is that she realises this. She makes mistakes but she accepts that leaders make mistakes. She is willing take responsibility for decisions she makes. Her incredibly strong sense of duty allows her to keep going when things go wrong.

The samurai Kurusu has the strengths and weaknesses of his caste. He is arrogant, stubborn and inflexible but he’s insanely brave and utterly loyal to Ayame. He hates admitting to mistakes but he has enough strength of character to do so.

Then there’s Biba, the Liberator. Mumei calls his Brother but their relationship is much more complicated. Biba is either a great Hero or a Great Villain, or perhaps he’s both.

Ayame and her followers on the armoured train face other problems aside from the terrifying hordes of Kabane. There are power plays going on at the Shogun’s court, and outside it. It’s not just humans against Kabane, but (as so often) humans against humans as well). When you have people you’re going to have factions and you’re going to have individuals lusting for power, even in a country overrun by zombies.

Both Ikoma and Mumei clearly have some kind of destiny toward which their lives are moving regardless of whether they want that destiny or not. Whether their destinies are to be tragic or hopeful - well you’ll have to watch the series to find that out. 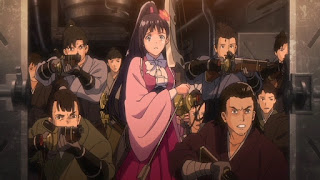 The characters in this series have to make difficult choices, choices with momentous consequences for themselves and others. There are prices to be paid for everything, and that can include paying the ultimate price. There are questions of duty and honour, and of course there is love. All of these things may be worth fighting for or even dying for.

There’s an enomous amount of violence and gore and there is some brief nudity - this is not an anime for kids.

Although made in 2016 this series has very much the look and feel of classic anime. And it has the blend of action, ideas and emotional content that you expect from classic anime.

If you’re an anime fan and/or a steampunk fan Kabaneri of the Iron Fortress is pretty satisfying entertainment. Highly recommended.
Posted by dfordoom at 04:28