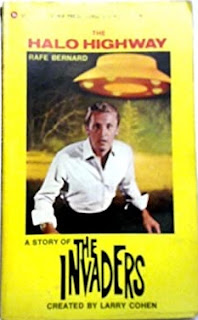 Rafe Bernard’s The Halo Highway is a 1967 TV tie-in novel based on the classic 1967-68 science fiction TV series The Invaders. The Halo Highway was the British title - the novel was also published in the US under the title Army of the Undead. It was one of eight novels based on this superb TV series.

The Invaders was one of the classic alien invasion series. On a lonely road late at night a young architect named David Vincent sees a flying saucer land. He knows that the Earth is being invaded but of course no-one will believe him. He gives up his job and devotes all his time and energy to gathering evidence that will convince the government that aliens have invaded. Just like Fox Mulder in The X-Files many years later Vincent frequently has the evidence he needs but somehow it is snatched away from him or it turns out to be too ambiguous or too fantastic to be believable. In the first season he’s a lone crusader although over the course of time and many battles with the aliens he does acquire an informal network of people who do believe him (in the second season he becomes the leader of a much more organised resistance group). It’s paranoia television at its best.

In this novel the aliens, for complicated reasons, are infiltrating the American automobile industry. They do this by arranging fatal accidents for people and then taking over their bodies. A late night telephone call from a distraught widow alerts David Vincent to the fact that something sinister is happening in Auto City.

Vincent has his usual problem - the aliens have taken on human form and to an ordinary observer they are indistinguishable from normal humans. David Vincent is however not an ordinary observer and long experience has taught him to notice the subtle clues that betray the fact that someone is an alien. The aliens are almost perfect simulacra of humans, but never quite perfect.

He quickly discovers that there are indeed a lot of aliens in the Carasel auto company and there have been an astonishing number of car accidents in the area in the recent past. Accidents which should have been fatal but weren’t. There are very few people in Auto City that Vincent can trust, but there are a few. Or at least there are a few he thinks he can trust. He’s not sure if he can foil the plans of the aliens but he intends to try.

One of the things that makes TV tie-in novels both frustrating and fascinating is that they had to be rushed out in order to be in the bookstores while the TV series on which they were based were still running. This meant that the authors in many cases had not actually had the chance to see a single episode of the series - in some cases they hadn’t even seen a final script. They based the books on what they’d been told about the series. The books often have a different tone compared to the series and there are often other significant differences since they were often based on the original concept of the series rather than on the series as they actually turned out to be when they were actually shot.

This is very evident in the case of The Halo Highway. The tone of paranoia is the same. The David Vincent of the novel is pretty similar to the TV version of David Vincent and he has the same obsessive determination. So far so good. But the way the aliens work in the novel is not at all the way they work in the TV series. It seems clear that Rafe Bernard had been given a very rough outline of the premise of the series and then added lots of ideas of his own. The idea of the aliens taking over dead people is actually more reminiscent of the way the Mysterons operate in Captain Scarlet and the Mysterons (the other great 1960s alien invasion TV series which first went to air at almost the same time as The Invaders.

Bernard has also added other elements of his own and taken ideas which which were perhaps hinted at in the series and developed them in totally different and much more extravagant ways. He’s given the aliens extraordinary powers of mental telepathy and shape-shifting abilities. He’s added a complex array of paranormal and even New Age elements - the aliens feed off mental energies and control other aliens though these mental energies. The aliens have a zombie-like quality to them.

So as a TV tie-in novel this has to be described as a bit of a failure. It has a feel that is very different from that of the TV series. On the other hand Bernard’s original ideas are quite clever and interesting. Judged as a standalone science fiction novel it’s quite intriguing. Fans of the TV series may be bitterly disappointed by the fact that the novel only bears a superficial resemblance to the series but fans may also be fascinated to see the basic framework of the series developed in such radically different ways.

You could almost describe this book as a TV tie-in novel for an alternative version of The Invaders that was never made.

If you’re looking for a novel that sticks faithfully to the premises of the TV series then you’ll want to give this one a miss. On the other hand if you’re intrigued by the idea of an author coming up with his own variation on the theme of the series you might decide it’s worth checking out - Rafe Bernard’s take on The Invaders is in its own way quite interesting.

To sum up, possibly worth a look with some significant caveats.

I’ve reviewed both season one and season two of the TV series.