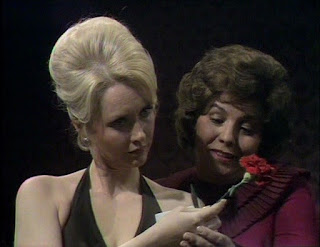 Brian Clemens’ celebrated Thriller anthology series ran from 1973 to 1976.
The general consensus is that Thriller was starting to run out of steam by the sixth season. I thought the first couple of sixth season episodes, Sleepwalker and The Next Victim (which I reviewed here) were actually not too bad.

Here are three more season six episodes, which went to air in Britain in April and May of 1976.

Nightmare for a Nightingale

Nightmare for a Nightingale concerns opera singer Anna Cartell (Susan Flannery) who has a problem with her husband. He died eleven years earlier but now he’s back and he has blackmail on his mind. Tony Risanti (Keith Baxter) was a failed singer and a failed gambler and also a failed husband and his failure to stay dead is very awkward since Anna is about to remarry. She’s going to marry a fast-rising American politician, Hal Bridie (Stuart Damon from The Champions). The scandal that Tony threatens to cause could destroy Hal’s career.

What’s really annoying about Tony is that killing him never seems to do any good. He keeps dying and he keeps coming back. Anna is starting to go to pieces because she may have been responsible for one of his deaths. Her crackup is a problem for her devoted agent Sam (Sydney Tafler) and her publicist Giles (Ronald Leigh-Hunt), especially because she won’t tell anyone why she is cracking up.

The carnations are the last straw. Tony always sent her carnations. He’s still sending them.

Anna has no idea what is going on and the script does a reasonably good job of keeping the audience guessing as well. There are several plausible possibilities. We’re also not quite sure just how serious Anna’s mental state is.

Susan Flannery is quite adequate as Anna. 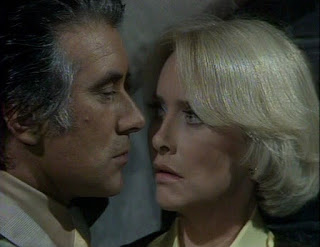 Stuart Damon (always an underrated actor) is very good as Hal, who really seems like the sort of guy Anna needs. And maybe he is. Being an American means Damon doesn’t have to bother with a fake American accent or exaggerated American mannerisms. Damon was quite capable of flamboyant acting if that’s what a particular rôle called for but here he goes for an effectively low-key performance. We’re pretty sure Hal is a nice guy but this is Thriller so of course we can’t be sure - we can’t be sure about any of the characters.

Sydney Tafler is excellent. Tafler was another underrated actor who could handle serious or comic rôles with equal facility. He plays Sam as a bit of a protective father figure. Ronald Leigh-Hunt does a good job as the cynical GiIes, a man who sees Anna as nothing more than a source of money.

Keith Baxter tries a bit too hard as Tony. Tony certainly comes across as sleazy and malevolent but a bit too much like a cheap hood from a gangster movie.

There’s plenty of paranoia, there are hints of madness and there’s some genuine menace.

It’s not one of the great Thriller episodes but it’s acceptable entertainment.

Dave Adams (Gary Collins) is an out-of-work flat broke American actor who just cannot admit that his career is going nowhere. He is running out of people from whom to borrow money. Then fate intervenes. He gets a telephone call. It’s a wrong number but it could be his lucky break. The caller is a woman who was trying to reach a psychiatrist. Helen Curry (Gemma Jones) is having terrifying dreams and thinks she’s losing her mind. 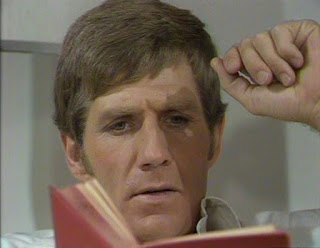 Dave decides to take a chance. He pretends to be the psychiatrist and he goes to see the woman. She is obviously rich. To Dave it is obvious that she’s just spoilt and a bit neurotic. Posing as the psychiatrist (and telling her that she’s going to need lots of consultations) means he could be on to a goldmine. And since she’s obviously just spoilt and neurotic it’s not like he’s going to be doing any real harm.

And posing as a psychiatrist is kind of fun. It’s like an acting job.

What could possibly go wrong? Plenty, as it turns out.

Initially everything goes smoothly. Dave does some quick reading up on the subject and figures there’s nothing to this psychiatry lark. It’s just so easy. And Helen actually seems to grow a bit calmer. As a bonus there’s Helen’s sister Ann who lives with her and Dave takes the opportunity to do some romancing of Ann.

Then Dave notices the hat. And starts to wonder. But he’s grown over-confident and there’s so much money to be made from fleecing Helen. He can’t just walk away from a goldmine.

The problem with this episode is that what’s really going on is very obvious. Brian Clemens wrote some great TV scripts but he wrote some lazy scripts as well, scripts that are just recyclings of old ideas without any flashes of originality. This is one of his weakest efforts.

On the plus side it’s very well executed. Even though we know what’s coming director Ian Fordyce still builds the suspense quite effectively. The secret to effective suspense is that it doesn’t matter if the audience knows exactly what’s coming next - that can even enhance the suspense if the director knows what he’s doing. Of course it helps if there are a few surprises along the way and sadly that isn’t the case here. 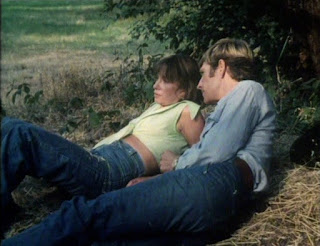 Thriller was made for ITC and Lew Grade was obsessed by the idea that every series had to have American actors. In this case it works satisfactorily since Gary Collins is absolutely perfect as the charming conman Dave. Gemma Jones gives off all the right crazy person vibes.

And there’s plenty of creepiness.

So overall it’s a lame screenplay that is to some extent redeemed by a good director and good acting. It is however a sign that Brian Clemens was starting to run seriously short on ideas.

Charlie Draper has just been released from prison and he’s pretty happy since he has the proceeds of his last robbery safely stashed away. He’s now a rich man. His happiness is however short-lived. A particularly vicious gangster named Gadder wants that money. Gadder has already killed one of Charlie’s old buddies and he doesn’t care how many more people he has to kill to get that money. Gadder likes hurting people and he likes killing people and his goons like hurting people as well.

Charlie is on the run from Gadder and the only place he can think of where he might be safe is with his brother Sammy. Sammy runs a gas station and diner in Dorset. This is where two passing American tourists, Sally and Tracy, get mixed up in the story. Along with Sammy and his wife and a drifter named Farrow they’re held hostage by Gadder and his goons who are waiting for Charlie to show up.

The police have a pretty fair idea that someone is after Charlie and they have a few leads but the question is whether Gadder will get to Charlie before the police can. 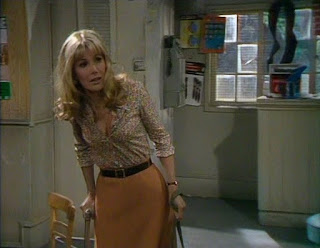 The most noteworthy thing about this episode is the cast. There’s a pre-stardom Bob Hoskins as Sammy. There’s Susan Hampshire as Sally. She was a very very big star on British television at the time and while she’s best known for costume dramas she appeared in a number of productions of interest to cult TV fans such as the very good 1962 science fiction series The Andromeda Breakthrough and the science fiction TV movie Baffled (in which she co-starred with Leonard Nimoy). There’s Dudley Sutton as Gadder. Sutton made quite a career at this time playing memorable psychopathic heavies. And there’s Gabrielle Drake from UFO as Tracy. David Daker is very good as Charlie but it’s the performance of Dudley Sutton that really stands out.

As I mentioned earlier it was customary for Thriller episodes to have at least one American star. For this episode there must have been no Americans available so somebody came up with the bright idea of having Susan Hampshire and Gabrielle Drake play Americans! Miss Hampshire keeps her American accent low-key but Miss Drake goes totally over-the-top. There is absolutely zero reason for them to be playing Americans and both actresses would have been a lot more relaxed and a lot more effective just playing Englishwomen from London taking a holiday in the country.

This is a straightforward crime thriller, with some touches of the violence and sadism that was starting to become a feature of British cop shows at this time (this episode went to air in 1976). The tone of this episode is rather reminiscent of The Sweeney, but with slower pacing, less action and a lot more suspense. The twist at the end is clever and it’s also the sort of thing that you’d expect in The Sweeney.

It’s not at all a typical Thriller episode (this is a series that very rarely dealt with professional criminals) but with a very good Brian Clemens script this time and fine direction from Robert Tronson Kill Two Birds surprisingly works very well indeed. It’s hard-edged and very suspenseful and has a nice sting in the tail.

Season six is obviously turning out to be wildly uneven. Nightmare for a Nightingale is pretty good, Dial a Deadly Number is a misfire and Kill Two Birds is excellent.
Posted by dfordoom at 00:40