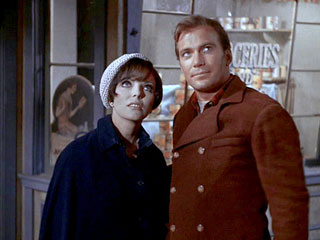 The City on the Edge of Forever is perhaps the most admired of all episodes of the original Star Trek series. It was episode 28 of the first season, was directed by Joseph Pevney and written by Harlan Ellison (although several other writers including Gene Roddenberry worked on the script). It first aired in the U.S. in April 1967.

The Enterprise has encountered a mysterious time displacement field and in a moment of confusion on the bridge Dr McCoy injects himself with a massive dose of a drug known to have drastic side-effects. And the side-effects are drastic indeed - he goes completely and homicidally crazy.

McCoy beams himself down onto the surface of a nearby planet. Kirk and Spock follow, and they find the source of the time displacement field - a time portal. MCoy hurls himself through the portal. Kirk and Spock again follow and find themselves on Earth, in the United States, in the midst of the Great Depression.

They need to get themselves some high technology to deal with their situation, which means Spock will have to build a computer from scratch using vacuum tubes and radio components.

They meet a girl. Not just any girl. This one is special. She’s special to Jim Kirk anyway. She is Edith Keeler (played by Joan Collins). Kirk is in love. Edith Keeler seems to have some mysterious connection to the time displacement field. She may in fact be the key to it. Which will live Kirk with a terrible choice to make.

This is such a well-known episode that you probably already know what happens but I’m not going to spoil it. 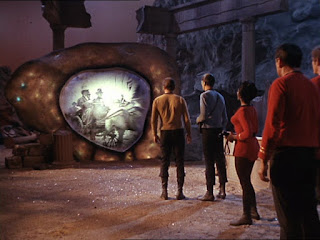 This is a story that grapples with the inherent problems of time travel such as time paradoxes and the possibility or impossibility of changing history. But there are moral complications, and emotional complications as well. The nature of these complications is revealed early because what matters is the way in which Kirk and Spock will respond to the dilemmas involved. The ideas would not have been startling to readers of science fiction in 1967 but they are more complex than you would generally expect in television science fiction of the era.

The moral and emotional quandaries involving love, death and duty are dealt with reasonably intelligenty. What I really liked is the avoidance of cheap sentimentality. That means that when the emotional punch comes it actually has more impact.

Harlan Ellison wrote the original script but major changes were made. Gene L. Coon and D.C. Fontana worked on it as did Roddenberry. Ellison wasn’t happy but it’s the sort of thing that happens in series television. Ideas that a writer thinks are great (and they may really be great ideas) are not necessarily going to work in the context of the series as a whole. Coon and Fontana were very good writers and they understood the Star Trek universe and they understood the characters. They retained Ellison’s core ideas but produced a script that worked as a Star Trek episode. The really surprising thing is that the end result is so very coherent and tightly structured.

One of the reasons it works is Joan Collins. Apart from being stunning she gives a nuanced performance. Edith is a likeable sympathetic character but she’s not perfect. She’s not quite a starry-eyed idealist but she makes decisions emotionally. Kirk is inclined to be driven by emotion as well but in his case it’s combined with a high sense of duty and an acceptance (albeit sometimes an unwilling acceptance) of reality. 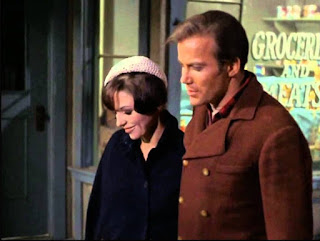 Joan Collins and William Shatner make a wonderful romantic pairing. You know they’re made for each other.

For a casual Star Trek viewer the big surprise will be Shatner’s performance - it’s so controlled. Shatner is notorious for his overacting but when Shatner overacted he did so because he wanted to and he felt that the script called for it. When he felt that subtlety was required, as it is here, he would give a subtle performance.

This is a powerful moving story with some cool ideas. Is The City on the Edge of Forever really the best ever Star Trek episode? If it isn’t, it has to be damned close.

Some minor nitpicks. It’s supposed to be 1930. McCoy tells Edith he’s senior medical officer on the USS Enterprise. She naturally thinks he means the aircraft carrier. But the aircraft carrier Enterprise was not launched until 1936. Kirk is supposed to take Edith to see a Clark Gable movie, but in 1930 Clark Gable was a complete unknown.
The City on the Edge of Forever really is a must-see. If you've only ever seen the occasional Star Trek episode and you've never understood why it has such a cult following this episode just might convert you to the faith.
Posted by dfordoom at 00:17