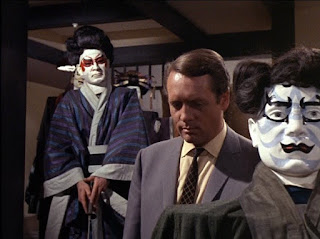 By 1967 Danger Man (or Secret Agent as it was retitled in the US) had made Patrick McGoohan the highest paid actor on British television. McGoohan however was anxious to do something more ambitious and after only two episodes of the final season were shot he persuaded Lew Grade to allow him to make The Prisoner. There are many who believe that the character McGoohan played in The Prisoner was in fact John Drake, the hero of Danger Man, and that The Prisoner is a kind of surreal coda to Danger Man.

Those final two episodes, Koroshi and Shinda Shima, were the first to be shot in colour and both were set in Japan (and captured the Japanese flavour quite well with imaginative sets and judicious use of stock footage). I don’t think it was exactly an accident that Japan was chosen as a setting. At the time the final season of Danger Man was in production the fifth Bond movie, You Only Live Twice, was about to be released and of course it was set in Japan.

In fact, to make the most out of this amazing coincidence those final two episodes were spliced together into a feature-length film under the title Koroshi.

The Bond connection is interesting since John Drake is both very Bondian and is also at the same time a kind of anti-Bond (McGoohan in fact was offered the part of Bond but turned it down because as a conservative Catholic he considered it to be morally dubious). Drake is just as cool as Bond, but MGoohan insisted that the character should only resort to violence when it was absolutely necessary and also insisted that he should not jump into bed with any of the glamorous dangerous women he encountered. 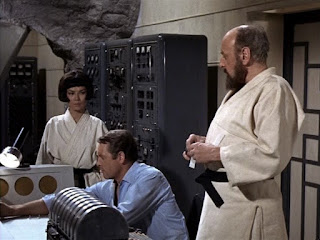 Danger Man is therefore Bond without the gratuitous sex and violence and with a more cerebral feel and a bit more cynicism and moral ambiguity (there are times when Drake is very uncomfortable with the things he had to do). Both the original 1960 half-hour series and the later one-hour series (which lasted from 1964 to 1967) manage to be some of the most intelligent and enthralling spy television ever made. With the violence kept to a minimum the series has to rely on good writing and fortunately the scripts are generally excellent and often quite complex. And of course McGoohan’s considerable acting ability (and undoubted star power) helps a great deal.

Apart from the Japanese setting the 1967 season was clearly intended to be more overtly Bondian. Bringing in Peter Yates (later to establish himself as one of the greatest action movie directors of all time with movies like Robbery and Bullitt) as a director was a pretty strong indication of this.

The fact that McGoohan bailed out after just two episodes of the final season may be an indication that he disapproved of the Bond movie feel that had started to creep in although it’s also likely that he was simply desperately anxious to get started on The Prisoner. Quitting a hit series in this manner is the sort of thing an actor would not normally get away with but Lew Grade, the boss of ITC, had immense faith in McGoohan and when Lew Grade had faith in someone he was prepared to allow them an astonishing amount of leeway. When McGoohan later moved to America he would learn a bitter lesson - US networks were nowhere near as tolerant of such things as Lew Grade.

Obviously ITC had only a fraction of the budget that a Bond movie would have had but by the standards of 1960s television Danger Man was an expensive series and these two episodes boast some very impressive sets (secret underground headquarters and that sort of thing) and very high production values. They look very slick. And of course there are lots of gadgets. 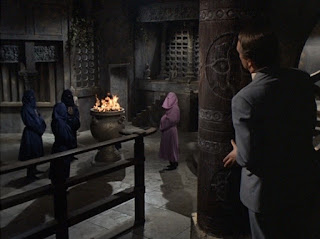 Koroshi begins with a clever murder, of a Japanese girl in Tokyo. Ako Nakamura is (or rather was) an agent with M9, the British intelligence agency for which John Drake works. Her final message was crucially important and Drake is sent to Japan to find out what happened to her. He finds that her apartment is now occupied by an English girl named Rosemary. Maybe Rosemary can help him. Maybe he can trust Rosemary. Maybe.

She does lead him to Sanders (Ronald Howard), an Englishman with a deep knowledge of and love for Japanese culture. Sanders introduces Drake to the world of kabuki. Sanders is particularly fond of the koroshi or murder scene. He loves the poetry of death. Drake will very nearly experience the poetry of death, not once but twice.

The murder (and attempted murder) scenes are imaginatively and the fight among the kabuki costumes is especially good.

Shinda Shima opens with another Bond movie reference, this time to Thunderball, with an underwater action scene. Koroshi and Shinda Shima do not exactly constitute a two-part episode but they can be considered to be linked episodes although the link is not obvious at first. And Shinda Shima is even more Bondian than Koroshi.

Drake is on the trail of Edwards, a British electronic experiment who has sold out. He hasn’t sold out to the Soviets but to an international criminal organisation. They want Edwards to break a top-secret code for them. Drake poses as Edwards to infiltrate the organisation. This episode has a diabolical criminal mastermind and a beautiful dangerous woman (played by Yôko Tani who played a lot of similar rôles at this time). 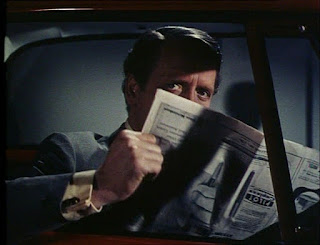 There’s plenty of action and (by Danger Man standards) lots of fight scenes. Much of Shinda Shima takes place on the tiny island of that name (it means the Murdered Island). Just the sort of island an international criminal organisation would choose as its secret headquarters.

Watching these two episodes offers us a fascinating glimpse of what Danger Man might have become has McGoohan been prepared to finish the season. It seems likely that it would not have been to McGoohan’s tastes but it might have meant Danger Man breaking through in the US in a much bigger way, possibly even to the same extent that The Avengers broke through in the same year. 1967 might have been the year that British spy series cracked the US market wide open, offering the kinds of stylish thrills that American series such as Mission: Impossible were offering but with a distinctive British flavour. In retrospect maybe Lew Grade should have tried harder to persuade McGoohan to complete the final season of Danger Man. On the other hand the 1965-66 final black-and-white season of Danger Man probably provides a better lead-in to The Prisoner so perhaps McGoohan’s instincts were right. And McGoohan may have been right in not wanting John Drake to turn into James Bond.

So Koroshi and Shinda Shima remain as tantalising glimpses of a television might-have-been. And they’re pretty entertaining as well.
Posted by dfordoom at 07:25