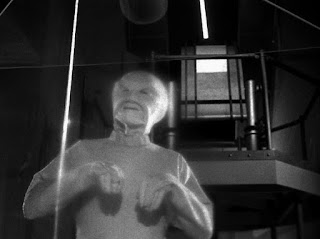 Reviews of a few more episodes from the first season of one of my all-time favourite anthology TV series, The Outer Limits.

The Outer Limits did not achieve the same level of commercial success or continuing popularity as The Twilight Zone or Alfred Hitchcock Presents and that may be partly due to the limitations of 1960s television special effects. The Outer Limits was never afraid to show the monsters but they weren’t always very convincing.

In actual fact the crudity of the special effects isn’t really a problem. The Outer Limits is really a science fiction series focused on the writing rather than the effects. And even though there were monsters the writing was focused on ideas and moral dilemmas rather than monsters and aliens.

While The Twilight Zone was often visually superior The Outer Limits has stood the test of time a lot better.

The Bellero Shield was written by Joseph Stefano and Lou Morheim and directed by John Brahm. It went to air on February 10th 1964.

Richard Bellero (Martin Landau) is a scientist working on lasers. He is also the son of fabulously wealthy industrialist Richard Bellero Sr (Neil Hamilton) and he desperately craves his father’s approval and he also hopes that when his father retires he will take over Bellero Industries. His rabidly anti-war father however fears that the lasers could be used as weapon. He is not impressed by the laser experiments and he is not impressed by his son’s choice of a wife. 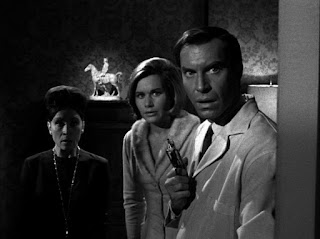 The creature seems harmless and friendly, if a bit suspicious of humans. The creature is obviously intelligent and communicating with it is no problem. Young Bellero is excited by the scientific implications but his wife Judith (Sally Kellerman) sees other possibilities - possibilities of limitless power and wealth.

Judith then decides to do something that seems very clever, if very ruthless, but in practice it isn’t so clever after all.

This episode is a science fictional version of one of Shakespeare’s more famous plays. If I tell you which one it will give away most of the details of the plot. Trying to do a Shakespearian Outer Limits episode was certainly bold but it works quite well, largely due to Sally Kellerman’s powerhouse performance.

In fact The Bellero Shield is one of the best episodes of the series. The science stuff is very dubious indeed (although quite imaginative, especially the communication through the eyes) but the science stuff is not the point of the story. This is a human tragedy in science fictional guise. It’s also an episode that demonstrates why The Outer Limits was on the whole a lot more successful than The Twilight Zone - it avoids the sentimentality and the heavy-handed moralising that so often afflicted The Twilight Zone.

The Invisibles was written by Joseph Stefano and directed by Gerd Oswald. It went to air on February 3rd 1964.

The Invisibles is inspired a bit too obviously by Robert A. Heinlein’s The Puppet Masters. Aliens that look a bit like crabs have reached the Earth and they plan to take over by having themselves implanted into humans, thus forming a kind of alien-human hybrid. The idea is to take over a lot of very important people.

Of course the aliens have human allies. Until they’re implanted into humans the aliens are almost defenceless. 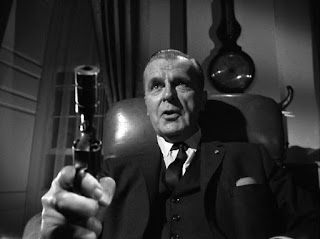 Three disreputable men, outsiders and losers, are part of the latest intake. Their task is not to be implanted with the aliens but to get close to those important people and do the implanting. Luis B. Spain (Don Gordon), Genero Planetta and Henry Castle will first be inoculated against alien implantation. The implantation does not always work entirely successfully and when it doesn’t work the results are most unfortunate.

The conspirators have lined up a job for Spain as chauffeur to a general in Washington.

The conspiracy is almost perfect, except that there is a traitor in their midst - a US Government agent.

Apart from The Puppet Masters the other obvious influence is Invasion of the Body Snatchers. Once the aliens have been implanted the alien-human hybrid looks just like a normal human. Like The Puppet Masters and Invasion of the Body Snatchers this episode can be viewed as a political allegory about communism (or about modern mass society in general).

The Invisibles might not be dazzlingly original but it’s very well executed, it’s tense and it has some definitely creepy moments. Director Gerd Oswald adds to the creepiness with some effectively disturbing low-angle shots. Joseph Stefano (the producer of the series) wrote the script. The idea of the aliens using outcasts and losers as their servants works well and adds to the paranoia - these are men who have never trusted anybody in their lives. Don Gordon’s performance as Spain is a plus.

Specimen: Unknown was written by Stephen Lord and directed by Gerd Oswald. It went to air on February 24th 1964.

The crew members of an orbital space laboratory find some strange vaguely plant-like objects on the outside of the spacecraft. They decide, somewhat rashly, to bring them aboard to study them. They prove to be some kind of spores which, when exposed to artificial sunlight, grow into what appear to be plants. 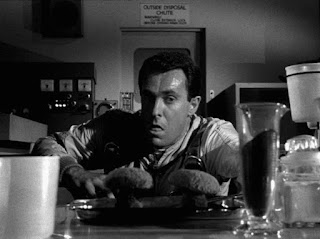 Unfortunately they prove to be deadly plants which give off poisonous gases and release hundreds of new spores. One crew member dies.

When it comes time for the space laboratory crew to board the shuttle craft for their return to Earth they decide, very rashly indeed, to bring the specimens with them. Those specimens then start releasing their poisonous gases and releasing new spores.

Ground control now faces a horrifying decision. Do they risk bringing the shuttle craft back to Earth with its four astronauts and its deadly cargo, or do they destroy the shuttle to ensure that those killer plants never reach Earth? Is it worth sacrificing four lives to protect many lives? Is it worth risking life on Earth in order to save those four men?

The most amazing thing about this episode is that it portrays the astronauts (and indeed the whole space program) as shockingly incompetent and dangerously reckless. When they first encounter the spores these astronauts (who are supposed to be scientists) take no precautions whatsoever in dealing with an alien life form that could potentially be dangerous. They make no effort to isolate the spores. They do not wear any protective gear. The guys at Ground Control are similarly clueless. They seem to have no notion whatsoever that the astronauts are behaving foolishly and recklessly.

On the whole this episode works extremely well.

Three episodes, two of them (The Bellero Shield and The Invisibles) very very good indeed and the third one pretty decent as well. At this stage of its first season The Outer Limits really was on a roll.
Posted by dfordoom at 03:19